Atlantic Sapphire replicates Atlantic salmons’ natural environment to raise salmon that taste as good as those from the wild.

Salmon are like people – without exercise, they get flabby. Wild salmon get plenty of exercise during their lifetimes swimming upstream and spawning. Atlantic Sapphire has combined the best of wild and farm-raised salmon with its technique of raising salmon by essentially creating an endless pool for them to swim in under controlled conditions. They swim against a current to create a firmer texture and more muscular structure.

“We are replicating the wild in our system,” Chairman and CEO Johan Andreassen says. “In our Oceanus aquaculture system, we are purifying the water and creating a current which is very strong and which turns the salmon into a product that is very similar to what wild Atlantic salmon would taste like. So it’s a very unique product”. 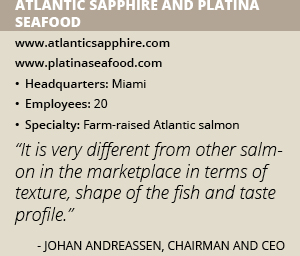 Atlantic Sapphire produces its salmon in Denmark where the company was founded. The salmon is exported to Europe and to restaurants and foodservice in the United States, where Platina Seafood is the exclusive importer.

The salmon Atlantic Sapphire exports to the United States are prepared and cleaned before shipment and range in weight from 6 to 10 pounds. “We bring in gutted whole fish fresh as well as fillets and portions,” Andreassen says. “We can also provide a restaurant-ready, skinless boneless portion.”

Controlled Conditions
Atlantic Sapphire salmon are raised under controlled conditions where their nutrition can be specified and harmful diseases kept away. Because of this, the company says its salmon have a delicate and clean flavor compared with salmon that have been farm-raised conventionally.

“Our salmon are raised with minimal impact on the environment, without any exposure to disease and predators and without the use of any pesticides or chemicals,” Andreassen declares. “So it’s a very clean product that is very safe and healthy.”

The company says the salmon are fed a diet of ultra-sustainable food including fishmeal that does not include any mammal ingredients. The raw material used to produce the feed is made only with off-cuts non-suitable for human consumption, which assures the best fish-in fish-out ratio. The feed is certified by IFFO, which ensures that it has been sourced sustainably. It’s also cleaned from PCBs and heavy metals and has no synthetic pigment.

Atlantic Sapphire uses a land-based recirculating aquaculture system to raise its salmon. These closed-loop facilities retain and treat the water within the system and are said to be environmentally sustainable. Atlantic Sapphire reports recycling 99 percent of their water and reducing the discharge of waste. Microfiltration and ultraviolet light technology purify the water so there is no need for antibiotics or chemicals to combat disease. The closed system also prevent fish and parasite escapes. Atlantic Sapphire salmon have been awarded the highest sustainable rankings of “best choice” by the Monterey Bay Aquarium’s Seafood Watch, SeaChoice and Ocean Wise.

Fish Farming
Atlantic Sapphire salmon are available on a consistent basis in the United States. “I think for anyone who is interested in tasting it, it is going to be a unique experience,” Andreassen promises. “It is very different from other salmon in the marketplace in terms of texture, shape of the fish and taste profile, and it comes with a fantastic green story. Because of the muscular texture that come from the strong current, it’s a very suitable fish to use for sushi. That is one of the best attributes of this product.”

Fresh and saltwater are used to raise the salmon. In the first stage of its life, salmon hatch and live in fresh water until reaching about 1 to 2 pounds in size. Then the fish proceed to the ocean, which is saltwater. This process is replicated in Atlantic Sapphire’s Oceanus Aquaculture System.

The lifetime of salmon is approximately 24 months from egg to harvest. Half the time is spent in freshwater and half in saltwater. “We have a very advanced filtration system so the water is as clean as possible,” Andreassen maintains. “That ensures our ability to do this product without using any antibiotics or pesticides, which is very crucial to keeping a clean product.”

Cleanliness and low stress are just two of the characteristics of Atlantic Sapphire’s fish farming methods. “We are trying to raise our fish without causing any unnecessary stress or harm to them,” Andreassen emphasizes. “We keep our salmon under one roof from hatch to harvest. So by keeping everything under one roof, we don’t have to do stressful movement of the fish. Once we harvest the fish, they are immediately stunned so they don’t suffer during the harvesting process. The quick, gentle end also results in a premium quality, because reducing stress results in less lactic acid buildup and a better flavor and texture profile.

For the near future, Andreassen plans to begin production in the United States. “This country consumes half a million tons of salmon a year, of which 98 percent of that salmon is imported, and most of that is flown in, principally from other places,” he says. “Our mission is to help move the industry in the right direction as a whole by implementing a new technology so we can produce a more sustainable product, reducing carbon footprints and having a product that is clean and without any impact on the environment or wild species.”