Cheeburger Cheeburger made its mark early among peers in the restaurant industry as one of the first to transition to serving all-natural protein products and ingredients, and quickly became a local favorite. Having been voted the best burger in town by media outlets in 29 cities, the company today is focused on expansion and developing new concepts that emphasis customer convenience.

The Fort Myers, Fla.-based company began as a full-service burger joint 31 years ago. Its 1950s-themed locations, which average 2,400 to 2,800 square feet, are outfitted with nostalgia pieces such as dining counters, neon lights and signs and posters from past decades while hits from the ’50s and ’60s play in the background. Customers are served at their tables by employees who pull out their chairs, hand them menus and even learn their first names.

“Not all but some people don’t want full-service and to be waited on all the time,” Director of Operations Charlie Eich says. “Some want to order and be left alone to read the paper or get up and go when they please. For that specific group of people, we are looking at self-service kiosks.”

On the opposite end of the spectrum, there are customers who prefer the complete dine-in experience, but are looking for expediency. “Subsequently, we have developed a ‘Call Ahead Dine-In program’ where the guest can phone in his or her order and have it hot and ready to be served to their table immediately upon arrival,” Eich adds.

Cheeburger is focused on cornering four segments of the food industry – full-service, non-traditional venues, fast casual and food trucks. Its goal is to be what its customers need when they need it, whether that’s running in and out for lunch or sitting down with the family for dinner. 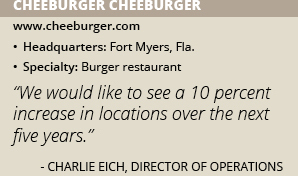 Concept Creation
Although still in development, Cheeburger’s fast-casual concept will have a smaller footprint of about 1,800 to 2,400 square feet and offer a condensed menu of core items. “We have our design department working on some décor enhancement,” Eich says. “It will still have the same basic feel, but much like our competitors, you are starting to see looks evolve. T.G.I Friday’s used to be known for their ‘flair’ and Applebee’s for items they had on the walls, but that’s all gone now.”

A Cheeburger franchisee in Montreal developed the company’s food truck concept, operating five trucks in the city that cater weddings and parties. Director of Franchise Sales Bill Petsos says the franchisee is so successful that next year he will be heading up the division in the United States.

The concepts can be developed in any market, but a number of factors including demographics determine which concept will succeed. “There’s room in every market for fast-casual, for example, but it would not be placed in the heart of the market,” Eich notes. “There are a lot of factors that play into that determination.”

Cheeburger expects the designs for its new fast-casual concept to be completed soon and a nationwide rollout of the locations in early 2018.

Brand Expansion
Last year, Cheeburger signed a master franchise deal and opened its first location in Riyadh, Saudi Arabia. This spring it added two more franchisees in Salt Lake City and Indianapolis, Ind. “We shoot for the moon and hope to land among the stars,” Eich says. “We would like to see a 10 percent increase in locations over the next five years, annually.”

Cheeburger’s master franchisee in Saudi Arabia plans to develop elsewhere in the Middle East with its first location open in Riyadh and prospects in Dubai and Kuwait. Cheeburger in Riyadh is much larger than the company’s U.S. locations, seating about 300 guests. The menu has traditional items like burgers, milkshakes, fries and onion rings, but the franchisee added dinner items like short ribs and lamb meatballs that appeal to the local culture.

“They hired a phenomenal design and branding company out of Lebanon to convey the brand to the Saudi Arabian culture,” Petsos says. “The location has a family section and a separate section for men only. The store is probably 8,000 square feet.”

The company continues to expand because of its loyal customer base. “From a national perspective, we keep, acquire and maintain our customer base because of our quality product,” Eich explains. “We don’t skimp or buy cheap stuff to save money. We have a higher quality of product so, yes, we spend the money and give our guests more than what they expect and exceed their expectations.”

Cheeburger uses a third-party delivery service while its staff and managers handle carryout. Secret shopper reports evaluate each location’s to-go order process and the company internally tracks and monitors the number of errors.

“There is a checks-and-balance system so a manager needs to sign off on the to-go order after an employee packs the order,” Eich explains. “We want to monitor the actual to-go time, focusing on the reality of what is an accurate time by placing devices of reference. The manager will set a device to the level of volume so front-end personnel can look at it and see we are at 18 minutes right now. That’s incredibly important to the guests.”