Skip to content
You are here:Home » Cheers to a great year in beer
Features
The Brewers Association, Beer 5 min read

With 2022 now underway, the Brewers Association is taking a look in the rearview mirror at a year filled with new growth, economic relief, supply chain disruptions, and innovation.

In 2021, the sales tide swung back toward breweries, bars, and restaurants, and many craft brewers began to see the path back to their former production volumes, if not new growth. Despite the pandemic, more than 9000 breweries operated in the United States in 2021, a six-percent increase from 2020. An increased brewery presence positively impacts the community – in 2020, small and independent American craft brewers contributed $62.1 billion to the U.S. economy. The industry also provided more than 400,000 total jobs, with nearly 140,000 jobs directly at breweries and brewpubs, including service staff at brewpubs.

Despite disruptions like weather, labor shortages, manufacturing delays, and more, craft brewers overcame obstacles and proved resilient. Many breweries were nimble and pivoted to packaging their product to bring in much-needed income when their primary sales channels – tasting rooms, brewpubs, bars, and restaurants – disappeared during the pandemic. In addition, breweries showed innovation across styles and flavor, and craft as a category continued to fill the innovation pipeline with new beers to return to pre-pandemic growth levels. 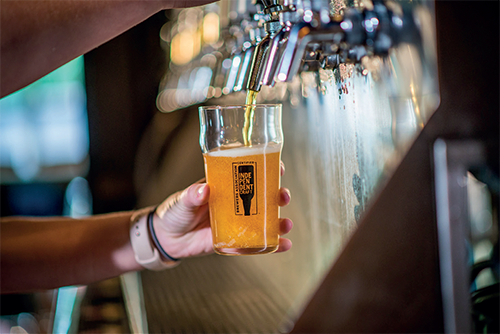 “Coming out of a challenging year, small and independent breweries persevered and found new ways to innovate among a changing environment and evolving consumer preferences and expectations,” said Bob Pease, president and CEO, Brewers Association. “Craft brewers’ ability to take risks, innovate flavors, and build better communities has made the US the craft beer capital of the world, and I can’t wait to see what next year brings for brewers and beer lovers alike.”

This year, supporting small brewers went beyond showing up at neighborhood tasting rooms, brewpubs, restaurants, and bars. In March 2021, the American Rescue Plan Act legislation created the Restaurant Revitalization Fund (RRF) – a $28.6 billion relief effort that provided grants to hospitality businesses. The initial legislation did not list breweries as being eligible for grants, but the Brewers Association fought hard to ensure that breweries would be included in the RESTAURANTS Act. Thanks to the BA’s efforts, approximately 1600 breweries received more than $450 million in grants and the association continues to advocate for full funding at the federal level. From fighting for more stringent antitrust enforcement by federal competition authorities to helping pass the Craft Beverage Modernization and Tax Reform Act to save brewers more than $80 million each year in federal excise taxes, to advocating for the passage of the USPS Shipping Equity Act, the fight for small brewers is ongoing.

“Government relief helped offset some of the economic damage brought in 2020, and the BA will continue to ensure that small and independent brewers’ voices are heard by federal agencies. Relief must be spread equally to protect and expand market access and ensure competition in the beer market,” said Bart Watson, chief economist, Brewers Association. “More work to rebuild growth and improve the industry remains for 2022, but 2021 showed progress on that journey.”

Given learnings from 2021, the Brewers Association predicts that in 2022:

The Brewers Association (BA)
The Brewers Association (BA) is the not-for-profit trade association dedicated to small and independent American brewers, their beers and the community of brewing enthusiasts. The BA represents 5600-plus US breweries and more than 38,000 homebrewers. The BA’s independent craft brewer seal is a widely adopted symbol that differentiates beers by small and independent craft brewers. The BA organizes events including the World Beer Cup®, Great American Beer Festival®, Craft Brewers Conference® & BrewExpo America®, SAVOR™: An American Craft Beer & Food Experience, Homebrew Con™, National Homebrew Competition and American Craft Beer Week®. The BA publishes The New Brewer® and Zymurgy® magazines, and Brewers Publications® is the leading publisher of brewing literature in the US. Beer lovers are invited to learn more about the dynamic world of craft beer at CraftBeer.com® and about homebrewing via the BA’s American Homebrewers Association® and the free Brew Guru® mobile app.

Check out the full 2021 Year in Beer report: www.brewersassociation.org/year-in-beer/