DaBecca takes an old-fashioned approach to its meat products.

Many in the food industry put an emphasis on high-tech methods, but sometimes the tried-and-true ways of doing things just can’t be beat. DaBecca Natural Foods Inc. has proven that fact with its chemical-free pork, poultry and beef products.

President Dave Pederson explains that the company’s roots go back more than 30 years to when he was a hog farmer in Texas. Although he raised the animals with care, “We had major issues raising them the high-tech way,” he recalls.

“The colleges were saying I should just give them more antibiotics,” he says. But the pigs had grown immune to the antibiotics and his farm suffered large losses of hogs. 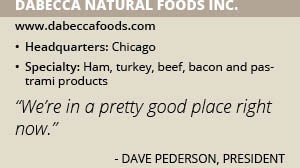 To recover, “We started raising them more closely to what Mother Nature had intended,” he recalls. Pederson chose to raise the animals on a vegetarian diet without any animal byproducts, antibiotics or growth stimulants and began using probiotics.

After Pederson fine-tuned his method, he found there were clients eager to buy antibiotic-free pork. When demand increased, he hired a local plant to slaughter hogs for him, which he sold to top health food stores and to the top hotels in Dallas, Houston and Austin, Texas.

Pederson also served all of the Whole Foods Markets locations in Texas and began packing the meat on his own. “We got our expertise from processing all of the hogs,” he recalls.

A Broad Reach
Today, Pederson manages DaBecca from its 100,000-square-foot processing plant in Chicago’s Pullman District. “We were very lucky to find and lease the current facility here in the Pullman district in south Chicago,” he says.

The company’s client base also has grown, he notes. “The consumer continues to expect antibiotic and hormone-free meat raised with plenty of room and high animal welfare standards,” he says. “Our organic sales are strong and continue to grow!”

In addition, DaBecca has customers in South Korea, Taiwan and Japan asking for its old fashioned products. “We expect to be in those markets in three to four months,” Pederson says.

DaBecca does not raise its animals anymore, but makes sure that it buys from farmers and suppliers who raise animals without using antibiotics, steroids or growth hormones. “These partnerships are marked with a dedication to the highest quality accountability and responsibility,” the company says.

“We develop partnerships with like-minded suppliers, farmers and ranchers who are concerned with animal welfare,” DaBecca says. These suppliers are partners in the Global Animal Partnership to certify animal welfare practices.

The non-profit organization, DaBecca explains, has created 5-Step Animal Welfare Rating Standards that rate how pigs, chickens and cattle are raised for meat. “It is our conviction the human treatment of animals should be guided by an attitude of care, responsibility and respect,” the company says.

Leading the Market
DaBecca’s dedication to its natural products has made it an innovator in its market, Pederson says. “We prefer to lead than follow,” he states, noting that this philosophy earned it the Official Best of Texas Award in 2009.

The company’s lines include sliced organic ham and turkey, bacon, roast beef and pastrami products. Unlike some of its competitors, the products are not full of added water but it does use natural spices and flavors. “It’s very close to the right texture you can make it without chemicals,” Pederson says. “We’re known to have a clean, old-fashioned flavor.”

DaBecca also creates natural smoked flavor in its products through wood chips, Pederson says. The company uses this method instead of using liquid-smoke, which has become an industry standard.

Key Partners
Pederson is proud of his team at DaBecca, which includes his son, Director of Operations Jon Pederson. “I taught him everything I know,” the elder Pederson says, “and Jon has filled in all of the blanks.”

“Brent started in accounting and did a great job working with the various accounts,” Pederson describes. “He has now transitioned to purchasing and scheduling.”

Although DaBecca does not operate with a 100 percent family oriented environment, “We care about the employees,” he asserts, noting that it is willing to expand. “There’s always room to come and join the team.” Pederson was always given opportunity so the company wants to provide it as well.

Pederson also praises its vendors, which include Kwalyti Tooling and Machinery Rebuilding Inc. Based in Batavia, Ill., the company specializes in providing parts, service and custom tooling for multiple applications.

“We have many packing machines,” Pederson says, noting that Kwalyti provides DaBecca with the right dies to fit the machines. “They’ve been very helpful and accommodating for us.”

He sees a strong future for DaBecca, which is seeing strong interest in the market. “There’s all kinds of people calling all the time,” Pederson says, noting that the company will grow while maintaining quality. “We’re in a pretty good place right now.”

But that does not mean DaBecca will rest on its laurels. “We have a very good mix of products but always work to improve the products with new recipes and processing procedures,” he says.

Being Free
DaBecca says it has promoted consumer health by selling antibiotic-free products. “Though the antibiotics prevent some diseases, they also cause animals to grow larger and fatter at an increased rate,” it states.

The antibiotics also lose their effectiveness over time, DaBecca says. “Eventually, as bacteria evolve to survive their environment, antibiotics become completely ineffective,” the company states. According to DaBecca, the continued sub-therapeutic use of antibiotics only causes bigger issues.

“Scientists are now saying that the antibiotics staying in the animals bodies are contributing to the overall level of antibiotics in the human body,” the company says. “This may contribute to antibiotic resistance, [and] scientists are more concerned about disease-causing bacteria that develops resistance in farm animals to then infect human beings.

“The FDA values an affordable meat supply, as well as the concerns of conventional livestock farmers,” DaBecca says, “however, its greatest concern is for human health.”

Antibiotic-free ranches also provide livestock with more room to move, maintain sanitary facilities, watch their animals and remove sick ones from herds. “By maintaining a healthy environment for the animals, this approach prevents diseases that antibiotics might otherwise be needed to fight,” the company says.

Staying Safe
DaBecca Natural Foods Inc. is committed to continuously improving its food safety program. “Quality Assurance is constantly involved in the process of developing new products for production,” it says, noting that it has a HACCP plan that is reassessed with regard to listeria monocytogenes.

Its listeria and environmental monitoring programs also are in compliance with 430.4 control of listeria monocytogenes in post-lethality exposed ready-to-eat products. The company also has a Sanitation Standard Operating Procedure Program.

“This meets all USDA requirements, as well as a Good Manufacturing Procedure program,” it adds. “An extensive environmental program is also in place, which helps us monitor the status of our equipment, along with our air and water quality.

“DaBecca Natural Foods raw products suppliers go through rigid reviews and requirements prior to becoming one of our suppliers,” the company says. “We are committed to excel in the manufacturing arena by producing the highest quality products in the marketplace.”

Perfect Products
DaBecca Natural Foods takes pride in providing all-natural foods that taste great. In fact, “Once you experience the flavor and quality of our products, we believe you will never settle for anything less,” the company says.

For example, its turkey selections are moist and tender with a natural texture, “carved to perfection just like on Thanksgiving Day,” DaBecca says.

In addition, DaBecca’s ham selections have earned accolades from both customers and critics. “The texture and taste will immediately remind you of a delicious holiday ham,” the company says.

“Our roast beef selections are just like the way Mom cooked it…deliciously tender, moist and oh-so-full of flavor,” it says, adding that it has won acclaim for its pastrami products. “In fact, our customers in New York say, ‘Wow! This is the best I’ve ever had!’”

DaBecca also highlights its bacon products, which are ideal for breakfast, lunch and dinner. “Our slow-smoked selections are favorites of five-star hotels and family dinner tables alike,” the company adds.

The products also have a long shelf life. “Our bacons, deli meats and hams freeze very well, and can be kept frozen for up to six months,” DaBecca says.

Avoiding Illnesses
DaBecca Natural Foods also avoids the use of nitrates or nitrites in its products, due to the problems associated with them. “Historically, nitrates have been used to help prevent the growth of certain bacteria that can cause an outbreak of botulism, a deadly food-borne illness, and to give cured meat a pink color,” the company says.

When nitrates are added to meat, they break down and form nitrites. “Today, nitrites are added directly to the meat to speed up the curing process,” Dabecca says, noting that the time and temperature in cooking meats are critical factors in preventing bacterial growth.

“Improved production and food storage methods have decreased food-borne illness,” the company continues. “In order to make the cooked meats to maintain the traditional pink color and cured flavor, nitrites are still added in most of today’s processing.

“According to the Environmental Protection Agency, the chief danger associated with nitrates is that they are converted into nitrites during digestion, which can poison humans, particularly children,” DaBecca says, noting that eating nitrate-added meat over long periods can result in nitrosamines that cause malignant tumor growth.

Oxygen deprivation, the company adds, is another risk associated with nitrates in meats. “This occurs when the nitrites band with hemoglobin the bloodstream, forming a molecule called methemoglobin, which is unable to unable to carry oxygen,” DaBecca says. “Young children are especially at risk from contact with nitrites.”

Important Values
DaBecca Natural Foods puts a high emphasis on how it serves its customers, vendors, owners, team members and the community. Not only does it place an emphasis on safe, superior products, “The customer is best served when working with a knowledgeable and courteous team at DaBecca,” it says.

“The owners are served when they make a fair return on their investment and continue to the well being of the customers, employees and the community,” the company continues. “The management and labor team are served when they are treated with generosity, respect and enabled to grow both as individuals and team members.

“The community is served when they are treated with respect and generosity from the DaBecca team and owners,” the company adds. DaBecca also has given smoked turkeys and funds to several organizations in its community that reach out and help others.