The diversity of DiMare Fresh’s products and services, as well as the company’s dedication to safe and efficient operations, help it stand apart in the U.S. produce industry.

The company offers a full line of tomatoes including round tomatoes, Roma tomatoes, grape tomatoes, tomatoes on the vine and organic tomatoes. In addition, the company carries a wide assortment of fresh produce including bell peppers, cucumbers, squash, onions, potatoes, avocados, lettuce, broccoli, celery, bananas, berries, citrus and ethnic items. “We have more than 1,800 fresh produce items serving every segment of the industry,” he adds. “We’re much more than just a tomato company.”

Produce is sourced from DiMare owned and operated farms, regional family owned farms as well as from preferred grower/shippers. 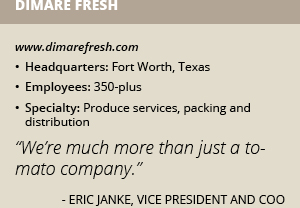 DiMare Fresh operates service centers in Tampa, Fla.; Scranton, Penn.; Chicago; Sacramento and Los Angeles; Dallas/Ft. Worth and Houston; and sales and QA offices in Nogales, Ariz., and McAllen, Texas. The company is positioned to service 90 percent of the United States population from these facilities, Janke says.

“We pride ourselves in offering the highest quality produce at a consistent value,” the company says. “Because of our diverse customer base, we are able to attain consistent value for our customers through optimal crop utilization. We continue to expand the company’s related offerings of full-line produce through wholesale ,retail distribution and cruise ship business, while maintaining our focus on food service operations in several locations.”

Setting the Pace
DiMare Fresh believes in staying ahead of the curve when it comes to the technology and systems it uses in its operations. “We are continually upgrading our facilities, systems and equipment with state-of-the-art technology,” the company says. “We believe the expertise of our people in the intricacies of the industry is second to none.”

DiMare Fresh considers itself to be a leader in the use of technological advancements as well as best practices in food safety, security and sustainability. The company regularly invests in its facilities and equipment to reduce its overall carbon offsets and overall fuel consumption, he adds.

DiMare Fresh transports produce to its customers using its own fleet of trucks. “We utilize the latest technology in temperature control and monitoring to ensure proper temperatures,” the company says. “Additionally, the air-ride suspension of our trucks reduces the impact on product shrink.”

The company follows strict HACCP and other industry food safety procedures, and is regularly has third-party audits performed. All DiMare Fresh service centers are Global Food Safety (GFS) certified and certified organic repacker/distributors. “We are proud of our high standards and the ratings we consistently maintain,” DiMare Fresh adds.

DiMare Fresh’s food safety program includes electronic product traceability as well as dedicated quality assurances and food safety practitioners at each of its sites. These practitioners are overseen by the company’s director of quality assurance and food safety. “Our food safety guidelines continually evolve on a day-to-day basis,” the company says. “We stay on top of customer and industry expectations with our priority being the safety and security of the food and services we provide, as well as the safety and security of our associates.”

DiMare Fresh’s suppliers also play a role in ensuring product safety. “We have a very stringent preferred vendor program that we expect our suppliers to comply with in regard to their financial stability, ethics, integrity, social responsibility and food safety and security,” Janke says.

Generations of Success
Though formally DiMare Fresh was established in 2003, the DiMare company traces its history back to 1928, when brothers Dominic, Joseph and Anthony DiMare started operating a pushcart filled with produce on the streets of Boston. The brothers quickly outgrew the pushcart and began operating storefront location before relocating its offices to South Boston in 1937.

Two years later, in 1939, the DiMare brothers began marketing produce nationally. To better serve the needs of emerging supermarket chains, the brothers formed alliances with tomato growers in Florida, Texas and California. At this time, DiMare Brothers also became the first produce company in New England to import tomatoes directly from Cuba, which gave their customers a year-round supply.

In 1945, the company planted fields of tomatoes and opened its first packing operation in Florida. A second facility and farm opened five years late in Newman, Calif., followed by further farm and packing operations in Florida and California as well as in South Carolina.

After several years of continued growth in the farming and packing operations, the DiMare family in the late 1980s decided to purchase existing repack operations across the United States. The first acquisition of this kind, Tampa-based JC Valenti, was followed two years later by the purchase of Los Angeles-based TAM Produce.

The DiMare family’s acquisition of certain assets of a multi-location repack/distribution operation in Jan. 2003 led directly to the creation of DiMare Fresh. “We have created a network of repacking and distribution facilities under the DiMare Fresh umbrella, which sells to the retail, food service and cruise line industries,” Janke says.

The DiMare family also operates farms in Immokalee, Homestead and Ruskin, all Fla.; Newman and Indio, both in Calif.; and Johns Island, S.C. Paul DiMare, the president of DiMare’s Florida operations and DiMare Fresh, Inc., was recently honored as Swisher Sweets/Sunbelt Ag Expo Florida Farmer of the Year for 2016. Paul’s cousin, Thomas DiMare, is the company’s president of the California operations.

Paul and Thomas DiMare represent the second generation of family ownership in the company; members of the DiMare family’s third and fourth generations are also involved in the company, Janke says.

The company plans to continue to evolve over the next few years. “we will have a greater diversification and services and product selection throughout all of our service centers,” he adds, noting the company is also looking into potential future acquisitions and partnerships. “We will also continue to look at developing growing operations outside of the United States.”