Dr. Frank King likens his bison corrals at Dr. King’s Farms® to the dinosaur paddocks of “Jurassic Park.” He handles not only the bison, but also the elk, yaks, Watusi cattle and camels humanely, naturally and safely. “We work with the animals rather than making them do what we want,” King says. “There’s an old saying that goes, ‘We can make a buffalo do anything that it wants to do.’”

King is a fourth-generation American farmer who holds two doctorates in naturopathic medicine and chiropractic medicine. He started a holistic clinic in 1979 and incorporated the benefits of nutrition into his practice. “I read a study about bison having less fat than fish and about half the calories of beef,” he explains. “I found many more benefits: Their lifespan is much longer than cattle, and bison helped the longevity of Native Americans who lived off of them. Studies indicated that they were all healthy compared to our Civil War generals. I was quite fascinated by that and in that process, I started providing my patients with bison meat and saw it was lowering their high cholesterol and triglycerides. They were stronger, their heartburn and allergies were gone. They were experiencing broad spectrum benefits and I was blown away.” 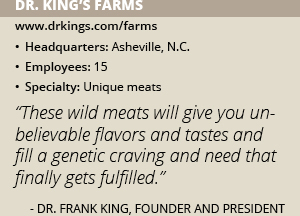 Because of these positive results, King began raising bison in 1985. His herd grew to be the largest on the East Coast. The company now sells the meat to the Harris Teeter grocery chain and to all 40 Earth Fare stores, a regional retailer similar to Whole Foods, as well as to chain burger restaurants and high-end restaurants. But it is quickly expanding its distribution across the country.

Heavy Research
King credits the success of the company to the research that supports these healthier meat alternatives to cows, chickens and pigs. He found that bison have two types of purities that make it better for people to consume in the long run. “There is the purity of the animals’ lifestyle and the purity of the genetics that goes back to prehistoric times and is how bison survived the Ice Age,” King explains. “It’s a fascinating story. These wild foods do so much more for people’s health than domestic foods. The chronic disease we see today is the largest pandemic the world has ever known. Lifestyles and what we eat has caused this. It’s something we need to be proactive about. We’re all like polar bears being released into the Death Valley desert. We’ve gotten away from our natural environment and natural foods. The further we get away from nature that nurtures us, the more we create negative gene expressions. Consuming the products from prehistoric animals like bison helps revitalize our healthy genetic roots.”

King even cultivates the grass grown on his farms to ensure the animals are ingesting GMO-free grasses. It takes years to seed in these natural, native grasses but the company has done it. “We found native grasses create better-tasting meat,” he says. “We’re always on the cutting-edge of research to discover those special grasses and natural supplements that enhance the quality of the meats. People think venison is kind of gamey, but we’re finding our wild meats are not gamey but sweet. We’re getting gourmet-quality meat from these animals by treating them especially humanely.

“We don’t want to factory farm them,” he adds. “We’re learning how to work with these animals and these native grasses. When you get the diversity of all the different natural plants in these special combinations, we bring out the best of the flavors in the meat.”

After discovering the benefits of bison, Dr. King’s Farms began researching other prehistoric-rooted animals that may bring additional health benefits. About a year-and-a-half ago, the company introduced elk and sold more than $1 million in the first year. This year, Dr. King’s Farms is introducing Watusi, a cattle breed that is native to Africa and the largest horned cow in the world, with all the genetics of a prehistoric animal. Dr. King’s herd is the largest in the Western Hemisphere.

“I’m convinced that the Watusi meat can help increase our human growth hormone,” Dr. King says, “which should help us live longer and age more gracefully and healthily. And from a foodie perspective, the meat has this wonderful buttery taste.”

Additionally this year, the farms are introducing the Himalayan yak, which has the highest Omega-3 content of any animal, according to King. “Omega-3 is the key to keeping our brain and hearts very healthy,” he says. “The meats are also very tasty, juicy. You should sear it to keep those healthy fats intact for the most benefit.”

Dr. King’s Farms also stewards 30 camels for their milk. King’s research found that an ounce of camel milk per day is helping people with diabetes, hepatitis, autism and certain cancers. But it is currently sold for about $18 per pint, so the company is hoping to reap some of those benefits as well. Soon, the farm also hopes to introduce emu because it’s one of the only red meats that people with the alpha-gal meat allergy can eat. “We’re tapping into these prehistoric animals, and it’s fun introducing these new meats from around the world,” King says.

Fulfilling Farm
Dr. King’s Farms is in the process of rapid growth and credits much of that to his passionate team. Everyone at the company focuses on how they can make positive changes in their lifestyles and the lifestyles of others through what they do. “Our principles are like New Year’s resolutions that actually work,” King says. “We have these 30 values that embrace what we call our company culture. I speak to all managers every week and coach them. The managers then coach their teams on these principles. They help us in our personal growth.”

The company is always forward-thinking in its research and acts of service. It hosts educational tours around the farm, hosts special events for kids with special needs and donates food to animal rescues. King says the company thinks local, but acts global and hopes to take the company and its products to the next level.

“I’m most fulfilled about discovering these secrets in ancient foods that can help people so much,” he says. “It’s all about helping people for me. We’re all suffering almost needlessly with health problems. Once we balance our health with sustaining foods, we can sustain our lives at a higher level.”

As for his favorite prehistoric, natural meat, King says it depends on his mood but that they’re all delicious. “My wife and I have a joke that when we eat other meat, we feel guilty – that we’ve committed meat adultery,” he says, laughing. “But once you’ve tasted them all, you’ll get cravings for them. It’s healthy to want diversity in the meat you eat. I like to say, ‘Once you’ve had yak, you won’t want to go back.’ These wild meats will give you unbelievable flavors and tastes and fill a genetic craving and need that finally gets fulfilled.”