In an effort to grow its brand, Energy North Group wants to make a name for itself among its East Coast clientele.

Established in 1985, the gas vendor started out primarily selling gas and diesel fuels. As Energy North Group grew, it got into the convenience store retail end. “We’re trying to grow that side of the business,” claims Jonathan Ketchum, vice president of retail. “We want to be known as a quality food provider.”

In addition to refreshing its retail outlets with new shelving and uniform floor plans, the company has also revamped its food offerings. “One of the telling issues we discovered is customers told us, ‘you just don’t have anything I want to eat [in your stores]’,” Ketchum says. As a result, Energy North Group’s convenience stores have downplayed the sugary, fatty snacks for more healthful foods. “Our number one category is alternative snacks, which includes protein and energy bars, and fortified waters,” he says. 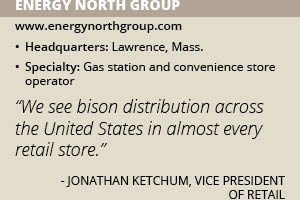 The company currently has 41 sites across six New England states and New York, 26 of which have full-blown convenience stores. Ketchum claims that each location tailors its product offerings to its store’s specific clientele. For example, it has a location in Boston near Logan Airport. “That store is more of a ‘grab-and-go’ stop for packaged goods for commuters filling their rental cars before they catch their flight,” he says. “Our neighborhood stores offer more food service options.”

“We’ve added branded food service to some of our smaller stores in New England,” Ketchum says. “We’ve leased space [in some of our stores] to Dunkin Donuts and Subway to provide recognized brands to our customers.” Additionally, Energy North Group is currently a franchisee of several Subway stores. “We want to grow our Subway network, but run it with our own staff so we can maintain Energy North Group’s customer-first approach,” he says.

Another branding opportunity the company has begun is selling freshly-baked cookies in their stores. “Using small ovens, small batches of cookies are baked in the store to entice customers,” declares Ketchum. “We feel that it’s a signature item we can become known for to increase our brand awareness.”

As a result, Ketchum claims Energy North Group is being accepted more by its consumers as a quality food provider. “We want to keep people in our stores by providing wi-fi charging stations and seating for on-site dining,” he says. “We want them to feel comfortable in our stores – hopefully, they’ll want to come back.”

Industry Changes
“With cars becoming more fuel efficient and declining dependence on gasoline, we’re seeing a transformation in this industry,” Ketchum says. “We want to build up a loyalty through our convenience stores and restaurants to keep customers coming back.”

The company also has implemented delivery systems in some stores. “We’re working with a third-party organization to provide delivery services,” he states. “It’s another way to build loyalty in our brand – so when customers think about something they need, we’ll be the first to mind.” Energy North Group is also planning to institute a customer loyalty program to provide discounts and special offers for returning clients.

As customer service is a primary focus of its efforts, Energy North Group tries to attract quality applicants. “We offer progressive pay, bonus incentives and opportunities for career growth,” says Ketchum. “We feel if we treat our people right, they’ll do a good job for us.”

“[Management] is very open and honest with its workers,” claims Ketchum. “[Energy North Group] treats its employees with respect and makes them feel part of the organization.”

“I like to think our stores provide a better shopping experience for our customers,” notes Ketchum. “In addition to keeping our stores clean and safe, we want to maintain a positive customer experience by hiring quality people.”