Skip to content
You are here:Home » FultonFishMarket.com
Insights
4 min read

Attaining fresh seafood isn’t always easy for landlocked locations that don’t have access to fishing docks. Most of the seafood consumed in such locations has been frozen at least once, traveled thousands of miles and been handled by more than a dozen hands.

“And most of it is simply not very good, which is why Americans eat half the seafood per capita of the rest of the developed world,” says Mike Spindler, CEO of FultonFishMarket.com, a newly established e-commerce website that offers Americans national access to the largest fresh seafood market in the western hemisphere.

FultonFishMarket.com has mastered the behind-the-scenes science required to deliver fresh and sustainable seafood to some of America’s top restaurants, chefs and retailers, as well as individual consumers. It is a new digital distribution channel for the New Fulton Fish Market, the 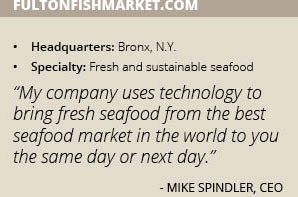 largest seafood market in the world by assortment.

Based in Bronx, N.Y., New Fulton Fish Market is 30 times larger than any other seafood source in the western hemisphere and second in size worldwide only to Tokyo’s Tsukiji wholesale seafood market.

“The Fulton Fish Market offers hundreds of different varieties and two million pounds of fresh fish each night,” Spindler says. “If you go to your local restaurant, the average piece of fish has traveled 5,000 miles to get there and it’s been frozen. My company uses technology to bring fresh seafood from the best seafood market in the world to you the same day or next day.”

In an industry that has been somewhat opaque and slow to deliver, FultonFishMarket.com offers transparency, sustainability and super-fast delivery.

It aggregates national orders from restaurants, seafood retailers, channel partners and other food service industry players, as well as direct orders from consumers, until 1 a.m. EST daily. Before the 1 a.m. deadline, its systems forecast product needs, recommend suppliers and quote prices into tablets that are used by FultonFishMarket.com’s personal fishmongers, who handpick each piece of fish.

“We pick it at 1 a.m. and our customers have it in time for lunch,” Spindler says. “About 95 percent of seafood available today has been frozen and comes from overseas and 25 to 40 percent of what is available has been misrepresented. Our product is fresh, never frozen and always what we say it is.”

Each morning, FultonFishMarket.com’s mongers survey more than two dozen multi-generational seafood vendors who make up the New Fulton Fish Market and have the authority to override orders if the seafood doesn’t measure up for quality or availability reasons – which is recorded in the company’s system.

Once the seafood passes their inspection, it is moved to a 500,000-square-foot facility in Bronx, N.Y., where it is cut-to-order, packaged, bar-coded and shipped. “The process and the plant look very much like an Amazon or any other modern e-commerce plant,” Spindler says.

Although FultonFishMarket.com was founded in 2013, it took several years before the company started selling products. It spent years building its online product library, testing out packaging solutions and ironing out distribution logistics.

“We sent 20,000 pounds of product to ourselves at different addresses across the country to determine which packaging would work,” Spindler says, adding that they couldn’t find existing packaging that measured up to their standards. “So, we designed our own liners and packages and had a company make it. It had to be responsible from an ecological standpoint and had to do the job.”

It also took years to build FultonFishMarket.com’s database of fish that includes images, information about taste characteristics, where the fish comes from and how to prepare it.

For example, FultonFishMarket.com has cataloged roughly 150 different types of oysters in its database. Oysters are a top-seller along with prime salmon, tuna, halibut, soft shell crabs, bluefish, sea bass, squid and calamari.

“We started selling product on our website in 2016 and we have doubled sales to businesses and consumers every year since then,” Spindler says. “What makes us unique is the amount of time it takes us to get the product from the water to the plate.”