After more than a century, the Gasparilla Inn & Club still ranks as a premier travel destination.

The Gasparilla Inn & Club is a survivor. It has persevered through both world wars, witnessed the civil rights movement and faced the new millennium. While other Florida resorts have come and gone, the Gasparilla remains standing.

Located at the tip of Florida’s Boca Grande Island, this historic resort – originally built in 1913 as a destination point for wealthy northerners – has played host to a number of famous guests over the decades. They have included tycoons Henry Ford, Harvey Firestone and J.P. Morgan. Thomas Edison, actress Katharine Hepburn and the families of George H.W. Bush and Henry DuPont have graced the resort with their presence as well.

Today, the Gasparilla still ranks as a premier destination for the rich – only now it it’s also popular with the middle class. “It depends on the time of the year,” General Manager Jon Reecher says.

During its social season, from late December until Easter, guests are expected to adhere to a dress code. In other months, things are a bit more relaxed. Rooms typically average between $265 to $395 per night, depending on the season and the room type. The resort offers close to 140 rooms, suites and cottages. 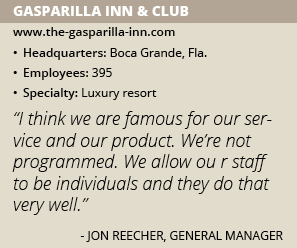 “I think our guests don’t mind spending an extra few dollars for a great experience,” Reecher says. “But then they expect that experience to be great.”

That shouldn’t be difficult. The resort is studded with luxurious amenities and the location alone resembles paradise. Considered a crown jewel, the Pete Dye Signature 18-hole Championship Course is a major attraction for golfers from around the world. The par 72, 6,837-yard course on Charlotte Harbor has practice facilities and guests can sign up for lessons from the club’s PGA professionals.

“It’s unique because the golf course is its own island,” Reecher says. “Sixteen holes are on the island and the two others are behind the hotel.”

Big Fish
Another attraction is a 250-slip marina that is home base for some of the best tarpon fishing in the world. A few guests have been lucky enough to catch 200-pound tarpons, though the average catch is between 75 to 115 pounds, Reecher says.

Gasparilla Island is one of a string of barrier islands along the southwest Gulf Coast between Fort Myers and Tampa. It is bordered by the azure waters of the Gulf of Mexico, Charlotte Harbor, Little Gasparilla Pass and the Boca Grande Pass.

Food is another attractive feature on the island. The resort has five restaurants and two lounges. Guests can casually dine on imaginative regional cuisine, seafood and steaks at the Pink Elephant, situated along the scenic Boca Grande Bayou. For those seeking a fine dining experience, the Gasparilla’s main dining room is the place to be.

When it comes to shopping, Gasparilla Island offers a wide variety of retail items and accessories in The Inn shop, The Inn Boutique or the Golf, Tennis and Spa/Salon shops. In addition, the shops of the nearby village of Boca Grande are within easy walking distance of the resort.

Top Ranking
Owned by the William S. Farish family, Gasparilla’s hotel is one of the oldest wooden structures in Florida. William Farish is a former United States Ambassador to the United Kingdom, and his wife, Sarah, is the only daughter of the late Bayard Sharp, noted horse breeder and owner. The resort employs more than 325 people on a seasonal basis and continues many of its original traditions, including afternoon tea during its social season.

In 2016, Gasparilla was named the No. 1 Florida Resort, No. 14 in the United States and No. 49 in the World by the readers of Travel + Leisure magazine. The resort was named the No. 1 resort on Florida’s gulf coast in Condé Nast Traveler magazine’s annual Readers’ Choice Awards Survey in 2016.

“I think we are famous for our service and our product,” Reecher says. “We’re not programmed. We allow our staff to be individuals and they do that very well.”