A burger may seem as American as baseball and apple pie, but one Canadian burger chain plans to carefully crack the U.S. market with its particular brand that emphasizes sustainability.

Toronto-based Hero Certified Burgers has 57 locations in Ontario, with plans to open about a dozen more stores in the greater Toronto area in 2014. Also this year, the chain will expand just over the border in upstate New York with two of its first U.S. locations.

“There’s going to be a big effort on our part to understand how our concept will translate in the U.S.,” CEO John Lettieri says. “Even though we’re neighbors, it’s a different culture with different consumption patterns.”

But not so different. Consumer concern over locally sourced food and ethically raised meat has grown strong enough in both countries that it has reached even the quick-service burger space – at least among individual burger joints and smaller, regional chains – on either side of the border.

However, “We push the envelope by having full traceability of our beef,” Lettieri says. “We have direct contact with our ranchers.” 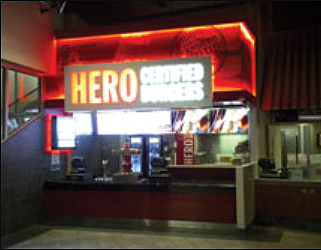 To be designated Heritage Angus beef, it must come from free-range, grass-fed cattle that are given no antibiotics or growth hormones. The beef must be fully traceable from pasture to plate and contain no preservatives or additives.

The company was started in 2003 and began offering Heritage Angus Beef about six years ago. In that time, “There’s been tremendous change in understanding how meat is sourced and food is processed,” Lettieri says. “We’re giving our customers transparency about their food.”

At Hero, sustainability extends to more than just the burger. Lettieri is working toward offering a menu that is completely free of genetically modified food. GMO-free, Ontario-grown greenhouse tomatoes were recently added as toppings. Some condiments are already GMO-free, and the buns will be, too, in a matter of months.

The chain also uses a new type of packaging that is produced from 100 percent recycled paper and uses 35 percent to 70 percent less paper per piece than other fast-food packaging.

Lettieri, 51, has been in the food industry his whole life. A cheesemaker by trade and at heart, Lettieri offers a step-up from standard cheese options – including Gorgonzola, smoked provolone and Brie – on his burgers.

Sustainability efforts do make for a costlier product, for which a certain consumer segment is willing to pay, Lettieri has found. A meal at Hero – a burger, fries and drink – costs an average of $10. “Our target customer is typically 30 and older and educated,” Lettieri says. “They understand a premium product costs a bit more.”