Hightop Hospitality looks to expand in the upper Midwest.

Paul Dzubnar brings a unique perspective to the hospitality industry. A restaurant veteran since 2002, he worked his way up the ranks to become the CEO and owner of Hightop Hospitality.

Before his hospitality career, he graduated from the Air Force Academy and worked for Minneapolis-based Target, building and operating distribution centers for the retailer. Through mutual friends he met the founder of St. Paul-based Green Mill restaurants, who offered him a job. “I started as a turnaround guy,” Dzubnar recalls. “I was able to turnaround a few restaurants and have success, so I eventually became a district manager.” 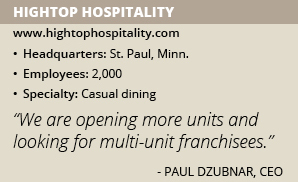 Dzubnar also holds an MBA from Rutgers University, so he is more than comfortable reviewing income statements, balance sheets and cash flow statements to aid in determining where the inefficiencies of an operation exist. But his experience with Green Mill was much more than that, as he learned everything from the finer points of managing a staff to running the broiler. “I could see who the great performers and leaders were,” Dzubnar says. “With my first restaurant turnaround, we put more staff on and gave workers more support, giving them confidence.”

Setting the Tone
It can be notoriously difficult to run restaurants, especially in a culture where there is high turnover. Dzubnar’s early experience set the tone for a leadership role with the company. “Once the employees knew they had more support, they performed at a higher level, eventually leading to higher customer satisfaction,” Dzubnar recalls. “Momentum continued and led to more success.”

Dzubnar worked his way up the operations ranks while also opening his own Green Mill restaurant. In 2007, he became President of the franchisor and eventually became the largest franchisee with 8 locations. Finally, in 2010, Dzubnar purchased the Green Mill Franchise Company from its founder.

In 2011, he created another concept, Crooked Pint Ale House, an upscale pub in Minneapolis, to expand the brand’s portfolio. Today, the parent company, Hightop Hospitality operates and franchises two brands, Crooked Pint and Green Mill. Together, they have 33 restaurants in Minnesota, Wisconsin, North Dakota and Kansas, along with three catering companies and a frozen foods company.

Crooked Pint is an upscale pub with the feel of a neighborhood restaurant. It features 32 craft beers on tap, many of them locally brewed. The restaurants are known for their “Juicy Lucys,” where ingredients are stuffed inside the burger patty. Crooked Pint stuffs its burgers with beer cheese, peanut butter and jalapenos, just to name a few. Juicy Lucys are a regional favorite in Minnesota and recently Crooked Pint was voted the best in the state through a 2017 USA Today Reader’s Choice poll. “We were competing against brands that have been known for Juicy Lucys for years,” Dzubnar noted. “We were very excited and pleased to come out on top”

As anyone who has lived in the Midwest will attest, people love to eat outside when the weather allows. In an effort to take advantage of nice weather, Crooked Pint Ale Houses feature patios including a few where the roof is retractable.

Green Mill’s roots date back to 1935, and it is still the oldest licensed pub in St. Paul. In 1975, the owners went to Chicago and fell in love with deep dish pizza and added their version to the menu. “We do a lot of our own scratch cooking,” Dzubnar notes. “We still make our own pizza and pasta sauces along with made-from-scratch dough and bread daily. That’s what makes us different, along with a focus on quality in our ingredients, food presentation, service and overall ambiance.”

For both brands, Dzubnar and his team put a great deal of time and effort into keeping the menus fresh, updated and unique, while ensuring local favorites are the foundation of the diverse menus.

Upper-Midwest Expansion
With a formula that clearly resonates in Minnesota, Hightop Hospitality plans to expand its footprint throughout the upper Midwest. A Crooked Pint Ale House is slated to open this Fall paired with a full-service Holiday Inn hotel in Sioux Falls, S.D. Another Crooked Pint restaurant will be opening in Grand Forks, N.D., in 2017 this Fall as well.

Though Green Mill and Crooked Pint remain well-known names in Minnesota, Dzubnar is excited about future expansion. “We’ve got two great and different brands to offer prospective franchisees. We are opening more units and gaining a lot of interest,” Dzubnar notes. “We continue to look for multi-unit franchisees.”

In addition to its restaurants, Hightop also does extensive catering for weddings, corporate events, holiday parties and more. This is done through three distinct brands:

* Deco Catering, which has a European feel to its offerings;

* Green Mill Catering, offering some menu items from the restaurants and other unique fare

* Sterling Catering, which offers a more upscale menu than the other two.

As Hightop continues to grow, Dzubnar is mindful that a dedicated staff has made it possible. “I see a lot of our management staff work their way up through the ranks that care about the brand and the people they work with,” Dzubnar says. “Out of everything we have accomplished, I am most proud of that.”