There’s a new vodka on the market – and it’s the only one of its kind. Most vodkas are made from fermented grains such as sorghum, corn, rice, rye, wheat or even potatoes.

But now there’s PAU Maui Vodka, which is made from Hawaiian spring water, Maui Gold Pineapples and other natural ingredients found in Maui. It is distilled through unique glass stills, creating a crisp and clean vodka that personifies the luscious volcanic slopes and sandy beaches of its home.

Manufactured in Maui by LeVecke Wine, Beer & Spirits, PAU Maui Vodka is the newest and fastest-growing brand for the Mira Loma, Calif.-based company.

“It’s the first and only vodka distilled from pineapple,” says Joe LeVecke, president of the family-owned company, which is one of the highest- 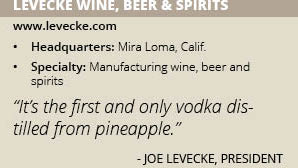 volume distilled spirits providers in the United States producing more than 2,500 different brands. “PAU Maui Vodka is distilled to absolute purity leaving only a hint of sweetness on the back end.”

Developed in 2006, PAU Maui Vodka – along with a number of other unique Hawaiian spirits – is produced in Maui at the company’s Hali’imaile Distilling Company, a true craft distillery nestled on the slopes of Haleakala Crater amongst pineapple fields.

“My father and uncle wanted to open a distillery in Maui and create something authentically Hawaiian,” LeVecke says. “They tried distilling other indigenous fruits or vegetables but pineapple proved to be, by far, the best.”

PAU Maui Vodka was initially only available in Hawaii. But LeVecke brought it to the West Coast last year and now has nationwide distribution The company is also in the process of taking the brand global.

“It’s a really fast-growing brand for our company,” LeVecke says. “We’re excited about its growth potential.”

Reminiscent of a London Dry, it exhibits a juniper-first profile with an aromatic fresh-cut floral and citrus bouquet, smooth enough to enjoy neat but bursting with Hawaiian botanicals that stand up to any cocktail mixer.

“We started it about three years ago,” LeVecke says. “It’s primarily sold in Hawaii but we’re starting to distribute on the mainland, primarily in southern California. Our plan is to take it to nationwide distribution in the next 12 months.”

LeVecke Wine, Beer & Spirits has a 180,000-square-foot manufacturing facility and two warehouses in Mira Loma, Calif. One of its fast-growing brands that’s manufactured on the mainland is Jesse James Bourbon Whiskey, in partnership with Jesse James Dupree, lead singer of the rock band Jackyl.

“Canned RTD products are the fastest growing segment in our industry,” LeVecke says. “Because of its pace, there’s an extreme lack of capacity for manufacturing, especially on the West Coast. We have had a surge of brand owners knocking down our doors to get production time on our canning lines.”

“It’s going to be a big part of our business going forward,” LeVecke says. “We foresee investing in another canning line within the next few years based on how fast it’s growing.”

Although the company has seen lots of growth, LeVecke Wine, Beer & Spirits remains a family-owned company since William R. LeVecke and his sons, Reed and Neil LeVecke Sr., founded it in 1949.

“It was started by my great grandfather,” LeVecke says. “My cousins and I are humbled to be part of the fourth generation of family leadership.”

Current family members involved in the business include his father Tim LeVecke (chairman) and his uncle Neil LeVecke (CEO). In addition, two of his cousins and brother-in-law run sales, marketing and operations.

The multi-faceted company is a brand builder, importing, representing and building national brands across the globe. It also has the experience of decades long support, supplying every national retail chain in the country.