Much has changed for Mary Ann’s Specialty Foods since founder William “Bill” Korleski first set up shop in a small meat locker plant in Iowa in 1965. The company has relocated, greatly expanded its meat processing capabilities, added new products and reached out to customers far beyond its geographic home base.

One thing has remained the same for Mary Ann’s, named for Korleski’s wife. “We continue to stand by the model that we’ve always had in our business, which is to make the best products in traditional manners that allow time for marinating, curing and seasoning and not rushing processing to cut a penny here and there,” says co-owner Kelly Korleski, William’s son. “We want to make products people see as having higher quality and higher value and as being above the standard of products they see in the market.”

Mary Ann’s specializes in processing meats including pork, beef, chicken and turkey. The company’s products include Kor-Bert bone-in and boneless pit ham, a favorite of families throughout Iowa, Minnesota and Wisconsin. Other products include bacon, bratwurst, kielbasa, chorizo and other varieties of sausage. 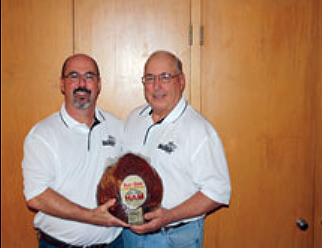 Korleski says all of Mary Ann’s Specialty Foods’ products have one thing in common: their great taste and rich flavor. “We want to make products with great flavor profiles using all-natural processes,” he says. “We believe that if you make a product that tastes better than the rest, people will continue to come back and buy it.”

The company’s cooking and curing methods include using wood chips in smokehouses to prepare applewood-smoked pork products. Many products are also produced without the use of nitrites and nitrates, a method that has become more prevalent in the industry in recent years. William Korleski was an early adapter of eliminating nitrites and nitrates from the curing process.

“He was ahead of his time, as he saw the opportunity in the late 1970s to go to market with no-nitrate sausage, bacon and hams, but saw the industry wasn’t ready for that at that time, so he continued working on traditional items,” Kelly Korleski adds. “Now things have come full circle, and today we produce several no-nitrite items.”

Other attributes have become popular as well, such as meats derived from antibiotic free pork or  grass-fed beef. “Consumers have a greater awareness and are more interested in knowing where their food comes from,” Korleski says. “We make a concerted effort to explain where our product is derived and use simple ingredients so consumers can make an informed choice.”

Mary Ann’s produces all of its meats in an 80,000-square-foot facility in Webster City, Iowa, a far cry from the small meat locker plant William Korleski purchased in 1965.

Korleski’s first major expansion came in 1979, when he built a 20,000 square-foot processing plant that allowed him to increase production of smoked meats. This included the Kor-Bert brand of hams, introduced years earlier and named for William Korleski and then-business partner Dennis Bertilson. Bertilson sold his part of the business to Korleski in the 1980s. The company became known as Mary Ann’s Specialty Foods in 1993, when William and Mary Ann Korleski purchased its current facility.

Korleski and other managers also take a hands-on approach to processing plant operations. “We’re very involved in the business and treat our employees like they are family,” he says. “We understand our employees because we’ve all worked on the floor and made products right alongside them.”

Mary Ann’s continues to grow its manufacturing and processing capabilities. In recent years, the company expanded its ham and bacon processing lines to meet customers’ demands for both larger and smaller package sizes. “We excel at reacting quickly and effectively to our customers’ needs,” Kelly Korleski says. “Because we are a  family owned business, we have the flexibility to work with customers and meet their demands in ways other companies cannot.”