Morada Produce was built on a strong tradition of farming that stretches back more than 100 years. Owner Skip Foppiano’s great-grandparents were among the earliest settlers in the area that is now Waterloo in central California, and they planted one of the first walnut orchards in the region.

Today, Morada Produce continues to tend the Foppiano family’s walnut orchards and concentrates on growing the finest walnuts in the industry along with other types of produce. Production Manager Scott Brown says that despite the fact that the company is relatively young, its heritage of farming tradition has given it the tools it needs to succeed.

Morada Produce concentrates on growing, packing and shipping walnuts, cherries, onions and bell peppers. In addition to its own walnut orchard, Morada Produce works with other growers in the area to pack and ship their produce to customers. More than half of Morada Produce’s volume is grown and owned by the company, and it operates two brands: Morada Produce Company and Morada Nut Company. 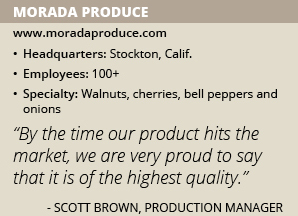 Although the last few years have been challenging due to the drought California has experienced, Brown says Morada Produce has continued to find ways to succeed. This is due in no small part to the natural advantages of growing in the San Joaquin Valley, but Brown also credits the company’s willingness to embrace technology and find innovative solutions for its continued success. Brown says Morada Produce leverages its heritage and its forward-thinking outlook to maintain its position as an industry leader.

Location and Technology
One of the biggest advantages Morada Produce has over its competition is simply its location. Brown says the company is extremely fortunate to be based in the San Joaquin Valley, where some of the best produce in the nation is grown. “We have ideal growing conditions,” Brown says.

Even though the company enjoys some of the best conditions for growing in the United States, Brown says Morada Produce still continues to look for ways it can distinguish itself from the competition even further. “We’re really looking to put ourselves in the upper tier,” he says. Although the company has a long heritage of farming history behind it, Brown says Morada Produce remains a relatively young company. He says this gives the company a significant advantage because it means the company can look at the challenges of the industry with fresh eyes and come up with innovative solutions because it isn’t beholden to the established ways of doing things. “We’re thinking outside of the box,” Brown says.

A big part of that is the company’s embrace of modern technology in its operations. Brown says Morada Produce has integrated advanced sorting technology in its packing facility to reduce the amount of scuffing and other types of damage that can happen to walnuts during processing, and adds that the company works closely with equipment manufacturers. “We’re constantly advancing with the manufacturers we’re working with,” he says. “By the time our product hits the market, we are very proud to say that it is of the highest quality.”

Challenging Conditions
Morada Produce is fortunate to be located in the San Joaquin Valley, but the company has had to contend with the extensive drought that has affected California in recent years. “One of the primary challenges that we have is that Mother Nature here in California hasn’t been very nice,” Brown says.

The consistent lack of water in the region has made it necessary for Morada Produce to find more efficient and sustainable solutions for its water management. For example, the company reuses 100 percent of the water used during its cherry processing to irrigate its walnut orchard. Brown says the company also works extensively with academic resources to find technology-based solutions such as neutron probe ground moisture indicators and micro-emitter sprinkler systems for its custom irrigation system. Brown says that by utilizing technology in this way and constantly adjusting its cultural practices, Morada Produce is better prepared than many of its competitors for the continued effects of the drought.

Planning for the Future
Brown says technology will continue to play a critical role in the success of Morada Produce, and will serve to help the company expand its brands and bring more premium products to the market, such as the Chandler walnut variety. He says this type of walnut is becoming more prevalent in the market thanks to its higher edible yield, and Morada Produce has the technology in place to take full advantage of it. “We don’t want it to look processed, we want it to look hand-shelled,” Brown says.

By continuing to focus on premium products and increased throughput via automation technology, Brown says Morada Produce is poised to meet its goals. “The expansion into every market in the world is our objective, and a goal that we’re very confident that we’re going to achieve,” he says.