Nathel & Nathel has supplied some of the best produce in New York City for more than 90 years.

Nathel & Nathel owner Ira Nathel says the company does business much the same today as it did when his grandfather helped found the company in 1922. Daniel Nathel and his partner started the company after being successful as pushcart peddlers on the Lower East Side of New York City, setting up shop in the city’s Washington Market before moving up to the Huntspoint Market in the Bronx in the 1960s. Today, nearly 80 percent of the company’s produce sales are made at the market, just as they were more than 90 years ago.

Nathel & Nathel continues to focus on wholesaling fresh produce to a variety of customers in and around the New York City area. Nathel says the company’s customers are primarily small retailers, but the company also has a significant number of supermarkets, restaurants and purveyors among its customer base. In every segment of the market it serves, Nathel & Nathel is at or near the top, according to Nathel. “I would say we are market leaders,” he says. “We are known to sell the highest-quality fruits and vegetables in the market.”

Beyond the high quality of its produce, however, Nathel & Nathel also boasts other advantages that set it further apart from its competition. Thanks in large part to the people it employs, its scale and its speed to market, the company has enjoyed nearly 95 years of success, and the company expects that trend to continue well into the future. 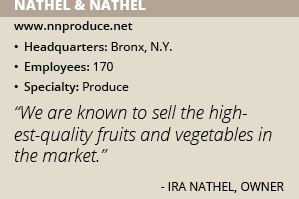 Bigger is Better
Although Nathel & Nathel prides itself on the high quality of the fruits and vegetables it supplies for its clients, that’s not the only way in which the company distinguishes itself. One of the company’s strongest advantages dates back to 1999, when it did something no other wholesaler at the Huntspoint Market had done up to that point. At that time, Nathel explains, the company occupied approximately two and two-thirds units at the market, each unit measuring about 25 feet wide and 100 feet deep. Seeing an opportunity to expand, Nathel & Nathel sold off its units and purchased seven and a half units at the end of its row.

Over the ensuring years, Nathel & Nathel continued to invest in larger and larger spaces at the market, and today the company holds the largest presence at Huntspoint Market with 24 and a half units. According to Nathel, the size the company brings to the marketplace means it can assure its customers that they are getting the full benefits of its economies of scale. “We’re a large firm, so we have a lot of buying power with the vendors that supply us,” Nathel says. “We try to buy the best product that we can source and then compete on price.”

Also working in Nathel & Nathel’s favor is the company’s large and diverse customer base, which Nathel describes as being “very wide at the bottom.” None of the company’s customers represent more than 2 or 3 percent of its total sales, so it can move products very quickly and ensure customers will have the freshest produce available. Nathel says the company turns over its inventory every one and a half days on average, or approximately 200 times a year.

That speed, plus the company’s emphasis on customer service, means Nathel & Nathel can take the worry off customers’ plates about having to commit to unnecessarily large amounts of inventory in their own facilities. “We tell people that they should be using us as their warehouse,” Nathel says.

Watching Trends
Nathel says that although the company has been successful doing things according to the way it did things years ago, that does not mean Nathel & Nathel is not looking into the future. The company continues to stay on top of the latest trends in the marketplace and find new ways to keep its customers happy. For example, the growing organic and sustainable produce movement has become something Nathel & Nathel has paid more attention to in recent years. “We’re getting more into organics, and we source more local product when it’s available,” Nathel says. “We see the organic sector as a growing sector.”

One trend Nathel says he is concerned about is the impact of new food safety regulations on the Huntspoint Market facilities. “We’re in an antiquiated market, the market was built in 1967,” he says, adding that the company is watching to see how the facilities will need to be upgraded to meet the more stringent food safety regulations that may be coming in the near future.

Stronger People
No matter what happens in the future, Nathel says the continued success of Nathel & Nathel will come down to the one thing its competitors can’t duplicate – its people. The company’s staff has direct input into its direction, all the way down to choosing the equipment the company buys for them to get their jobs done every day. By keeping its employees engaged and invested in the company’s success, he says, Nathel & Nathel does right by its customers each and every time.

“If you asked me what’s the most important thing for this company, it’s the staff, because we’re only as good as the people who work here,” Nathel says.