When people dine at one of Oggi’s Sports|Brewhouse|Pizza locations, they can be certain that their pizza will be served up with fresh ingredients. This philosophy is reflected in the company’s name, owner and Vice President Estella Ferrera says.

“’Oggi’ means ‘today’ in Italian,” she explains, adding that the company had a contest in 2003 where its fans got to choose its name. “We said, ‘That’s a great name, since we make most of our stuff from scratch.’”

Based in San Clemente, Calif., Oggi’s has 15 locations that sell pizza, beer, pasta and calzones, flatbreads, soups and salads. Ferrera’s father and uncle, George and John Hadjis, started the company 25 years ago.

Previously, the brothers had worked in the corporate world. George Hadjis’ MBA thesis at Pepperdine University was to find a viable business.

“He didn’t want to go back to corporate America with his MBA,” she explains, noting that he looked at various businesses before settling on pizza. Hadjis saw a hole in the industry he could fill. 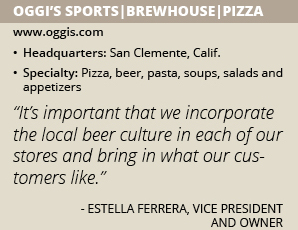 At the time, Ferrera explains, the market was divided. Pizza Hut, Papa John’s Pizza and Domino’s Pizza delivered pizza at a low cost, while restaurants such as California Pizza Kitchen sold gourmet pizza.

Hadjis decided to sell gourmet-style pizza in a casual-dining restaurant that he operated for another company. However, “They had given us the ability to evolve the menu as we saw fit,” Ferrera recalls. “We also decided to add a bunch of TVs throughout the whole restaurant and became a sports-themed restaurant.”

Brewing Up Business
In 1995, the Hadjis brothers were inspired to brew their own beer when they saw the microbrew trend take off. After gutting the center of their restaurant, they airlifted a microbrewery into the location in Del Mar, San Diego.

The hard work paid off for the Hadjis family, who began winning awards for their beers in 1998. “We thought, ‘Oh my gosh, we’ve really got something here,’” Ferrera recalls, noting that her family decided to separate from the original franchisor and began franchising the Oggi’s concept.

Over the years, the company has been a repeat winner at the World Beer Cup, and branded itself with local sports teams. “We became the official pizza of both the San Diego Chargers and Padres,” Ferrera says.

Oggi’s managed concession stands at both teams’ stadiums. “It really put a mark on us,” she says, noting that the company now is in a partnership with the Los Angeles Angels of Anaheim.

It also enabled Oggi’s to form a longtime partnership with LaDainian Tomlinson, a former running back for the Chargers. “He’s still our corporate spokesperson,” Ferrera says.

She notes Oggi’s beer products also have won over 50 medals in regional and international competitions. “We make excellent beer,” she says.

The crowning achievement for the company, she notes, was when Oggi’s was named the Champion Small Brewing Company at the 2004 World Beer Cup. This made Oggi’s “one of the best beer companies in the world,” she says.

Evolving the Business
Oggi’s recently celebrated its 25th anniversary, but the company is not resting on its laurels. Instead, it is focused on constantly reinventing itself. “We need to constantly evolve,” Ferrera says. ”If we don’t, we’re going to get gobbled up by competition.”

Recently, Oggi’s updated its locations with hardwood floors, butcher-block tables and a U-shaped bar. “Every bar now has a fabricated silo even though we’re not making the beer in the silo,” she says, noting that the bars sell 10 proprietary Oggi’s beers and 20 guest beers.

“It’s important that we incorporate the local culture in each of our stores and bring in what our customers like, even though that means we sell less Oggi’s beer,” she states. “We want our franchisees to sell more beer, and we think it’s what’s best for the concept.”

The company also changed the name of its main locations. After performing a market research study, Oggi’s found that its customers most valued the pizza, sports and beer elements of its concept.

Today, its main locations operate with the name Oggi’s Sports|Brewhouse|Pizza. “It’s very easy in this business to want to try to be everything to everyone, but you can’t,” she admits. “If you try and do specific things, that’s how you’re successful.”

Oggi’s also has launched its new Oggi’s Pizza Express concept. With locations in Orange, Calif., and at San Diego State University, it narrows the Oggi’s menu down to pizza, salad, wings and beer.

“It has less of a sports focus and more of a food focus,” she says, adding that its pizza is made with all natural, antibiotic free meats. “It takes the whole Oggi’s concept, shrinks it down and makes it more simple.”

Looking Good
It is wise to invest in an Oggi’s franchise, Ferrera says. “It’s a very fun business to run,” she says, noting that it matches up with the interests of many of its franchisees. “Some say, ‘This is what I love to do: I love to eat pizza, drink beer and watch sports.’”

The company also provides its franchisees with direct access to Ferrera. Currently, she is working with her San Diego franchisees to determine where marketing funds should go now that the Chargers have made the move to Los Angeles. “We’ll have a meeting in March,” she says.

The future looks good for Oggi’s, Ferrera says. The company plans to open a location in Mission Viejo, Calif., as well as other states, including Hawaii. “We’re also looking to expand the Oggi’s Pizza Express brand,” she says. “We see a lot of opportunity for that in the future, with good and experienced franchisees.”

Giving Back
Oggi’s contributes to Tomlinson’s Touching Lives Foundation, which focuses on helping families by promoting education, social and cultural awareness, and self-esteem. “We want to give back as much as we can,” Ferrera says.

“We’re able to touch so many people,” she says, noting that the company hosts beer-pairing dinners with Tomlinson. The proceeds have gone to Touching Lives, the Children’s Hospital of Orange County and the Angelman Syndrome Foundation, which is an organization close to Oggi’s heart.

One of Oggi’s first regular customers, Ferrera explains, had a daughter with Angelman syndrome. “We would save a table for them and we became just good friends,” she recalls. “They started putting on fundraisers for Angelman syndrome once their daughter was diagnosed.”