P.J.W. Restaurant Group continues to expand its core concepts while striving for relevance in an ever-changing industry.

Throughout high school in the 1960s and 1970s, Platzer worked for some of the famous, upscale South Jersey area restaurants as a busboy, cook and carhop. He tried several other jobs after high school, but soon followed his passion back to the restaurant business and has stayed ever since. 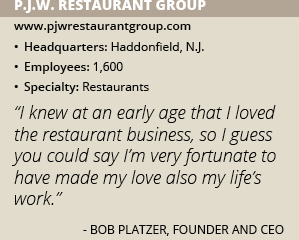 Platzer was running a kitchen in upstate Pennsylvania when on one of his trips home was given an opportunity for a job in the soon-to-open Atlantic City Casino industry. He landed at the first casino to open, Resorts International Hotel & Casino. Platzer remembers he was assigned to the Capriccio Italian Restaurant, “this is where I really believe my career took hold.”

During this time, Platzer answered an ad to lease a kitchen at the iconic Greenhouse bar on the beach in Margate, the next town over from Atlantic City. While longtime owner Chick Teaman kept the bar receipts, Platzer, thru his lease, kept all of the food receipts. It was a homerun. “I thought someday Chick would sell it to me, but the following year he died and the family sold the property; but by now I knew I could do this,” Platzer says.

In 1983, Platzer and his new bride, Donna, purchased a huge four-story Victorian building in the Poconos with a one-room shot-and-beer bar on the ground floor for $72,000 and named it Platz’s. “My wife and I lived upstairs and slowly started to build the business,” he remembers. “Times were tough and we definitely struggled for a while, and during that time our two daughters were born. We were very busy for sure raising a family and building the business.”

Expansion began 10 years after opening Platz’s with the first P.J. Whelihan’s – named after Platzer’s grandfather – in Allentown, Pa. “This would be the start of our wings and beer concept,” Platzer notes.

The new concept developed quickly with a menu of beers, wings, burgers and salads to what has become the core of the P.J.W. Restaurant Group’s four concepts.

Leading the Way
Platzer, along with the help of his two nephews, Christopher Webb and Jake Karley III, continued to grow the restaurant group at a good pace. He knew it was time to add to the upper management to maintain and continue to expand.

Platzer hired COO Jim Fris to help get consistent visits to the locations, develop and improve purchasing power, and gain accountability at the general manager levels. Next up, right behind Fris, Platzer added CFO Bill Love who had been a high-level CFO for a publicly traded company and had just retired from after completing a successful sale of the company. Love developed strong banking relationships and good P&L templates for the general managers, in addition to bringing the whole financial team of the P.J.W. Restaurant Group up to a very professional organizational level.

Platzer and the newly formed team were now ready to move forward. Since the team was put together they have grown by 10 stores and over 50 million dollars in additional sales. The P.J.W. Restaurant Group has become a major player in the Greater Philadelphia area with strong ties to Philadelphia professional sports, great community relationships and philanthropy to various organizations.

“Truly, though, our secret sauce starts with our staff,” he continues. “We are very fortunate to have been able to develop a great culture with a team who believes in our mission ‘that we always try our best for our guest!’ As a company, we always want to treat our team members as well as we treat our guests. Following that is our consistency with service and food, innovations to keep them coming back and our investment in our physical plant by always upgrading and reinvesting. We all wake up every day and ask ‘How can we be better?’ Our work environment is always very fun and we enjoy being here, its tough to call this work some days.”

Platzer and his team have a plan to be at 35 locations by 2023 with continued growth in their core geographical market. “Like any true entrepreneur, the discussions always move towards ‘Where else can we grow?’” Platzer says. “There probably is a new geographical growth area in our future.”

“Getting back to the ‘Secret Sauce,’ we have been blessed to have created careers for our team members and we are always promoting from within to new leadership roles for those who want a career in the restaurant field,” Platzer says. “We also have had many members of our team work their way through college, then pass their job onto a brother, sister or friend as they go onto other careers. Some even have their children working for us now. And, we consider that a true testament to our culture. It’s all part of the secret sauce, baby!”

Next Generation
“The P.J.W. Restaurant Group will continue to offer opportunities to members of the organization who want to grow with us,” Platzer says. “My daughter, Jacqueline, is in the business, who, along with Chris and Jake, will be the future leaders of the company. We will continue to grow our management team to be there and be ready for our ever-expanding goals.”

Platzer’s personal goals as well as goals for the P.J.W. Restaurant Group are to stay focused, stay true to the core brands and create opportunities at all levels. “We want to be a leader in how we treat our team on all fronts, which includes respect to each and every team member, fair pay, sensitivity to all social issues and most importantly to be authentic in what we do,” Platzer says. “Walk the walk; don’t just talk the talk. ”