The spotlight is on Planet Hollywood International as it revitalizes its brand by serving up new menu items and celebrity appearances.

The glitz and glamour of Hollywood combined with the possibility of a celebrity sighting or two is the magic behind Planet Hollywood® International. For 26 years, Planet Hollywood has provided its guests with an inside look at the entertainment industry while serving up an unforgettable dining experience. 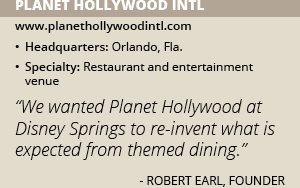 Along with the new look of the exterior of the restaurant, the new Planet Hollywood at Disney Springs has a fantastic menu with new, exceptional presentations. Outdoor seating on a terrace offers breathtaking views of the Springs and a new terrace bar called Stargazers features Florida craft beers and handmade cocktails with live music nightly. Planet Hollywood at Disney Springs features a new burger and sandwich menu created by celebrity chef Guy Fieri.

At its centerpiece is an expansive video projection wall that showcases imaginative content along with popular music videos. The $5 million high-tech entertainment system features programming that is unique, exciting and is an integral part of the dining experience at Planet Hollywood.

In the Kitchen
Last summer, Earl partnered with Fieri to create burger and sandwiches for Planet Hollywood at Disney Springs’ menu. Earl who is also the star of the Cooking Channel’s “Robert Earl’s Be My Guest,” wanted to work with Fieri because of their shared passion for food.

“Guy Fieri has created an impressive culinary empire and has built an incredible TV following with several food-themed shows, so it was a no-brainer to invite him to create a special menu for Planet Hollywood at Disney Springs,” Earl says. “This partnership only furthers our commitment to refresh our guest experience while continuing to offer freshly-prepared, pleasing dishes.”

“Donkey Sauce” is just one of many “Guy-isms” patrons will see throughout the menu and consists of mayo, roasted garlic, mustard, worcestershire and salt and pepper. Another one used throughout the menu is “SMC,” which stands for super melty cheese.

Planet Hollywood original and favorite menu items include the L.A. Lasagna, BBQ Ribs and its World Famous Chicken Crunch – all-natural chicken tenders hand-breaded with a crunchy sweet coating and served with Planet Hollywood’s signature creole mustard sauce. “We could never take chicken crunch off the menu,” said Earl. “We tried it once and our guests were very vocal about wanting it back!”

Experience the Magic
Planet Hollywood at Disney Springs overlooks the heart of Disney Springs – the dining, retail and entertainment district at Walt Disney World Resort. The yearlong and multimillion-dollar project transformed the iconic globe into a four-story stargazing observatory with new spaces and a menu that brings new excitement to the brand.

The 36,000-square-foot restaurant allows guests to “Dine Amongst the Stars” with an immersive theatrical dining experience. Elkus Manfredi Architects designed the observatory so that each floor features a different experience. Walls and glass displays throughout the restaurant are adorned with imagery as well as a collection of memorabilia focused on filmmaking and Planet Hollywood Orlando’s commitment to Hollywood.

Planet Hollywood at Disney Springs features 3-D interiors that come to life through trompe l’oeil 3-D technology, an art technique that uses realistic imagery to create an optical illusion that objects exist in the space rather than on the screen. “We wanted Planet Hollywood at Disney Springs to re-invent what is expected from themed dining,” Earl says. “What we’ve created here is a standalone destination that evokes the feeling of early 20th century Florida and fits into the greater story of Disney Springs. Once you arrive inside you are immediately immersed in cutting edge entertainment technology from the way our memorabilia is displayed to our unsurpassed video programming.”

Planet Hollywood plans on continuing to provide guests nationwide an opportunity to have a front row seat to the entertainment industry.