Christina Bauer-Plank discusses how we can reduce food waste in the home, and reveals the results of a study that encouraged changing food behaviors

Food waste is an environmental and humanitarian crisis contributing to climate change by creating eight to ten percent of global greenhouse gas emissions annually. A third of all food produced worldwide is lost or wasted between its source and our plates, creating $940 billion worth of economic losses, with a knock-on effect on food insecurity, our already fragile ecosystems, and biodiversity loss.

Of the food wasted, over 60 percent is generated in people’s homes, making domestic food waste the biggest contributor in the entire food chain. People are not aware of the extent and impact of the food waste issue, particularly when it comes to the link to greenhouse gas and climate change. Moreover, at home we often do not think of ourselves as major contributors to the problem. We believe food waste happens somewhere else in the chain – in industry, in agriculture, in restaurants, but not in our own households.

At Hellmann’s, it is our deeply held belief that food is too good to be wasted. We have a goal to inspire and enable 100 million consumers every year through 2025 to be more resourceful with their food at home, so they waste less. By doing so, we will achieve the powerful return of making a true, lasting difference in the lives of people and our planet, beyond just our 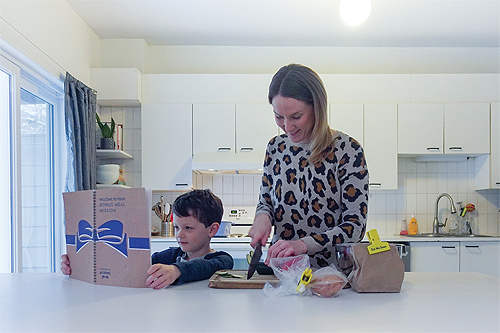 products, enabling our brand to have even further meaning for our consumers.

We are committed to providing people with the motivation, inspiration and practical solutions to be better food managers. Helping people to see the possibilities they already have in their fridge and stop so much food being thrown away. No one ever plans to throw good food in the bin. Wasting food is not a behavior but is the outcome of a complex chain of everyday behaviors – from meal planning, shopping, storing, preparing, consuming food – which lead to food waste as an unintended outcome.

We have recognized people need support to positively change their food behaviors at home. Therefore, Hellmann’s partnered with leading academics and experts in the field to understand and address the issue of household food waste. At the end of 2020, we conducted a study in Canada, one of the biggest offenders of food waste globally, with nearly 1,000 families over five weeks, making it one of the largest and longest studies of its kind.

The study asked participants to commit to one ‘Use-Up Day’ per week, where they would create at least one meal with food they already had in their home. As support, participants were introduced to the ‘3+1 Approach’ generated by Hellmann’s for the study: a simple and easy mental shortcut for how to make a meal with what they could easily grab from their fridges and around their kitchen and use.

With the 3+1 Approach, participants brought together ingredients from three categories: a base (e.g., bread, rice, pasta), vegetable or fruit, optional protein, plus a ‘magic touch’ in the form of spices or sauce to bring the dish together and give it flavor. Additionally, participants were given inspiration in the form of flexible recipes – which followed the 3+1 Approach, and provided them with ideas for using up commonly wasted ingredients (e.g., bread, tomatoes, apples, potatoes).

The study found that by using the tools and methods provided, participants reduced their reported food waste by a third. The Use-Up Days – supported by the 3+1 Approach and flexible recipes – helped participants to think differently and flexibly about the food they had, enabling them to see potential in disparate ingredients. Three quarters (74 percent) of participants said they considered using up their food to be ‘easy’ by following these methods.

Most notably, eight weeks after the study had concluded, eight in ten participants continued to create a ‘Use-Up Meal’. Seven in ten felt more inspired to use up ingredients they had, seeing new meal possibilities. Additionally, nine in ten (89 percent) said they are likely to continue to create additional meals on ‘Use-Up Day’.

We know that this approach can drive positive change at scale. Looking at our data, if all households with children across Canada adopted this approach, the amount of food waste saved would be an estimated 250m kg. We are now in the process of validating a scalable digital version of the program that will be rolled out nationally in Canada later this year and then across the world.

We know from our previous internal research that 70 percent of people agree ‘avoiding food waste’ is important to them, and the majority say they do not want to waste food. By giving consumers the tools and motivation to be more resourceful with the food they already have in their homes, it is possible to shift the way people look at the contents of their fridge and reduce the amount that is thrown away. And if we, as an industry, look at the ways we can utilize our platforms to connect with consumers to ‘buy better, store better, use better’ then we can contribute to creating a more sustainable world by helping people to consume more responsibly and waste less food.

Unilever
Christina Bauer-Plank is Global Brand Vice President Hellmann’s, Unilever. For more than a century Hellmann’s has been helping people turn the simplest ingredients into tasty meals with its mayonnaise and sauces. Transforming ingredients into delicious dishes – which ensures they are enjoyed and eaten – is part of its heritage. It is also the driving force behind its ambition to help families become more resourceful with their food, so that they waste less.
For further information, please visit: https://www.hellmanns.com/us/en/home.html

Queensgate Investments has successfully completed a refinancing of two of its Generator Group lifestyle hotels in...

The Collective is kick-starting the New Year with the relaunch of its dairy-free yog pots, introducing...

The Hospitality Professionals Association (HOSPA) has launched a campaign to highlight and celebrate the wealth of...