Soulman’s Bar-B-Que enters the franchise market with its hickory-smoked meats.

They chow down roughly 600,000 pounds of beef brisket and 400,000 pounds of ribs on an annual basis. They take food as seriously as football and everyone knows it’s not a good idea to mess with them. They are Texans-based Soulman’s Bar-B-Que’s customers and their hunger for hickory-smoked meats has propelled the restaurant chain into the franchise market.

Soulman’s has enjoyed an increase in same-store sales during the last eight years, selling hundreds of thousands of pounds of product each year. Its 42-year-old brand is a popular destination for northern and central Texans who seek a departure from the “run of the mill” barbecue experience.

“People love us because they know they are getting fresh food,” says Randall McGee, the company’s COO and vice president of franchising. “It’s not frozen food that goes from freezer to fryer. It’s what we call exceptional Texas-style barbecue.” 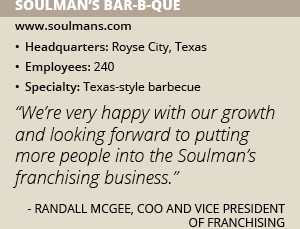 The eatery is famous for a variety of slow-cooked meats including beef brisket, chicken, ham, turkey, pulled pork, sausage, hot links and ribs. Its meats are cooked “low and slow” over hickory wood, with some being smoked anywhere from 12 to 14 hours.

Dedication to quality food and a strong focus on customer service have helped make Soulman’s 15 locations a success. The company raked in roughly $18 million in sales revenue last year.

“Unlike the restaurant industry as a whole, our sales have been climbing,” McGee says. “This will be year No. 9 for growth. We’re very happy with our growth and looking forward to putting more people into the Soulman’s franchising business.”

Passionate Prerequisite
Soulman’s opened its first franchise store in May 2016 in Lewisville, Texas, and plans for up to five more Texas-area locations by the end of 2017. The company doesn’t have immediate plans for operating franchises outside of Texas, but McGee says it’s open to the idea.

Barbecue enthusiasts who wish to open a Soulman’s franchise must have at least $250,000 in liquid assets and a net worth of $1 million. The company charges a franchisee fee of $25,000 per location and an ongoing royalty fee of 6 percent. It also collects 2 percent of sales per month for local store marketing.

Soulman’s provides its franchisees with both initial and ongoing training to make the process as smooth and uncomplicated as possible. The required training process is between six to eight weeks in one of the company’s restaurants. Training covers all operational procedures as well as marketing and leadership practices.

When it comes to choosing a building structure, franchisees have two options. They can either build new or acquire a second-generation structure. All restaurants are stand-alone structures that range in size from 2,800 to 3,500 square feet. “We’ll even help them with building design and site selection,” McGee says. “We’ll provide the plans and diagrams and the recommendations.”

Recipe for Success
To help launch its franchise campaign, Soulman’s introduced a variety of new design elements that will be incorporated into future openings. The exteriors of its locations are currently painted barn red with a white trim, and stacks of hickory wood are often stacked near the front doors. Windows feature vinyl stickers with flame designs notifying customers that the restaurant serves wood-fired barbecue. The wooden interior is designed to invoke a rustic decor atmosphere.

Soulman’s future franchises will keep many of these elements but with added features like LED lighting above dining tables and stained pine planks on the bottom of soffits. Booths will line the perimeter of the dining area.

Although atmosphere is paramount, the quality of food is the key to Soulman’s success. The company believes in raising the bar for barbecue. “Our menu is a unique blend of traditional family recipes and exceptional Texas style barbecue,” McGee says.

Besides smoked meat, the menu also features sides that include potato salad, coleslaw, ranch house beans and fresh cut French fries – all prepared on site with methods and recipes that haven’t changed since the first restaurant opened in 1974.

In addition, Soulman’s strongly believes in large portion sizes. In fact, it even coined the motto: “We’re not stingy with our meat.” The company believes that large portion sizes at a good value, along with quality food and great customer service, will keep its customers coming back for more. Its sales revenue appears to confirm that philosophy.