Skip to content
You are here:Home » Stars and Strikes
Insights
4 min read

Stars and Strikes specializes in creating great memories for its guests.

Taking care of families is No. 1 at Stars and Strikes, Director of Operations Kip Lowery says. If a child has a birthday party, “We’re making sure we’re creating great memories,” he says.

“A lot of people aren’t able to experience Disney and the great theme parks that are out there,” Lowery continues. “We bring [that fun] on a slightly smaller scale to families that is affordable. They can come and enjoy themselves.” 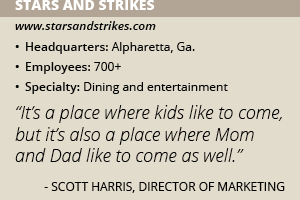 “They wanted a business that catered to the family, and they thought about bowling alleys,” Lowery explains. Typically, bowling alleys were known as smoky, adult environments, but Canouse and Albano made Stars and Strikes family friendly.

Today, Stars and Strikes has eight locations and is currently building its ninth in Columbus, Ga. “That’s scheduled to open up on June 1,” he says.

The locations also appeal to adults with features such as full-service bars, Director of Marketing Scott Harris adds. “It’s a place where kids like to come, but it’s also a place where Mom and Dad can let loose and have some fun,” he says.

The Next Level
Stars and Strikes sets itself apart with its food, Lowery says. “We’ve really taken it to the next level,” he says, noting that several of its items are made from scratch. “Our fried pickles are a big hit for us,” he says, noting that its chicken wings also have earned rave reviews. “Our wings have won some awards at the local food festivals.”

The restaurants also offer a variety of hamburgers, which they can top with a selection of premium toppings such as bacon or a fried egg. “It’s a lot like theme parks or arenas where people want those traditional foods,” he says. “We find the quality and put a little twist to them.”

Stars and Strikes also brought that approach to its salads. “I took the traditional Caesar salads and created the Julius Caesar Salad with some baby spinach [and] chopped basil in the middle of it,” he describes. “There’s not too much flair, but enough to make it unique in the signature.”

The locations also have added a gluten-free pizza. “We try to cater to the health conscious and have some options,” he says, noting that the company is developing a gluten-free menu.

Flavorful Beverages
Stars and Strikes’ adult beverage menu features an array of top brands. “We’ve also done some creative stuff,” Lowery adds. “Instead of having your traditional shot glasses, we have ‘Strikers.’”

These consist of half the amount of alcohol in a regular shot. “[People are] toasting with them while drinking responsibly,” he says.

The chain also has its handcrafted cocktails, mojitos with vodka and a new drink, the Mini Melts Martini, Lowery says. “It’s the only drink in the world that as the ice melts, it becomes [more] flavorful,” he says. “For children, we have flavored lemonade,” Lowery adds. “We also have ICEE machines located at our snack bars.”

Good Times
Stars and Strikes invests in its staff, which it considers to be its No. 1 asset, Lowery says. “[We try] to find the right people to work in our facilities and to manage them,” he says. “We want them to have fun while they work.”