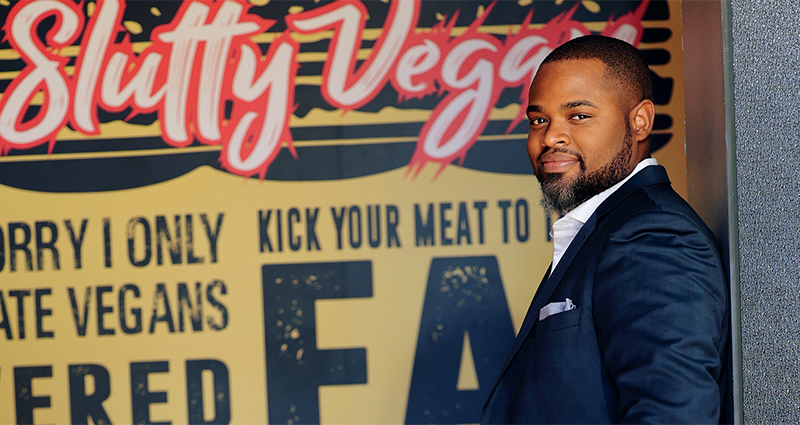 As Jason goes on to explain, the name – as Shakespeare once suggested – is an arbitrary label. The proof is in the proverbial pudding – or burger, for that matter. “In our book, being a slut is not about sex,” he notes. “It is not about being promiscuous or anything like that; rather, it is about choosing to indulge in things that are positive, feel-good, and good for you. If you have experienced our food, then you will realize that these big, sloppy burgers are about recognizing you can indulge in good food while still sticking to your plant-based philosophies and ideals. We were intent on building a vegan brand with some vibes; something very opposite from the typical grass and greenery. We built an experience that feels more like an amusement park than a vegan restaurant with food that’s fun to eat, flavour-filled, and 100 percent plant- based. That’s the Slutty Vegan way. 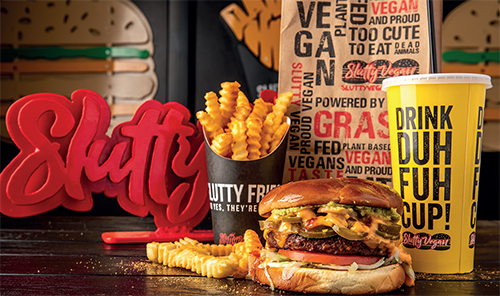 With its attention-grabbing name, engaging marketing, and innovative menu, the fast-food chain now has six different restaurants across Georgia and Alabama. It has also recently opened a landmark store in Brooklyn, New York, and a further location in Columbus, Georgia.

Indulgent alternatives
No meat? No problem. Partnering with Impossible, a frontrunner in the meat-free alternatives market, the chain offers over a dozen different burger and hot dog options. For example, the Ménage á Trois is a plant-based patty loaded with vegan bacon, shrimp, and cheese, plus caramelized onions, lettuce, tomato, and a healthy serving of the brand’s signature Slut Sauce – all topped with a vegan Hawaiian bun. Other options include the Big Dawg, a plant-based bratwurst with toppings of sauerkraut and sauce in a pretzel bun; and the innovative PLT: several sweet jerk plantains complemented with lettuce, tomato, and Slut Sauce. All of which come with golden crunchy-fluffy fries.

“We try and make an ordinary burger have some life and become more vibrant,” Jason reveals. “A big part of that is our secret sauce and seasoning: Slut Sauce and Slut Dust. Together, they bring everything up to a whole new level. Additionally, we serve food like vegan banana pudding, coleslaw, and sweet potato pie. It all tastes incredible and people recognize that, though they are vegan, they can still indulge in the nostalgia of traditional foods because we are offering a meat- and dairy-free alternative.

“Everything we do leads with taste,” he goes on. “If it does not taste good, then it will not reach the menu – let alone our customers. We operate between two pillars: food that tastes great because it is cooked with love and seasoned well; and a unique experience that makes our customers want to come again and again. People walk in our doors and they are instantly met with energy, love, and a plate of food that will turn a bad day into a good one. That is what really brings people back. We also cater to a variety of customers: we launched a non-soy burger and gluten-free option for those with intolerances, and we continue to push limited-time offers to keep things fresh and exciting.” 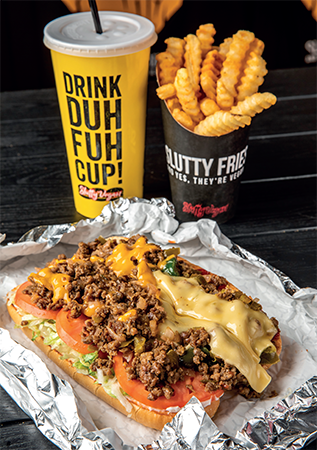 As Jason explains: “The plant-based market in Atlanta is very vibrant. There are tons of entrepreneurs and restaurateurs that have opened successful vegan and vegetarian places in the city. One of the reasons we chose our initial opening site was because it is in the heart of the west end in downtown Atlanta, which is home to some of the city’s most popular vegan places. We wanted to build on top of that, adding more options for the plant-based community by freshly mixing the old with the new.

“Undoubtedly, the vegan market is growing, and we consider ourselves a leader in that space,” he asserts. “We recently launched a retail division in partnership with Costco to bring our brand from the streets into the family home, bringing us closer to being a household name. The range is doing really well, and includes Pinky’s special dips: spinach and artichoke, hotlanta cheese, and buffalo cheese. We have just launched the range in about 250 Target stores across the South and New York. This is just the start; in the future, we envisage ourselves as a brand that can bring a host of high-quality vegan products like bacon and our signature Slut Dust to grocery stores nationwide.”

“In the next few years, we are also excited to see the rise of Bar Vegan, our upscale cocktail lounge, which will be popping up in additional cities across the country,” he concludes. “Another brand of ours, Dinkies, is leading the way with its vegan cheese steaks and tater tots, and consumers can expect to see more of that name in a range of settings like commercial airports. But we are also keen to continue building ourselves as a lifestyle brand outside of the food space; recent collaborations with Steve Madden and The Lip Bar attest to that. Put simply, you will be seeing, hearing, and tasting a lot more from us in the future!”