Tom+Chee looks at alternative venues to expand its franchise while partnering with Frito-Lay to add new menu items.

Tom+Chee began as a dream of two Ohio couples who persisted through all the ups and downs of starting a business until they achieved their version of the American Dream. The rapidly expanding franchise company has come a long way over the past eight years, getting its start in a small tent at Fountain Square in Cincinnati. Today, it has 27 locations throughout the country.

“Me and my wife, Jenny Rachford, Trew Quackenbush and his wife, Jenn Quackenbush, were all hanging out in 2009 and talking about restaurants being the hot new thing,” co-founder Corey Ward remembers. “We talked about the Food Network and Travel Channel shows and the different food trends taking off. We wanted to do something [Trew has a background as an executive chef], but we didn’t have any money.” 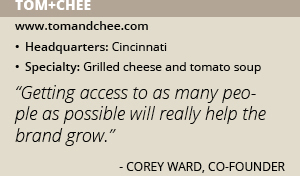 The couples pitched the City of Cincinnati to set up a booth downtown at Fountain Square, but were denied their first few requests because there was a vendor waitlist. In fall 2009, the city contacted Ward and said one of its vendors at Fountain Square for December backed out and it was theirs if they wanted it. “They told us no one has ever made money in the winter and this is more about marketing,” Ward recalls. “We emptied our bank accounts, got a tent, griddle and food permit, and started selling grilled cheese. We started on Dec. 1 and paid our rent on time by Dec. 5.”

On Jan. 1, 2010, Tom+Chee got its first media exposure, which only snowballed after that. The company was also invited back to Fountain Square that summer. While reworking their working their schedules to run the tent six days a week and late night on Fridays, Ward, Rachford and the Quackenbushs were still trying to find a permanent location for Tom+Chee.

A couple blocks north of the square, the couples found an older building that had been closed for a year or two and opened their first restaurant on Court Street for a few thousand dollars. “We opened 363 days from when we served the first grilled cheese out of the tent,” Ward says.

Its second restaurant is located in the Newport on the Levee shopping center in Newport, Ky., just a few minutes from downtown Cincinnati. That opened in 2011 and a couple months later, Travel Channel’s “Man v. Food” came and filmed. “We got a huge response from that,” Ward remembers. “We aired on a Wednesday and we thought we would be really busy that weekend. On Thursday morning, there was a line of people waiting.”

After “Man v. Food” aired, Tom+Chee’s Grilled Cheese Donut appeared on two episodes of Travel Channel’s “Amazing Eats” and “Chowdown Countdown,” and was named the Today Show’s “Best New Sandwich in America.” Fame hit Tom+Chee even more when the founders appeared on ABC’s “Shark Tank” and struck a deal with Barbara Corcoran and Mark Cuban. Cuban later bowed out after not liking the franchise model that was already in place. Tom+Chee is still partners with Corcoran.

Fame and Franchising
Before appearing on Shark Tank, Tom+Chee had two franchise locations in Louisville, Ky., and two more in the works. Once the show aired, the founders were inundated with franchise requests. “That Monday morning we had 2,700 franchise requests and they continued to come in from all 50 states, Canada, Mexico, Ireland, the Philippines, Czech Republic and other countries,” Ward says. “We ended up with about 35,000 franchisee requests.”

Today, Tom+Chee has 27 locations. Ward admits the founders had a lot to learn about who makes the best franchisee for its company, so it has parted ways with a few of its franchisees. “Ideally, we are looking for someone who has the wherewithal to execute on an agreement, someone with experience running a restaurant and we have had a lot of success with people who have run other franchises,” Ward says.

At its peak, Tom+Chee had 37 locations but now feels confident with the franchisees it has onboard. Out of its now 27 restaurants, the founders still only operate their first two locations – Court Street and Newport on the Levee.

When a new franchisee comes onboard, Tom+Chee approves site selection by partnering with CBRE real estate firm and oversees construction. Once the location is built, the franchisee and a manager or the general manager and a store manager come to Cincinnati for 21 days of training. “They work at both of our locations, which are night and day compared to the traffic they get, to get to experience both of those,” Ward says. “After 21 days they go back to their store and start hiring their crew.”

The general manager or franchisee will begin training their crew for the first few days until a corporate trainer arrives for the remainder of the training. “We have the owner or general manager start the initial training to set the tone and structure in the store and then our crew comes in and facilitates the rest of the training,” Ward explains. “We have had some stores get insane openings. One of our trainers had to stay at a new location in Texas for a month-and-a-half because the store was that busy. He made sure everyone was up to speed before leaving and this process has been working well for us for the past year-and-a-half.”

New Ventures
Tom+Chee will start rolling out new menu items as it recently partnered with Frito-Lay to feature its products in its grilled cheese sandwiches. “We launched a Flamin’ Hot Cheetos Grilled Cheese sandwich at the end of March, which makes for a bright, bright orange grilled cheese,” Ward says. “Don’t be surprised if you see a Cap’n Crunch Grilled Cheese Donut in the future and something with Doritos.”

Tom+Chee is also exploring new venue options for its restaurants, including King’s Island amusement and waterpark near Cincinnati. “It’s new for us,” Ward says. “We tested it this fall during the park’s Halloween Haunt for four weekends in October and we exceeded our expectations by about 50 percent. We went back to our roots there with a booth and it was fun.”

Although the company had to increase it’s price at King’s Island, the response was positive and Tom+Chee will be back full-time this summer. The company will feature four sandwiches, including its Grilled Cheese Donut.

Moving forward, Tom+Chee hope to partner with more alternative venues, such as aquariums, movie theaters, food courts, baseball parks and airports. “We are trying to focus more on locations that get a lot of foot traffic instead of being in a random strip mall somewhere in the suburbs,” Ward explains. “The downtown area is our niche as people come down looking for cool things to do. Getting access to as many people as possible will really help the brand grow. It’s just about getting the word out about who we are and going from there.”