Back to Profile Gallery > 99 Ranch Market 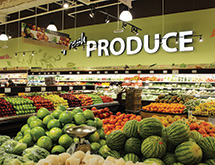 When Roger Chen arrived in the United States from Taiwan in the early 1980s, he quickly noticed that there were no food stores that catered to the growing Taiwanese population in southern California. “My father saw a need,” says Jonson Chen, the COO of 99 Ranch Market, which today has more than 40 locations in four states.

“We immigrated from Taiwan in 1982,” Chen recalls. Two years later, his father opened the first 99 Ranch Market – a storefront location in what is now known as Little Saigon, a Vietnamese community located in Westminster, Calif. The company grew steadily, opening additional locations throughout southern California and later expanding into the northern part of the state, where it now has 17 stores. 99 Ranch Market opened its 42nd store in November. 99 Ranch Market gets its name from the phonetic sound of saying “nine” twice in Chinese, which sounds the same as saying “everlasting.”

Slow, Steady Growth
The majority of 99 Ranch Markets are located throughout California, but the company has expanded into Las Vegas, Seattle, Houston and Dallas. “We continue to grow the concept,” Chen says. That concept calls for a full-size grocery store that features Asian products but also carries a variety of non-Asian foods. In fact, in some locations, nearly half of 99 Ranch Market’s customers are non-Asians, he says. “Non-Asians know Asian food,” he says. Chen’s father understood the importance of appealing to non-Asian customers when he decided against giving the stores an Asian name, Chen says.

The Buena Park, Calif.-based company’s steady growth did not occur overnight. Rather, new stores were given time to flourish before expansion plans were considered. The company typically opens three or four stores each year. “It took time,” Chen notes. “We grew organically store by store. Today we are a full-size, full-blown operation.” Typically, 99 Ranch Market will open a new store in a location previously occupied by another grocery or retail store.

99 Ranch Market has been well received by the Asian community, which was seeking a store that carried a large selection of the products they are accustomed to.

“We’ve become a brand and store that the Asian community sought out,” Chen says. The chain sells a wide range of imported foods from Hong Kong, Japan, China, Taiwan, Korea, Vietnam and Thailand, he says. The company maintains production facilities in China. Each store features a full-sized bakery, which is growing in popularity. “The focus is on specialty cakes,” Chen says.

Word-of-mouth is 99 Ranch Market’s key marketing vehicle, but the store also relies on ads in Asian newspapers and the use of social media platforms, such as Facebook and Twitter. 99 Ranch Market also has a website that features blog postings, recipes, customer contests and an online shopping feature. The company recently reached a deal with Amazon Prime Now to provide delivery to customers.

Expansion Ahead
99 Ranch Market is considering additional expansion, which could take the store to other regions of the country, such as the East Coast. “We’ve been looking,” Chen says. The expansion into Texas occurred seven years ago and taught the company a lot about moving away from its base in California. A significant number of employees were transferred to the Texas stores and relied on to continue the store’s strong customer service and business practices, he says.

“It was a learning process for us,” Chen says. “It was definitely different. But we’ve done it. We’ve done it well; we’ve done it right.” Expansion is not easy, he adds. Choosing the right location for a new store is not a simple task. “There is a lot of study of demographics,” he explains. 99 Ranch Market looks for middle- and upper-class suburbs that have a sizeable Asian population, he says.

Chen is especially proud of the way he and his family have continued his father’s business. More importantly, however, he appreciates the friendly, customer-centric environment that exists in the stores. “People know about that,” he says.