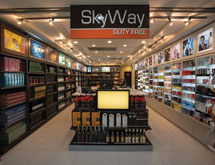 There are some companies that choose to operate in a single industry, but A.S. Bry¬den & Sons (Trin-idad) Ltd. has flourished by op¬erating in a diverse range of industries, Managing Director David Franco says. The distributor, popularly referred to as Brydens, is based in San Juan, Trinidad.

Founder Arthur Sidney Bryden started the company in Barbados in 1898. Twenty-five years later, Bryden’s son, William Francis Bryden, opened the firm’s Trinidad office, which has become one of the most successful businesses of its kind in the country.

The company’s Spirits & Wines division is by far the leading importer of these products in the market and has secured partnerships with world leaders in the industry including Diageo, Moet Hennessy and Red Bull, just to name a few. Its portfolio, which is the envy of its competitors, includes such power brands as Johnnie Walker Black Label, Baileys, Smirnoff, Moet & Chandon, Hennessy, Concha y Toro, Robert Mondavi, Red Bull Energy Drink, Perrier and many more.

The Food & Grocery Division has seen explosive growth over the last decade and represents the likes of global giant Kraft Foods. Recently, Kraft Foods acquired Cadbury Adams, and fortunately for the company, it chose Brydens as its preferred partner when it decided to consolidate its business in Trinidad. Other global suppliers include the Danone Group, Reynolds and Colcafe.

Some of its famous brands include Oreo, Trident, Jell-O, Dannon and Maxwell House. The division is also especially proud of its private label brand Eve, which has an extensive portfolio, including pasta, soya oil, canned vegetables and meats, tea and milk. The company says it has plans to develop this range further in the future.

The Hardware & Housewares division at Brydens has recently undergone a transformation, and with an upweighted Management structure, it is now poised for growth. Some of its globally recognized hardware suppliers include Cobra Watertech, Stanley Black & Decker Group, Apex and Truper. Brydens’ House¬wares suppliers include leading companies such as Newell Rubbermaid and Sunbeam International.

The line-up of brands which enjoy world¬wide recognition include Cobra, Black & Decker, De Walt, Kwikset, Stanley, Truper, Bemis and Nicholson and Rubbermaid, Sunbeam, Lasko, Oster and Brita on the housewares side, to name a few.

Over the years, Brydens has developed its distribution penetration and now services multiple channels, including hotels, cafes, restaurants, supermarkets, and hard¬ware and plumbing stores. “We even sell to pharmacies and small mom-and-pop shops,” Franco says.

Brydens provided the fuel for growth for the establishment of what is now a small conglomerate. The parent company, AS Bryden & Sons Holdings Ltd., now also owns two other subsidiaries in addition to Brydens, namely FT Farfan Ltd. and Bryden Pi Ltd.

FT Farfan Ltd. is a leading industrial supply company catering to key sectors in the oil and gas, construction, industrial and agricultural sectors. In addition to sales and rentals, the company currently operates retail outlets in San Juan, Arima, San Fernando, Galeota and in the sister island of Tobago.

Brydens represents some of the world’s most powerful companies in the field including Stihl, JCB, Shell Lubricants, Cummins and Lincoln Electric. The service departments at FT Farfan employs over 70 people and its technicians are all certified by its re¬spective suppliers.

The other group subsidiary, Bryden Pi Ltd., imports and distributes pharmaceuticals, hospital supplies, and personal care and consumer products. Its Health care suppliers include such global leaders as GlaxoSmithKline, Janssen Cilag, Roche Sanofi, Baxter, Kodak and Covidien. In the personal care and consumer arena, it represents KimberlyClark, Mead Johnson, Lasco and Loreal. The company recently acquired its own brand, PROTOX, a regional leader in insecticides.

A Top Team
Franco praises Brydens staff, which has shown it can work together as a team in a time of crisis. In August 2005, he explains, the company lost its warehouse in a fire. Despite the harsh conditions, “The staff really kept this place together,” he recalls.

As the company waited for new facilities to be built, it secured its products in temporary storage sheds on its compound. In addition, the firm utilized a warehouse located near the Piarco International Airport.

“The Trinidad and Tobago Customs and Excise Division was extremely supportive during our time of need,” Franco recalls, adding that it took two years to demolish the wreckage of the old warehouse and build a new one from the floor up.

Although the conditions made its staff weary, each member held it together and remained focused on their jobs, Franco asserts. “It was really impressive,” he states. “It will stay with me forever.”

He adds that the environment at Brydens also has nurtured loyalty among its employees. “Bryden affords us an opportunity to be autonomous,” he says.

For instance, when Franco oversaw its wine and spirits operations, “I [felt like] I had my own company,” he says. “The leadership allows you the freedom to fly.”

Brydens fosters a family atmosphere. “It’s a company where we treat people like they’re family,” he says.

“[We] try to retain a very open door-type policy here,” Franco continues. “It’s been challenging to maintain this environment as the company has grown over the years, but the leadership team strives to maintain the atmosphere as best they can.”

The company also strives to maintain a humble attitude. “Humility is important to us and we’re grateful for our customers’ business,” Franco says. “We try to keep our feet on the ground. I think that’s extremely important.”