Back to Profile Gallery > A. Stein Meat Products 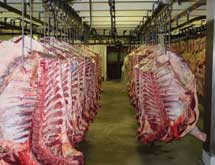 Stein Meat Products prides itself on providing high-quality carcass beef, boxed beef, lamb, veal, pork and poultry to many of the New York area’s finest restaurants. The family owned distributor has served the area for more than 75 years.

Brooklyn-based A. Stein delivers its quality products throughout the New York Tri-State Area, with a large concentration on high-end, white tablecloth restaurants such as Peter Luger Steakhouse, New York’s top-rated steakhouse. Other customers include gourmet butcher shops as well as independent retailers.

Prime rib, ribeye, porterhouse, New York Strip and other cuts are sliced to order in the company’s plant and distribution facility in Brooklyn. “We’re one of the only fully diversified wholesalers in the New York City area,” says Howard Mora, who co-owns the company with partner Alan Buxbaum.

“A restaurant or retailer can come here and basically buy everything they need; we have a full line of products,” he adds.

The company also has the capability to provide portion-controlled products such as 40-ounce porterhouse steaks or 16-ounce boneless shell steaks.

“We’re one-stop shopping, which makes it easier for customers; they don’t have to order from five different distributors [for products],” Mora says.

Recent years have seen many of A. Stein Meat’s customers seek out more fresh meat products after years of boxed meat dominating the industry. While the company serves both segments, it is more actively promoting fresh meat to its customers, Mora says.

“We receive deliveries every day, so we always have fresh products on hand,” he adds. “We’re reliable in terms of service and supply to our customers.”

Freshness and service are ensured in part by both Mora and Buxbaum, who take active roles in the company. “We’re a total hands-on company; my partner and I review every item that goes out of our plant and pride ourselves on being a full-service wholesaler to our customers,” Mora says.

In addition to its wholesale and distribution business, A. Stein Meat is entering a new market with the recent introduction of the Brooklyn Burger.

The idea came to Mora and Buxbaum five years ago, when they thought of creating a hamburger with a steakhouse taste. With an excess of round and chuck ends of beef in stock, the pair devised a burger recipe containing only full muscle meat beef with no additives or trimmings, Mora says. The burger is sold in various sizes from two-ounce sliders to a 10-ounce steakhouse burger.

The formal launch of the burger came four years ago when it was introduced at MCU Park in Brooklyn, home of the Brooklyn Cyclones, the minor league affiliate of the New York Mets. “A lot of burger manufacturers try to get into the retail market first to develop their brand, but we decided to take a different course and introduce the Brooklyn Burger into sports venues,” Mora says.

The burger is now available frozen at retail outlets. The Brooklyn Burger is also available at New York and New Jersey sports venues which include Yankee Stadium and Citi Field, the home of Major League Baseball’s New York Mets; and the Nassau Coliseum, home of the New York Islanders of the National Hockey League. The company also recently signed agreements with the New Meadowlands Stadium to be the official burger of the National Football League’s New York Giants and New York Jets. The burger is also served to the National Basketball Association’s New Jersey Nets at their current location and will be their official burger after they complete a move to Brooklyn in 2012.

“We felt our exposure would be greater in sports venues, with the number of fans going to games and trying the burger,” Mora says. “We knew we had a great-tasting burger and knew it would create an avenue into retail outlets.”

The burger has been further boosted through New York City radio stations and promotions such as Brooklyn Burger eating contests at MCU Park and Citi Field. The most recent contest at Citi Field in July drew 25 participants and 500 spectators before a Mets game. The contest winner ate 18 burgers in four minutes.

Mora says he hopes to get the burger into retail outlets outside of the Tri-State area while continuing to supply white tablecloth restaurants and other customers.

Part of the Community

In addition to providing and selling meat, A. Stein Meat Products believes strongly in keeping a high profile in its community, and participates in a number of activities in Brooklyn.

Community activities include donating burgers to the New York City Fire and Police Departments for the annual Stamp Out Crime night and annual charity fire/police baseball game. A. Stein also sponsors the annual Tell Every Amazing Lady About Ovarian Cancer Walk in Brooklyn.