Back to Profile Gallery > Abuelo’s 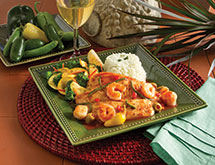 Now celebrating its 25th anniversary, Abuelo’s has worked to be an innovative force in the evolution and growth of Mexican cuisine. Founded in 1989 and a subsidiary of Food Concepts International, the company has combined menu diversity, food quality, affordability, customer service and an authentic experience to become one of the top Mexican food chains in the United States.

“James Young, Chuck Anderson and I started this company in 1989, as James initially owned a chain of 11 fast-casual Chinese restaurants that started in 1974,” COO Dirk Rambo says. “We converted one into our first venture into Mexican food. James subsequently sold the Chinese restaurant group and we turned our focus over to Mexican cuisine.”

Cool and Casual
Abuelo’s footprint includes 40 locations in 15 states. Based in Lubbock, Texas, the company owns and operates all of its locations. “We currently have no franchises and have none planned,” Rambo says. “We believe that we are better able to control the results and evolve efficiently by being in complete control of our restaurants.”

The company has been operating its Mexican restaurants in spaces that range from 6,900 square feet to 10,000 square feet. It is currently working on a smaller model that allows the company to be located in smaller markets and the end caps of strip centers.

“Even though we have 40 restaurants, we have an unbelievable amount of opportunity for future growth,” Rambo says. “We can easily add approximately four stores per year, and we currently have three new units queued up for 2015.”

Rambo believes that Abuelo’s would be classified as a “casual-plus” chain, fitting into the same segment as brands like The Cheesecake Factory and P.F. Chang’s. It strives to elevate the customer experience through a restaurant design approach that includes mural ceilings, interior columns and arches, palm trees and statuaries.

“We also include extensive seafood, steak and chicken options, as well as traditional Tex-Mex, New-Mex and Cal-Mex,” Rambo says. “We try to offer a $25 experience for $15, and we design our service standards around that goal.”

Rambo says customers visit Abuelo’s not only for inexpensive lunches or quick dinners, but also for special nights out. In addition, he says the company is proud of the fact that it was ranked No. 1 in the Mexican cuisine segment in Consumer Reports multiple times in recent years. “We’ve also been ranked in the top 10 for all restaurants, including fine dining,” Rambo says.

Building on Success
To make sure that its quality and customer satisfaction levels remain high, Abuelo’s must keep tabs on consumer trends and adjust its menu offerings and approach to customer service as needed. Rambo says consumers are more educated and experimental in their tastes, and they are more demanding regarding each area of their experience.

In addition, he says consumers are looking for brighter flavors and healthier options. All of these factors require each member of the company’s leadership to be food-driven and spend a large amount of time looking at new and innovative concepts, systems and presentations.

“This allows us to continually improve our concept,” Rambo says. “We also have an in-house corporate chef, Luis Sanchez, that works with us to stay on top of consumer trends and keep moving forward.”

Another aspect of ensuring success is investing into the team of operators within the company. Rambo says that Abuelo’s must try to continue to find exceptional people to add to its team. “I would probably say that has been our most important investment area so far,” he says.

At the same time, Abuelo’s recognizes the importance of controlling costs and taking advantage of opportunities to invest in the latest in technology, especially in the areas of food and labor controls. “The margins in the restaurant business continue to be pressured due to the economy, commodity increases, new labor and healthcare laws, and a shortage of quality people,” Rambo says. “It is very important for everyone in this business to continue to invest in better people and systems to allow the opportunity to react to these pressures.”

After watching the economy and sharpening up its operations over the last few years, Abuelo’s has just begun to start moving forward with expansion plans. With three new stores set to open in 2015, Rambo feels the company should be able to grow by about 10 percent per year after that as long as the economy remains stable.

In the long term, Rambo understands that companies in the restaurant industry will continue to face issues such as shrinking margins and an economy that remains somewhat stagnant. These kinds of pressures are what force restaurants into decisions such as raising prices, which is difficult at a time when value is still top of mind to the consumer. But Rambo believes that Abuelo’s has devised a plan that will allow the company to compete.

“We show value to each customer not only in the way we prepare our food, but also with the experience that we offer,” he says. “Despite the issues that are out there, we are positioned to excel and are very excited about the next few years.”