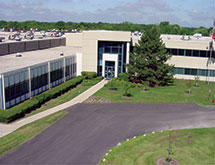 Cavitt says the company’s success is the result of the values of hard work and high quality that her father, Bernard Cavitt, instilled within the company. Even after the elder Cavitt had introduced the second generation of family leaders to the company, she says, he remained strongly involved in the day-to-day operations for a long time afterward. “He definitely had a strong work ethic; he was a workaholic,” Cavitt says. “He was still coming into the office until just a few years ago.”

Bernard Cavitt and his wife started the company out of their apartment with very little in the way of resources. What was originally a very small company eventually grew into one of the leading vending companies in the Midwest, adding office coffee service, catering and foodservice. “It’s truly a great American entrepreneur story,” Vice President of Sales Roger Sweeney says.

Today, Ace Coffee Bar serves a very eclectic customer base that includes community colleges, hospitals, business and industry, and government accounts. Sweeney says vending sales make up the largest portion of the company’s revenue, but its coffee and foodservice divisions are successful enough to stand on their own.

Fresh Foods
Ace Coffee Bar’s vending division is one of the most successful in the country. Cavitt says that’s due in large part to the fact that when people buy a snack or a cup of coffee from one of the company’s machines, they know they’re not getting something that’s been sitting in the machine for a long time. Ace turns its warehouse inventory four times a month. More importantly, the company has its own bakery and commissary, so it can guarantee the freshness of all of the items in its machines as well as the quality of its ingredients. Whereas its competitors mainly purchase premade packaged goods, Ace Coffee Bar offers its customers more. “All the food that we prepare is made from scratch,” Sweeney says.

Cavitt says the company also roasts its own coffee, which means the beans are less than three weeks old before they are put in its coffee machines. The coffee delivered to Ace’s office coffee customers is equally fresh.

Along with the superior product the company offers, Sweeney says Ace Coffee Bar also finds success through its customer-centric culture, which he says takes no customer for granted and never tells them “no.” Rather than tell customers that they can’t get exactly what they want, Ace Coffee Bar works to figure out how to deliver what they ask for without exception. “We’re never trying to shove square pegs into round holes around here,” Sweeney says.

Cavitt says one of the biggest factors in the company’s ability to meet its clients’ needs is the fact that Ace Coffee Bar has three locations, covering 25 counties. She says this makes it easier for the company to reach customers with the freshest product and the right product mix.

Community Commitment
Ace Coffee Bar is committed to serving the community in other ways, as well. Sweeney says the company donates unsold food from its various divisions to local homeless shelters and food banks. The company produces nearly 12,000 food items every day, he says. Not all of that food is sold, meaning Ace Coffee Bar makes a significant contribution to the area’s needy.

Ace Coffee Bar, through its various divisions and sister companies, also donates a significant amount of its profits to various cancer charities in honor of Cavitt’s mother, Elizabeth.

Growth Mode
One of the biggest challenges for Ace Coffee Bar is dealing with price pressures, Sweeney says. Although suppliers have been raising their own prices for a while now, a penny per unit here and two pennies there, Ace Coffee Bar has to absorb those cost increases because raising its own prices on vending machine items is incredibly difficult. Unlike retailers that can simply change the value of an SKU in their central computer system, Ace Coffee Bar has to make that change thousands of times, touching every vending machine it owns. “So you can’t go out and do it for a nickel at a time,” Sweeney says, “that isn’t an efficient use of labor.” He adds that it takes an average of six months for Ace to change the price on a single item in all of the company’s machines.

Sweeney says the other major challenge sweeping through the industry is a decrease in industrial customers because of offshoring. These challenges have caused many smaller operators to sell or simply close, but Ace Coffee Bar is adding customers. “Right now, we are adding business about as fast as we can add it,” Sweeney says.