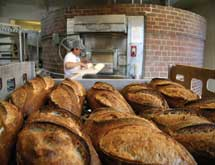 Bread is an important part of American culture. It’s a food that brings people to the table, it’s what holds a sandwich together and it’s one of the first items served at a restaurant. However, as important as this element from the grain group is, the art of baking it and serving it with pride got lost.

“By 1980, commercial bread making had drifted into a less-than-ideal situation,” President and Co-founder Steven Sullivan says. “In the [San Francisco] Bay Area, there was a pent up desire for better bread.” So, in 1983 after baking for the previous several years at Berkeley’s Chez Panisse restaurant, Sullivan and his wife Susan answered that call for better bread and formed Acme Bread.

“The quality of commercial bread had declined and the owners of other local restaurants and stores were asking us if we could bake bread for them as well.” Sullivan says. “The notion of a modest, local, artisanal, wholesale bread supplier had largely disappeared, even while there was a culinary refocusing going on in the Bay Area and the community was calling for better food at every level.”

The Berkeley-based company started baking its artisan bread for restaurants, grocery stores and hotels in a small space using traditional baking techniques and processes that had been on the wane in the industry for years. Sullivan says the bread baking industry became too automated in the 1970s and ’80s and was more concerned with delivering a product fast and cheap than taking the time to actually make good bread. “We try to make the best possible bread we can every day,” he explains. “We’ve revived traditional wholesale craft by using people instead of machines.

“There’s a fear that if you make bread by hand, it’s going to cost too much,” Sullivan adds. “But the difference is a matter of cents. You can have the best bread for only marginally more money.”

Acme now has four locations including one in San Francisco’s historic Ferry Building Marketplace. The Ferry Building’s food shops and restaurants – both large and small – are operated by some of the city’s best chefs and represent the quality and cultural diversity of the San Francisco Bay Area’s culinary traditions. Wholesale production is Acme’s primary focus and comprises 85 percent of its business. The Ferry Building, where Acme also serves simple sandwiches, and one corner of the company’s original 1,500-square-foot Berkeley wholesale facility, are its only retail operations.

Even though business is brisk at the Ferry Building, Sullivan says Acme isn’t looking to expand its retail presence or get into the sandwich business. “We’re not expansion-oriented,” he notes. “We believe in a model of making food for the local community. We don’t deliver to places more than one hour away from the bakery. Our goal is to bake the best bread we can and bring it to the people who ask us for it.”

People have been asking them for it. Sullivan says Acme Bread has been named best bakery in several local readers’ polls in newspapers and magazines. He also has noticed several of the company’s restaurant clients have been included in these readers’ polls as having the best sandwiches. “I see that in the polls and say to myself, ‘Hey, that’s our bread,’” Sullivan quips.

Not only does Acme provide the Bay Area with some of the best bread, the company is a good member of the community to have around. In an attempt to be a good neighbor, the company is trying to reduce its environmental impact by using biodiesel delivery vehicles and solar power, and has even changed the cleaning products it uses.

The company also has a charitable aspect. Sullivan says Acme is a big supporter of public education and donates bread to numerous groups including homeless shelters and student co-ops.

“People need to see that it is possible for them to succeed in a food manufacturing business without sacrificing their commitment to quality, or their environmental and social responsibilities,” Sullivan exclaims.