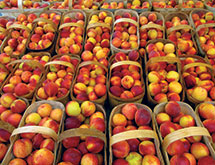 The goal of A&J Produce Corp. – which is headquartered in Brooklyn, N.Y. – is to serve the exclusive needs of each and every customer in New York and the Northeast by providing the highest-quality produce with unparalleled customer service. “Through the determination of the company’s experienced staff, A&J Produce Corp. strives to be the premier supplier of the healthiest and freshest produce available at the most competitive pricing,” the company says.

In May 1977, three good friends founded A&J Produce by acquiring three units on Row A in the Hunts Point Terminal Market in the Bronx, N.Y. Today, nearly 40 years later, a much larger A&J Produce still thrives on the same principles that Al Weiler, Joe Levantino and John Tramutola brought to market that first day – quality, service, freshness and value.

Weiler, Levantino and Tramutola were by no means new to the produce wholesale industry. In fact, the three of them had more than 75 combined years of sales experience. In 1987, Weiler and Tramutola bought out their partner and expanded the company.

A&J Produce has increased in size to include multiple units on both Row A (126-133, 137-144) and Row D (450- 463) of the Hunts Point Terminal Market. Today, A&J is one of the largest wholesalers of fresh fruit and vegetables in the Hunts Point market.

Fresh and Organic
A&J Produce has grown over the years to include the entire range of fresh fruits and vegetables, both conventional and organic. The vegetable department sources from around the world. Products it sells originate in the United States, Europe, Mexico and even Central and South America. All the major products are provided on a year-round basis.

The company also has become an important supplier of all of the major categories of fruit from around the world. Cherries, grapes, pears, citrus, apples and peaches are just some of the fruit that A&J provides. It prides itself on having the freshest fruit from some of the best growers in the world.

A&J Produce also carries a full variety of some of the best mushrooms in the world. With products originating from Pennsylvania to Canada and upstate New York, A&J Produce provides consistent service and goods at the best possible price.

“A&J’s core values are integrity, teamwork, open and honest communication and being client- and customer-centered,” the company says. It has been a Blue Book Trading member since 1987 and a winner of the Red Book Business Character Award.

Hunts Point
The history and growth of A&J Produce Corp. is inextricably intertwined with that of the Hunts Point Terminal Market, which says it is the largest wholesale produce market in the world. Located in the Hunts Point region of the Bronx on 113 acres of property, the market includes approximately 1 million square feet of interior space. It offers a diverse selection of fruit and vegetables from around the globe delivered fresh daily by plane, boat, rail and tractor-trailer from 49 states and 55 countries.

Through the years, Hunts Point Terminal Market has maintained the traditions of its predecessors. “We uphold traditions of excellence, quality, hard work and family,” the market says. Some of the market’s business proprietors are second- and third-generation businesspeople whose roots trace back to the Washington Market, which was located on the Lower West Side of Manhattan and operated there from 1812 until the early 1970s.

The market operates as a cooperative with an elected board of directors overseeing the internal business affairs of the more than 50 businesses and approximately 10,000 employees working in the market. It is open five days a week, 24 hours a day, and prides itself on offering the freshest produce to New York City’s secondary wholesalers, such as A&J Produce Corp., and the region’s upscale restaurants, restaurant suppliers and bodegas.

“We cater to the largest ethnically diverse region in the world, with an estimated population of 22 million,” the market says. “Our clientele is as varied and vibrant as our produce.” At the end of each day, the market donates its remaining food to organizations serving underserved segments of the community, including the Food Bank of New York City and City Harvest.