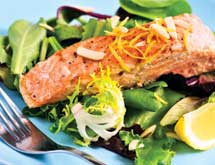 The oceans are vast and, as it turns out, so are our appetites. Canada’s Atlantic fishing industry learned that the hard way when overfishing depleted Atlantic cod resources. A moratorium was put in place, but after 20 years the species is just now beginning to come back and has a long route to travel before it is healthy enough for commercial fishing. John Milobar, president of Western Canada-based Albion Fisheries, says for the seafood market to remain viable, the fishing industry has to focus on sustainability.

“This is our livelihood,” Milobar says. “Albion Fisheries does nothing but seafood; our revenue is based 100 percent on seafood. We can only survive with healthy oceans and healthy seas. If they’re not healthy and if we’re not harvesting the oceans sustainably or raising fish sustainably, we won’t last another 50 years. We want to make sure seafood is available for the next generation for both our retail and foodservice customers.”

To make sure its products stay available for years to come, Albion Fisheries fosters relationships with companies and fishermen that practice sustainability, and it has become a leading voice in sustainable fishing. In fact, when evidence of overfishing of Chilean sea bass became evident about a decade ago, Albion Fisheries voluntarily suspended selling the popular item. It works with ocean conservation organizations such as Ocean Wise, SeaChoice and others and carries products with the programs’ stamps of approval.

Aqua Alternatives
Although its total product list isn’t 100 percent certified, Milobar says that is where the company’s future lies and it is diving in head first. It’s also not limiting itself to straight-from-the-ocean products. To keep the oceans healthy and teeming with life while still meeting consumers’ insatiable seafood appetite, Milobar says the company is diversifying by working with sustainable aqua farmers.

“Because of our focus on sustainability, we are working with the ‘Namgis First Nation of Vancouver Island,” Milobar says. “What they are doing — and they are the first to do this in large volume production — is they are land-raising salmon that is sustainable and at a significant enough amount to be commercially viable. It’s revolutionary in terms of scalability in growing land-based salmon, and we are the exclusive partner with ‘Namgis to sell and distribute that product.”

The ‘Namgis Closed Containment Project is growing out Atlantic salmon to 3 to 5 kilograms in a land-based, closed-containment recirculating aquaculture system (RAS). The project comes from a desire to find an alternative to farming Atlantic salmon in open net-pens.

RAS has been proven to be commercially viable for other fish species and ‘Namgis First Nation has teamed with the Save Our Salmon Marine Conservation Foundation and Tides Canada to prove its viability in the salmon industry.

From Production to Plate
Albion Fisheries seeks out safe and quality producers because it holds itself to that same standard. Its brand-new 65,000-square-foot processing facility that began production Jan. 7 was designed by world-renowned quality seafood expert and Albion Fisheries Director of Quality Assurance Musleh Uddin.

The facility was designed for maximum product flow. Uddin designed a system where fish that don’t meet stringent standards are immediately kicked out and never enter the facility. Seafood that makes the cut travels down a corridor and goes to the appropriate area.

“The facility is refrigerated from door to door and each zone has various temperature ranges that they are allowed to operate in,” Milobar says. “If it goes outside of that operating range, an automatic notification is sent to the refrigeration and operations manager and he goes to the plant to make sure everything is put back into place and make sure the temperature falls within the specified range.”

From the source to its facility, Albion Fisheries takes measures to make sure the product its customers sell to their customers is something they can trust. By creating a marketplace for sustainable seafood and setting stringent safety standards, Albion Fisheries is helping to ensure the viability of the seafood industry for the long term.

“Most of us working at Albion have either children or grandchildren or both,” Milobar explains. “We’re interested in seeing the oceans thrive and allowing our children to eat the same seafood we enjoy.”