Alicart enhances its operations with the adoption of new software.

“No matter whether you eat at one of the nine Alicart Restaurant Group’s locations in Las Vegas, New York, Washington D.C., Atlantic City, or the Bahamas, the customer experience is always the priority at Alicart,” CEO Jeffrey Bank says. “We are a ‘food first’ company,” he says, noting that all of the Alicart restaurants follow strict guidelines, utilize the finest ingredients and continue to follow tried-and-true family recipes.

Founder Artie Cutler started the company in 1990 with Carmine’s in New York City. “It was one of the first large-scale Italian family-style restaurants,” Bank says. Cutler wanted guests to feel like they were “going to an Italian wedding with platters of homemade pastas, old-school Italian recipes and classic red sauce dishes,” he notes. 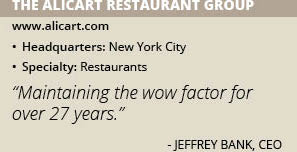 After Bank joined Alicart in 1999, the company launched Artie’s New York Delicatessen, which was featured on “The Martha Stewart Show.” Over time, he decided to grow the Alicart brand, opening Carmine’s locations in Atlantic City, N.J. and Washington, D.C., and both Carmine’s and Virgil’s in the Bahamas and in Las Vegas.

Cutting-Edge
Today, Alicart has nine locations and a staff of 1,500 employees. But even with its growth, the company has kept its operations consistent thanks to “a tremendous amount of software we use to get us through the day,” Bank says. This includes Venga, which collects and analyzes customer data.

Venga enhances Open Table, a reservation software used throughout the restaurant industry, and which sends pre-shift reports directly to the staff’s phone. Not only can the company see how many people have reservations at a specific restaurant, it also indicates if they are regular customers and what their preferences are.

This helps if one of Alicart’s Vegas locations is visited by a customer who frequents one of its New York City locations. “Venga takes your Open Table to another level and allows us to offer an unparalleled guest experience,” Bank says.

Another important product is NCR’s Restaurant Guard, which scans for any anomalies that occur in the hundreds of thousands of transactions that occur in Alicart’s restaurants daily. “This has artificial intelligence built in to identify any issues,” Bank says.

“It’s a huge deterrent.” he says. “The management can go about the business of running a restaurant, while the software scans thousands of transactions for fraud.”

Although technology has brought benefits to Alicart, the quality of its food and service remain its most important areas of focus, Bank asserts. “We don’t want to be to be in the technology business,” he says.

Unlike some restaurants, the company has avoided adopting hand-held server tablets. “It’s great technology, but we feel it takes away from the customer experience,” Bank says.

The tablets, he explains, keep the servers’ eyes away from the guests. “So while there can be technology out there that seems amazing, it can also negatively affect your service and brand,” he says.

Staying True
Bank is proud of Alicart’s organic growth and how it has stayed true to its original values. “We’ve maintained the food and quality of a scratch kitchen, which very few restaurants can do, especially at our scale,” he says. “Our restaurants average in size form 400 to 800 seats, each!

“It is our goal that a customer in New York and Las Vegas can order our calamari or chicken parmesan and it will be the same at all of our locations. And we are doing this with the freshest ingredients available and from-scratch dishes that are made to order.”

The company also has longevity in its staff, which still includes several original employees. “We’ve watched people get married and have kids here,” he says, noting that one Carmine’s employee started in its prep kitchen and now is the head chef. “It’s exciting to have that longevity.”

Bank sees a strong future for Alicart, and plans to bring an Artie’s location to Las Vegas and expand to Florida. “We’ve had a couple of conversations with Disney,” he says, adding that the company also may expand to Canada and Aruba. “Carmine’s can basically go anywhere.”

But the company is not worried about competition. “Our only competition is execution.” No one else is doing what we’re doing,” he says. “We’re serving large, bountiful plates of incredible food at a reasonable price.”

Alicart also plans to adopt more targeted technology along with incorporating conveniences for the private parties it hosts as well as seamless ordering for to-go orders. New advancements also may someday include mobile pay, allowing guests to leave restaurants at their own pace instead of having to wait for a check. “I’m looking forward to the day when at the end of your meal, instead of the look to get your check, then swipe, then leave tip etc. ‘dance;’ instead, true integrated POS mobile pay will be a blessing for all,” Bank says.