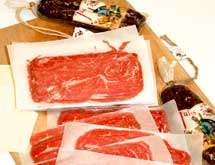 Allied Specialty Foods started out as a small operation producing raw, thin-sliced steak for food¬service customers. Over the past 50 years, however, the company has diversified to include chicken and sausage, sliced in a number of ways. Although the company has changed over the years, Vice President Darren Buseman says it still considers itself a niche company, and that doesn’t bother it one bit because it means there is one thing it’s better at than anyone else. “Whether you want to or not, you fall into a niche that you’re good at,” he says.

Based in Vineland, N.J., Allied Specialty Foods supplies whole-muscle thin-sliced steak and chicken to customers nationwide. Buseman explains that foodservice companies make up the largest portion of its customer base, with restaurant chains a close second. The company’s fastest-growing customer segment is industrial, Buseman says, which includes meal manufacturers and frozen food companies. Its products are used in sandwiches, pizza and stir fry, among other applications.

Even though the company has evolved into a “full custom protein company,” according to Buseman, Allied Specialty Foods still thrives primarily because of its core product lines. “Our core is still raw sliced beef and chicken steak,” Buseman says.

Quick and Nimble
Although Allied Specialty Foods is a true national distributor, Buseman says it still is considered a smaller player in the marketplace. However, that suits the company just fine, as Buseman says the company’s relatively small size means it has greater flexibility than many of its large-scale competitors. Because the company is smaller, it avoids a lot of the red tape and delays that often come with a large, complicated corporate structure. “We can make decisions quickly,” Buseman says. “I think our size also helps us to where we’re large enough and we have enough open capability to handle any product, but we can also get the small local provider who needs private-label products.”

Buseman points to the company’s ongoing diversification in its product line as another advantage Allied Specialty Foods brings to the table. Buseman says the company has added not only thin-sliced chicken, but also diced chicken and chicken strips in recent years. “We’ve acquired three or four new pieces of equipment to make that easier,” he says.

Strong Relationships
Buseman says Allied Specialty Foods’ relationships with its suppliers are an integral ingredient for its success, and one that has become increasingly important in light of Americans’ changing dietary habits. Buseman says trends such as reduced sodium and gluten-free foods make coordination with suppliers very important.

In particular, Buseman says the company’s recent decision to switch to packaging supplier SupplyOne has been a good one for Allied Specialty Foods. “They’re pretty much a one-stop shop,” he says.

Buseman adds that the company considers a successful relationship with a long-term supplier to be more important than saving money. “Pennies aren’t going to make a difference – it’s generating the relationship and building the confidences,” he says.