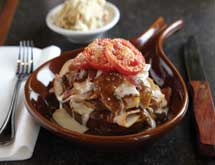 It’s not hard to imagine that a professional football player – an All-American from the University of Alabama and a six-time All-Pro for the Miami Dolphins – knows a thing or two about effective competition. Though the gridiron and the restaurant business are not similar playing fields, Bob Baumhower has achieved substantial success in both professions, and with pride in his current team, he is looking forward to the future.

Baumhower was drafted by the Dolphins in 1977, and had many successful seasons with them as part of the team’s “Killer B’s” defense. By the time he retired from football after the 1986 season, however, he already was achieving success in the restaurant business after introducing University of Alabama students to Buffalo wings in 1981 with the Wings & Things concept.

Offering counter service when it opened, Wings & Things evolved, and now is a full-service concept known as Baumhower’s. Baumhower’s is one of the concepts under the Aloha Hospitality umbrella, along with Bimini Bob’s and Wings U. A “focus on fresh” is what all three concepts have in common, according to Baumhower, and has fueled their success.

“Fresh ingredients are what we focus on,” he stresses. “Quality is what we are known for, and a big part of quality is paying attention to what you buy. We buy as much local as we can – all of the shrimp we serve is from Bayou La Batre, Ala., and the catfish we serve at Baum­hower’s is from Alabama-based farms. We have great relationships with local suppliers, which helps ensure we get quality and fresh ingredients.”

“Here in the South, and especially in Alabama, our pride runs deep in football and food,” the menu states. “There’s no place for shortcuts in either one.”

As a result, the Baumhower’s brand sources its meats and vegetables “from the farm, not the freezer” and its “Southern specialties” are all cooked with care, as are its steaks, burgers, salads, “sand-wedges” and signature wings.

“We have had a great following from the start,” Baumhower says. “Baumhower’s has a sports theme and is known for our chicken, steaks and burgers, but we also sell a lot of wings. However, our wild Alabama grilled shrimp also is becoming popular.”

In the past year, the quality of Baum­hower’s wings has been widely recognized. In October, the Kick’n Chick’n Birmingham Wing Fest awarded Baum­hower’s with “The Thighsman” for Best Buffalo-Style Hot Wing and the People’s Choice Award. Additionally, Baumhower’s received the Nappie Award for Best Wings from Lagniappe Magazine in Mobile.

Tastes of the Caribbean

The Bimini Bob’s concept, located in Daphne, Ala., has a Caribbean theme and is known for “good, local seafood,” Baumhower explains. He launched this concept about two years ago after many visits to Bimini, a region of the Bahamas across the Gulf Stream from the southeastern coast of Florida. He says his memories from visiting that area are full of “real people, real food and real hospitality,” and aims to recreate that experience in Bimini Bob’s.

“Bimini Bob’s is a waterfront restaurant on the east coast of Mobile Bay,” he explains. “The Ivan and Katrina hurricanes hurt a waterfront location that we used to have, so we located Bimini Bob’s about 20 miles away from the gulf coast, giving it more protection.

“This is a full-service casual restaurant that focuses on Caribbean cuisine and local dishes,” he continues. “We have a lot of fresh fish and a fantastic seafood platter. We cook it all by grilling the food on a pecan-wood fire.”

The seafood at Bimini Bob’s includes the Eastern Shore Jubilee Combo, Coconut Cay Fish in a Tin and the Cat Cay Cracked Conch Platter, but it also offers items like the Bahama Cowboy Steak and Bootie Bay Jerk Chicken.

Although the quality remains consistent across all of Aloha’s brands, the Wings U concept focuses less on seafood and more on wings, pizza and other food college students crave. Based in Tuscaloosa, Ala., Wings U caters to the tastes of the students of University of Alabama, which is Baumhower’s alma mater. The first Wings U opened in fall 2010, and the next one will open by early 2012, Baumhower says.

The signature wings are “fresh, never-frozen jumbo chicken wings,” that are fried in pure vegetable oil and served in a range of temperatures and flavors to satisfy those with mild tastes as well as those looking for a lot of heat. Available in “torched,” X-Hot, Hot or Mild, its flavors include BBQ Seoul, Vidalia Onion, Honeybee Garlic and Goombah. The Wings U menu also features a variety of burgers, hot dogs, salads, hoagies, po’ boys, desserts and coal-fired pizza.

“Wings U is obviously known for our wings, but we also have the first coal-fired oven in the state of Alabama,” Baumhower says. “We serve New York-style, coal-fired pizza made in a state-of-the-art oven from Wood Stone Corp. At wingsu.com, we have oven cams that let people watch what is going in and out of the ovens at any given time.”

Wings U offers a wide variety of toppings on its pizzas, as well as 13 specialty pizzas, such as the Pep Talk, Purple Haze, the Bayou La Batre, Johnny Musso Meatball and the Badda Bing. The menu also features calzones, and even the wings can be cooked in the coal-fired ovens if guests choose.

Aloha Hospitality’s goal is to provide “the best casual restaurants in the country.” Consistent quality in the menus is a large part of this goal, but good service also goes far in ensuring exemplary customer experiences.

To start, all of Aloha Hospitality’s concepts are equipped with systems and control forms to keep their operation simple and consistent in the level of service provided. The most important aspect of quality service, however, is the people, and Baumhower is proud of the teams that are in place at each concept. Employees receive thorough training and feedback, as well as formal evaluations twice a year.

“The people here are students of the game – everyone is always learning and working to get better,” Baumhower explains. “I’ve worked with a lot of good coaches in my career, so I learned a lot from them about creating great teams. At our restaurants, we hire good people and take a lot of time to train them properly. From there, we keep folks motivated by making sure they feel good about what they’re doing. We combine great food with well-trained, smiling faces, which leads to good experiences for our guests.”

Baumhower believes all three of Aloha Hospitality’s concepts are strong enough to expand, but the company is moving slowly during this uncertain economy. It’s the team at each location, he stresses, that will enable all three concepts to remain as successful as they are now and grow in the future.

“We have a great team made of folks that care, and I am very proud of that,” he says. “We provide a good work environment, so our people feel secure in their jobs, which means a lot in this economy. You need a good group of folks around to succeed in any business, and we have a strong team of general managers and managers. I am very proud of what we’re doing and how we’re doing it at each location and with each concept, and we will grow by continuing in the same way.”