Back to Profile Gallery > Alpine Meats 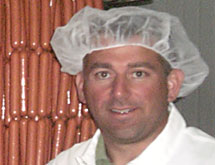 Alpine Meats has kept its family atmosphere intact ever since it was founded by a ­­Swiss immigrant who came to America with just $100 in his pocket. Now, 75 years later, Alpine Meats is the official hot dog and sausage maker for three professional sports teams and the undisputed taste champion in contests throughout Northern California.

Josef Kaeslin Sr. founded Alpine Meats in 1936 when he arrived in Stockton, Calif. He graduated butcher/sausage-making school in Switzerland and honed his craft here in the United States. Today, Josef’s grandson Trent Kaeslin is at the helm of the family owned company. Alpine Meats remains true to the philosophies of its founder by avoiding artificial flavors and using only fresh meats and premium spices in small-batch production of its sausage, hot dog and ham product lines. Although numerous competitors make the claims to be as fresh and organic as Alpine Meats, the true difference comes in the hickory wood chips it uses to slowly smoke the products.

“We’ve been naturally smoking our products with wood chips since 1936,” Trent Kaeslin says.

Alpine Meats has served as the official hot dog and sausage maker of Major League Baseball’s San Francisco Giants since 1993, when its western beef frank beat more than 18 other manufacturers – including some national players – for the honor. Since then, the company has served as the vendor of choice for the San Francisco 49ers and the Arizona Cardinals of the National Football League, as well.

To maintain relationships with high-profile customers like these, Alpine Meats must stay on top of the latest technological advances. In fact, Kaeslin says Alpine Meats has invested more than $1 million in machinery for its 50,000-square-foot facility since 2009. This investment primarily upgraded the company’s private-labeling capabilities. Co-packing makes up about a third of the business, according to Kaeslin.

Another reason for the investment in new machinery is to combat the volatile costs of raw materials in the past 18 months. Kaeslin says Alpine Meats has had to research different packaging sizes to maintain price points without passing costs onto customers.

“The prices of raw materials have really skyrocketed the last year-and-a-half,” he says. “[The upgrades allow] us to maintain the quality of the product. There is still value there for the consumers with a sizing or packaging change, so we continue to give a good value in the marketplace.”

The longest tenure, however, belongs to previous CFO Jerry Singer, who has 55 years with the producer and even ran the company for a number of years. “Most employees are here for the long term, so there is not much turnover,” Kaeslin says. “We have a retirement program that pays reasonably well and we create a family atmosphere.”

One member of the family who is no longer with Alpine Meats is Joe Kaeslin, Trent’s father and predecessor as president of the company. He passed away about 10 years ago from cancer, and Trent Kaeslin says Alpine Meats works with the American Cancer Society by donating products or game tickets from the teams it represents.

Now that the company’s private-label business is firmly in place, Kaeslin plans to expand the brand. Alpine Meats’ goal is to grow 10 to 15 percent each year within Northern California, and then go beyond those borders.

“We try to add at least one new product a year to keep things fresh,” Kaeslin says. “We develop them in-house because we’re aware of what’s going on. We typically stay in our wheelhouse, so we’ll stay within sausages, hot dogs and hams.”