Back to Profile Gallery > Altamarea Group 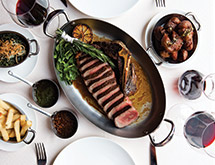 As a child born in Egypt and later growing up in Europe, Ahmass Fakahany was fascinated with food, restaurants and the hospitality business. When, as a young man, the time came for him to further his education and choose a college, his initial instinct was to pursue a future in the industry he long admired.

Fakahany’s first choice of college was the Lausanne Hospitality Management School in Switzerland; however, the prestigious school’s admission requirement of fluency in four languages made it inaccessible to him at the time. Instead, he went to the United States to attend the Boston University Questrom School of Business and later the Columbia University Graduate School of Business.

Fakahany proved to be highly successful in the business world. After initially working for Exxon Corp. in various capacities, he would go on to work for financial giant Merrill Lynch. His 20-year path through that company led him to the very top – as president and COO, Fakahany would oversee Merrill Lynch’s more than 63,000 employees in 40 different countries.

Even as one of Wall Street’s most influential and noteworthy figures, Fakahany remained keenly interested in the food and restaurant world. “My underlying passion for food and wine never died,” he says. Fakahany’s position at Merrill Lynch often brought him to many of New York City’s finest restaurants, where he would meet and do business with many of his clients and peers.

It was at one of his favorite restaurants, Fiamma Osteria in New York City’s SoHo neighborhood, where in 2003 he would meet Michael White, the restaurant’s executive chef. White was building a reputation as one of the city’s rising culinary stars, having received a three-star review from The New York Times and a “Best New Chef” nod from Esquire. “[White] loved hearing about business, and I loved talking about food,” Fakahany says.

The two found chemistry and agreed one day to work together. That opportunity came three years later, when Fakahany approached White about opening Due Terre, a modern Italian restaurant in Bernardsville, N.J. The restaurant opened in 2006, and was followed closely by Due Mari, a seafood concept in New Brunswick, N.J. Both restaurants quickly received rave reviews.

The success of these endeavors led Fakahany to “take a crazy chance to reinvent myself and follow my heart” and after deciding to leave his position at Merrill Lynch in 2007, he pursued the restaurant business exclusively.

Rapid Growth
Fakahany and White in 2009 expanded their burgeoning restaurant empire to Manhattan when they opened Marea, a seafood-based Italian concept on Central Park South. The restaurant received the highest honors including two Michelin stars, the James Beard Award for Best New Restaurant in 2010, a three-star New York Times review and nods from Bon Appetit, Esquire and GQ.

With three successful restaurants under their belts, Fakahany formed the Altamarea Group in 2010 to manage their holdings and expand the business further and more efficiently. Today, the group consists of 18 restaurants in New York City; Westchester, N.Y.; New Jersey and Washington, D.C.; as well as international ventures in Hong Kong, London and Istanbul, Turkey.

The company’s newest concept, Vaucluse, opened at the end of August and is Fakahany and White’s first new restaurant since 2013. It has been a four-year project from inception to conclusion and a culmination of their strong collaboration. Vaucluse is located at Park Avenue and 63rd Street in Manhattan in a location that has housed restaurants since 1927, and it is one of only a few standalone restaurants along Park Avenue. The brasserie-style restaurant serves traditional and modern French cuisine. “This is a very iconic address,” Fakahany says. “This is one of the most important openings we’ve ever had, and is truly a big moment for us.”

Attuned to the Market
Although the timing of the company’s founding coincided with the Great Recession, Fakahany says its restaurants continued to thrive because of their quality of food, focused service, as well as the approachable nature of the restaurants. “We listen very carefully to our clients,” he says. Altamarea offered value to diners and also emphasized several dishes for sharing and broad menu options to suit many tastes and diets.

“We kept the look and feel of our restaurants sleek but understated in their elegance,” he adds. “Our menus are very much in tune with where food tastes are evolving while still concurrently creating something that New Yorkers saw as being accessible and comfortable. We did not compromise when it came to quality, and stayed true to our product and vision.”

Altamarea Group’s restaurants fall into four main concept categories, which the company refers to as “brand columns:” high-end fine dining, mid-priced to upper priced, casual dining, and lastly what Fakahany calls “mass access:” family oriented restaurants such as pizzerias with average cover prices of $20 to $30. The company builds its growth across those distinct brand segments.

The company regularly updates its menus to reflect seasonal items and changing customer preferences while maintaining the staple items for which they are known. “There are dishes we serve that people think about in advance and even fly across the United States to have,” Fakahany says. “Our clients guide us every day and are part of forming our path forward.”

‘Winning Together’
All of Altamarea Group’s concepts operate under a unified management team – from financial management, cost efficiency and purchasing structure all the way to creative brand development. “We intelligently take advantage of scale as well as my background in business wherever it is useful,” Fakahany says. “My business side is linked with my creative side; it’s hard to separate the two.”

The company refers to its internal operating philosophy as being one of “winning together” and operating as “one team and one voice.” The company has invested heavily in its central headquarters staff, which includes financial, legal and human resources personnel who work closely with both Altamarea’s front- and back-of-house staff. Central staff regularly performs financial modeling and analytics to determine inventory and ordering levels across the organization and monitor restaurant performance. “We are one integrated team and share our resources,” he adds. “I invested in the headquarters early; I feel that we would not have grown the way we have been able to without that support platform.”

One of the company’s largest investments has been in technology including cloud-based ordering, financial and inventory systems. The company also has customer relationship management (CRM) capabilities in place. Altamarea staff also closely monitor and engage actively in social media. “Our clients are constantly communicating with us on what they like and what they want from our restaurants,” Fakahany says.

The restaurants’ response to social media comments can be swift. A client in one of the company’s New York restaurants last year aired a complaint about the chair he was sitting in being too tight on Twitter; within two minutes, he was given a new chair.

The philosophy of “winning together” extends to the staffing of its restaurants. It is not uncommon for management, wait staff and other personnel to move around from one Altamarea concept to another. Personnel transferring from a higher-end to a mid-tier concept retain their salary. “One of the most distinctive things about our group when compared to others is that our retention rate is very high,” Fakahany says, noting the company has a 90 percent retention rate in all key positions. “We keep our creativity in the company and move people around; they can have multiple careers and grow with Altamarea instead of leaving us.”

Retaining much of its staff throughout its history has helped the company achieve consistency in its food and service. “My feeling is that the restaurant business is not as kind as other businesses in terms of human capital management, as people leave easily and are often not treated well,” he adds. “We have put a stop to that; although we still have some turnover, our high retention rate has kept our quality very high, and the client in turn benefits from it.”

Vendor Relationships
Altamarea Group’s vendors play an important role in keeping the company’s quality consistent. “One thing our vendors do very well is to understand our needs, and when that becomes more expensive, suggesting alternatives that we can adapt to quickly,” Kitchen Operations Manager and Corporate Chef Amador Acosta says. “Our vendors are transparent with us and tell us when fluctuations in the market will be coming so we can plan around it before we’re hit by it. Our vendors understand that if we’re doing well in business we will stay in business with them longer.”

The company’s connections to its clients and overall ordering process is strengthened by purchasing platform Dine Market. The platform, which is accessible on mobile devices as well as computers, offers real-time pricing information for produce, meat and other purveyors.

Altamarea Group adapted the platform recently, after it was updated to include additional vendors. “Previous to that, they just carried information about vendors they were specifically working with,” Acosta says. “Today, I can see not only their registered vendors, but the ones we’re already using who know our specs and what we’re looking for.”

Altamarea’s vendors send pricing lists directly to Dine Market, which updates their program with that information. Acosta also provides pricing information to the software developer. “Normally when you order, you don’t see price totals or weight totals until the next day,” he says. “With Dine Market I can make orders, see totals, compare that to my budget and make adjustments all at once.”

The company’s food vendors include wholesaler Pat LaFrieda Meat Purveyors, which provides all the meats offered in Altamarea’s U.S. restaurants. Altamarea sources most of the produce for the dishes served in its New York restaurants from Baldor Food. Lobster is provided by Homarus Lobster, which delivers to Altamarea’s restaurants seven days a week. “They always have the best lobster at the best price, and if they happen to not, I can give them a call and they will change their pricing,” Acosta says. “[Homarus] has become our No. 1 lobster provider by giving us the most transparency and flexibility.”

“All of the chefs in our restaurants have worked with them or want to work with them because they have a great product, so we approached them for [their products],” Acosta says. Disposable kitchen items, kitchen smallwares and similar items are provided by I. Halper Paper and Supplies Inc. of Bayonne, N.J.

Kitchen and refrigeration equipment and HVAC systems are provided to the company by two divisions of Air Comfort Service Group.

“They do a great job for us and really help keep us running,” he adds. In addition to providing timely service in the event of a maintenance issue, Air Comfort Service also performs weekly preventive maintenance calls at Altamarea’s New York restaurants. This service includes looking at compressors, evaporator coils and other parts.

“We’ve moved at the pace we have because we had the people, desire, concepts and right real estate deals,” he says. “From here, we will continue to build upon our brand strategy, particularly the casual and mass access segments.” Joint-venture partnerships with other companies are also a possibility.

The international market in particular is a growth area for Altamarea.

“I’ve lived in Asia and Europe and know more about those markets and how to operate in them than in some U.S. markets like maybe Seattle or Detroit,” Fakahany explains. “Our growth plan leans to international, as the world continues to evolve its culinary tastes and overall higher disposable income levels continue to grow. With growth in the ‘international foodie population,’ high-quality culinary offerings from New York are in strong demand.”