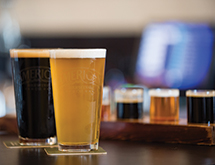 With microbrewing growing faster than macrobrewing, listing American Brewing on the New York Stock Exchange is the next logical step as the Edmonds, Wash., 2011 startup eyes eastward expansion. Sold in Washington, southern British Columbia and North Carolina, American Brewing’s co-founder, CEO, chairman and president Neil Fallon believes not only in beer, but in marketing.

American Brewing already has more than 100 shareholders – the largest of whom is Fallon – and once the company is approved by the regulatory agencies, it will be listed as an over-the-counter stock so it can be publicly traded.

But American Brewing is not really about the financing – it’s about the beer. To ensure that, Fallon hired Brewmeister Skip Madsen. “I’m a business guy,” Fallon concedes. “Beer to me is the vehicle. Beer to Skip is the world. So what I needed to bring legitimacy to me was somebody who was truly a beer guy. That’s what Skip brings for us. We call him the father of all beers, because he’s been around so long and worked at so many places in the Pacific Northwest that many of the best-selling brands of beer are his recipes when he worked there. Now he has gone on to superstardom.”

American Brewing’s flagship brand is an IPA. “Skip’s an IPA guy, and Breakaway IPA is one of our four core brands,” Fallon says. “When we first opened, Skip wrote down four recipes off the top of his head, and three are still in production today. We call it Breakaway because Skip loves hockey. He turned 58 in May and still plays goalie as a hockey player.”

“This past year, only four medals were awarded to Washington breweries,” he adds. “One brewery had two, we had one and Boundary Bay Brewery had one. Skip used to be the brewmaster there, and the beer they won their medal with was his recipe. So Skip is responsible for half the medals in the state of Washington.”

American Brewing’s distribution in North Carolina is due to the efforts of a dedicated distributor there. “Every time we win a medal at the Great American Beer Festival, we start getting mail and correspondence from distributors all around the country asking if they can distribute it,” Fallon relates. “I haven’t really been at a size that I could take many of these distributors up on their offer.”

But Freedom Beverage in North Carolina offered to take whatever beer American Brewing could ship to the distributor, whether in 22-ounce bottles, cans or on draft. “We’ll use it as an experimental ground to understand the issues involved with shipping beer across the country,” Fallon says. “At some point, I have to get my feet wet, and this was a way I could gently ease into that.”

The mobile canner transports his equipment in a trailer big enough for a racecar. American Brewing has cans produced with separate lids that are fed into the canning equipment. “He’s got a completely automated system,” Fallon points out. “We forklift a pallet of cans into the back of that thing, and his machine depalletizes, moves the cans, rinses them, fills them, puts the lid on and spits them back out. The only thing we have to do is check for low fills at the end and put the pack carrier on it. It’s pretty slick.”

New Brewhouse
Fallon’s marketing efforts are working, since American Brewing is just finishing a $1 million expansion. “Within the framework of an operating brewery, I had to build an entirely new brewery,” Fallon stresses. “We had to replace all the systems, make everything bigger – upgrade the glycol chilling systems, the electrical system, the tanks that we were using, the fermenters and bright tanks – make them bigger. It was really tricky because we could never turn the brewery off. We had orders that kept coming in, and if we took even a day off, we couldn’t fulfill everything. So we had to figure out how to sort of upgrade and build a bigger facility while we’re actually working on the facility.”

A new brewhouse manufactured in California was installed in the upgraded facility. “The brewhouse will allow us to brew more beer per batch, more batches in a day and allow us to get out a lot more beer,” Fallon promises. “We’ll be in new territories and expanding into new states. It’s really the platform for the growth and expansion across the country that we had planned.”

American Brewing currently has a tasting room at its brewery in Edmonds that serves a limited menu. Because of the higher profit margin with retail compared with wholesale, Fallon finds the cash flow from the tasting room helpful. “The tasting room is the key to survival while your brand is gaining traction,” he points out.

Hops to It
Another financial innovation Fallon is practicing concerns the escalating price of hops. To reduce costs, he is contracting for large quantities of hops, many of them rare, and selling the excess for cash or trading them for other hop varieties.

The company’s next expansion will be to add a full restaurant and gift shop to a very large custom brewery. Fallon is planning the restaurant in conjunction with Food Network author Simon Majumdar, who has been a judge on several of the network’s cooking competitions, such as “Iron Chef America.” The plan is to have celebrity chefs visit to create dishes that could be paired with American’s brews.

British-born Majumdar collaborated with Madsen on a beer for a book Majumdar was writing on American food. Fallon offered Majumdar the opportunity to enter the beer in the Great American Beer Festival, and it won a medal.

“It was a Babe Ruth moment,” Fallon recalls. “We called our spot, and we knocked it out of the park.”