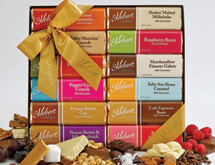 For years, Hebert Candies was a New England icon, known as much for its “candy mansion” retail locations as for its high-quality chocolates. Founded by Frederick Hebert in 1917, Hebert Candies grew from a small business operating out of its founder’s kitchen to a major regional success story. In 1947, Frederick Hebert purchased a Tudor-style mansion in Shrewsbury, Mass., which remains the company’s headquarters to this day. Hebert also holds the distinction of being the man who introduced white chocolate to the United States, bringing it over from Europe in 1956.

By the turn of the century, however, the brand was in danger of disappearing. After Frederick Hebert’s death, a lack of strong direction from new ownership kept the company stagnant. Enter American Gourmet Group LLC, the operating company of wholesale gift basket producer Gifted Expressions. According to CEO Sheila Shechtman, the combination of Hebert Candies’ high-quality products and American Gourmet Group’s distribution channels and branding expertise made for a perfect match.

Shechtman, with 34 years of experience in the gourmet food, gifting and branding world, says a goal of the company is to facilitate a “rebirth of a regional [Hebert] brand into a national presence,” and she says the combined skills of the companies and her management team, as well as some new initiatives, will make that happen.

Quality and Flavor
The Hebert Candies brand has been known for its high quality for decades, and Shechtman says that will not change. She says the kosher-certified factory continues to use premium-grade, all-natural chocolate and it avoids using artificial flavors. “We have equipment that allows us to infuse fillings into our bars vs. using artificial flavoring,” Shechtman says.

The company is putting those capabilities to use in its newest product line, a series of 18 filled chocolate bars that will be available under the Hebert brand as well as for private-label customers. “What’s different about our bars in many ways is that the recipes have been developed for the young and the old, covering all demographics,” she says, adding that the flavors include peanut butter and jelly, café espresso bean, coconut craze, mint cookie crunch and kettle potato chip.

Although many other confectioners have developed outlandish flavor combinations that latch on to foodie fads, Shechtman says Hebert Candies is sticking with tried-and-true classic flavors. “We don’t get exotic with spices or bacon bits,” she says. “We want the young and the older population to have nostalgic memories.”

What also makes these new chocolate bars unique is their size. Shechtman says the new bars are now being offered in a smaller 2.15-ounce size, as an alternative to the traditional 3-to-3.5-ounce size of most flavored candy bars. While Hebert also offers the larger bars, she says the smaller bars will allow consumers to make multiple purchases to sample all the different flavors. The company believes the private-label sector represents a tremendous opportunity for growth in the near future.

“What Hebert offers are lower-volume private-label opportunities so that our great-tasting bars can offer brand enhancement under a company’s brand, allowing for significant margins and differentiation,” Shechtman says.

Rebuilding the Brand
American Gourmet Group specializes in creating gift baskets and other gift bundles for major retailers including Neiman Marcus and Costco, and Shechtman says the company understands presentation and packaging make a huge difference with consumers.

“Branding is what our gifting company is all about,” she says. “For us, any products we offer are truly a component of a branding experience because it’s the impression after foods are consumed that has the consumer want more and creates lasting impact.”

Hebert Candies will be embarking on an “aggressive and ambitious” campaign over the coming year to re-establish the Hebert Candies name in three distinct markets: wholesale to large online mass-market merchants, brick-and-mortar retailers and direct to consumers from the company’s 15,000-square-foot flagship “candy mansion” in Shrewsbury.

In every market it targets, Shechtman says, Hebert Candies will deliver the same high quality and appealing flavors. “We target people interested in quality and value,” she says. “Everyone loves chocolate, and we are just making it more fun.”