Back to Profile Gallery > Amigos Foods 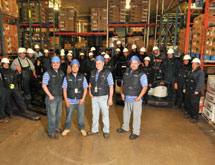 Amigo’s Foods is aptly named, as the nationwide meat distributor has been a good friend to customers in the industry for 20 years. As President Max Hurtado explains, the company has become a major success in the industry over the last two decades by concentrating on providing customers with everything they need in terms of protein and providing it at exactly the right time. With its emphasis firmly locked on providing exemplary customer service, Amigo’s Foods has big goals for the future, and there’s every indication that the company will be able to achieve them.

The company was founded in Houston in 1994 by partners Francisco Moreno and Rafael Ortega. It was opened because Ortega was having a difficult time sourcing meat for his meat market stores from other distributors. Over time, the fledgling Amigo’s Foods grew into one of the largest meat distributors in Houston, and in 2001 the company took a chance on entering one of the most competitive markets in the nation when it opened its distribution center in Chicago. Over time, the company became successful enough to open facilities in two new markets, adding distribution centers in Atlanta and Phoenix.

Amigo’s Foods prides itself on being able to provide the widest selection of proteins in the meat distribution industry. Along with beef, pork and poultry, Amigo’s Foods also carries seafood, lamb, goat, cheeses and several other specialty items. According to Hurtado, the majority of the company’s customers are Hispanic markets, with about 40 percent of its business coming from other sources.

The one element that is consistent across all market segments of the meat distribution industry is the ferocity of the competition. Hurtado says Amigo’s Foods faces fierce competition everywhere in the nation, but he doesn’t mind working hard to keep up with it. “Like in anything else, we all have competition,” he says. “Competition is good – it keeps you on your toes.”

Secret of Success
Hurtado says the formula behind Amigo’s Foods’ success is relatively simple: The company carries everything customers need, and it provides it to them whenever they need it. He says the sheer breadth of the protein options the company offers means customers never have to look anywhere else for their meats. “It’s like a one-stop shop,” he says. “You can buy everything you need. I tell my customers, ‘If we don’t have it, you don’t need it.’”

There’s more to successful distribution than simply having the products on hand, however, and Amigo’s Foods backs up the variety of its products with top-notch customer service. “We’re a service-oriented company,” Hurtado explains.

The company’s strategically located facilities make it easy for Amigo’s Foods to serve customers quickly and efficiently. “If they need something the same day, we get it for them,” Hurtado says. The company’s facilities are open 24 hours a day, seven days a week with the exception of its Chicago facility, which is closed on Sundays. However, when the need arises, Chicago will open its doors on Sundays in order to service its customers.

Also contributing to the strength of the company’s customer service is the fact that Amigo’s Foods creates strong, long-lasting relationships with its customers. Hurtado says many of its sales people have been with the company long enough to have formed solid friendships in the industry. Hurtado says Amigo’s Foods understands that it can only be as successful as its customers are. “If our customers go out of business, that’s another customer that we lose,” he says.

Bright Outlook
Hurtado says the advantages Amigo’s Foods brings to the marketplace go a long way to help the company deal with some of the challenges it faces. Chief among these is the rising cost of food, which has consumers buying less than they did in years past. Despite the current economic difficulties, however, Hurtado says the strong relationships Amigo’s Foods has with customers has meant it has not lost any business during the recession.

A significant change for the meat industry is the increased regulation on food safety and traceability concerns. “You have to be able to trace it back to the country of origin for each product that you sell,” Hurtado says. Although the regulations required Amigos to add a significant number of product codes and become more specific with its product descriptions, Hurtado understands the need for increased food safety.

Despite the ever-changing dynamics, however, Hurtado is optimistic about the future for Amigo’s Foods. The Hispanic segment is the fastest-growing segment of the American population, and the company is growing along with it. Amigo’s Foods is in the process of opening another warehouse focused on cold storage in Chicago, and it plans to open another distribution center in Dallas this summer. “I think the future looks bright,” Hurtado says.