Back to Profile Gallery > Anchor Bar 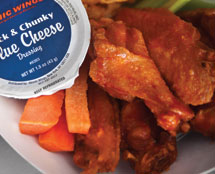 He decided to leave his successful career as a commercial real estate broker and to try to fill this void. He took series of trips to Buffalo, N.Y., where he asked locals about their favorite Buffalo wing spots in town. Lippin soon began training under the veteran staff of the famous Duff’s, which was a favorite spot for Buffalo residents. He also befriended the owner of the Anchor Bar – which is credited with creating the signature Buffalo wing.

Lippin opened his first location in New York City in 1989 in the kitchen of a bar called Name This Joint. The wings were an instant hit, and Lippin rolled out his concept to four other bars through 1994.

By 1994, however, Lippin was burned out. He sold Atomic Wings to his general manager and immersed himself in the yoga culture, making numerous trips to India and began teaching throughout New York City. However, when the concept began losing money, Lippin bought his business back with a renewed sense of how he wanted to drive the growth of the business – franchising.

Lippin started the franchising process in 2006. Today, there are 14 full and fractional franchise locations, and Lippin wants to boost that total to at least 25 by the end of 2012.

Lippin understood that his idea would have to prove great to compete in the most demanding restaurant market in the world. However, more than 20 years after its first location opened, Atomic Wings remains one of the most recognizable Buffalo wing brands in New York City.

“We keep on despite this most demanding market,” he says. “The market has gone from Chinese to Thai to Vietnamese. Throughout all the trends, the recession, the boom market or whatever the thing of the moment is, we’re the tried-and-true Steady Eddie here.

“So, I decided to take advantage of what I’ve built, honor it and open it up to the market out there.”

Atomic Wings has partnered with US Foods, a nationwide distribution company, which is now the primary distributor of its proprietary products. Atomic Wings uses the resources from this major organization by leveraging its sales force and buying power to decrease costs.

“US Foods has proven to be a valuable and reliable partner in this venture,” Lippin says.

Fractional franchisees get a branded wing program and the benefits that come with along with marketing support, proprietary products and training that full franchisees get as well without having to give up their existing business model. Also, this model is available at a much lower price than full franchising license.

“We always received a lot of calls from existing places, but we didn’t have a model for how to do it,” Lippin says. “This gives an avenue for individual business owners to add a well-known brand extension, and they don’t have to change what they’re doing.”

Spreading its Wings
Atomic Wings plans to continue growing throughout the tri-state area of New York, New Jersey and Connecticut. Within three to five years, Lippin expects to have 100 Atomic Wings locations throughout the East Coast.

“In the next year or two, we want to become a stronger regional brand by growing primarily through franchising and fractional franchising,” he adds.

Lippin says his wings stand the test of time by staying true to a commitment to quality. “We have an amazing product – you can’t survive in New York City without a great product,” Lippin says. “If you start putting out a bad product, you won’t last.”