Back to Profile Gallery > Andrea Foods 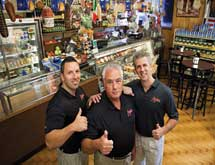 The story of Andrea Foods features all the nuances of the great American dream. Since its founding in 1964 as a small neighborhood “salumeria,” or Italian delicatessen mak­ing homemade pasta products, the company has since grown into a manufacturer with a distribution area that covers the entire New York metropolitan area and continental USA along with international private labeling.

Andrea Savignano was born in Pescopagano, Italy, and moved to New York with his childhood sweetheart turned wife, Dora, in Novem­ber 25th 1948. The couple opened Andrea Foods in 1964 and incorporated in 1977 when demand for their products grew. The couple’s son Mike Savignano is the president of the company today.

Since its founding, the company has acquired state-of-the-art machinery for production and quick-freezing pro­cesses in order to serve customers with optimum efficiency and quality, the company says. Today, its offerings include a variety of pasta products, including ricotta cheese-filled ravioli, manicotti, stuffed shells, ricotta Cava­telli, tortellini, and potato gnocchi, and lasagna. More recently, the company added a gourmet pasta product line, which includes four-cheese ravioli, spinach and roasted garlic ravioli, Cavatelli with broccoli and Portobello mushroom with burgundy wine ravioli.

The company distributes its products to foodservice and grocery clients throughout the New York metropolitan area and abroad. It says that all of its products are available in foodservice or institutional packs. It currently manufactures a full line of institutional products for establishments including restaurants, pizzerias, co-packing for other industries, and schools. The company also offers private labeling and custom packaging for distributors and high-volume users.

Andrea and Dora’s son continues the dream and is just as dedicated to manufacturing for consumers a quality product at, “a fair price,” according to the company.

“This dedication to quality and value has been the key to the success of Andrea Foods as well as the loyalty of its customers who recognize its efforts,” the company says.

Andrea Foods sells its wares through its own gourmet Italia specialty deli, located at its facility in Orange, N.J. The shop features a variety of homemade and imported Italian delicacies, as well as many homemade Italian pastries.

“Whether you are looking for our frozen pasta products or a special imported or homemade Italian specialty, [we] won’t disappoint,” it says.

In 2003, Andrea Foods was visited by President George W. Bush while he toured New Jersey to promote his tax reforms. The company says during his visit, he met with the Andrea Foods family and employees.

“We would like to thank President Bush for visiting our company,” the company says.

“It was a great honor to meet him and also to hear him speak to the New Jersey Business Community at the Wyndham Hotel following his visit with us. Words can not describe what a memorable event it was for us.”