Back to Profile Gallery > Anestasia Vodka 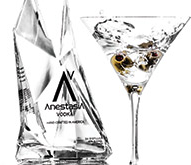 The spirits market is as subject to trends as any other consumer product, and for a while, it was flavored vodkas – and not just fruit flavors, but even ones usually found on top of desserts. Now that trend has passed, and Anestasia Vodka is emphasizing its smoothness.

“Originally, we launched Anestasia Vodka as a so-called Sensational Spirit,” CEO Yuliya Mamontova explains. “It was a flavored vodka. It had a numbing effect, and many consumers described it as a vodka having a cooling effect of a menthol, but without a minty taste. After about a year on the market, we reformulated the original Sensational Spirit and relaunched a non-flavored version of Anestasia Vodka.

“What makes the current Anestasia Vodka unique is the smoothness of the vodka combined with a sweet finish,” she continues. “If you take most vodkas on the market, you can really smell the alcohol because vodka is not aged as other spirits are in barrels. There’s no flavor of juniper berries like gin. The tricky thing in vodka is to make a vodka that doesn’t shock you with a pronounced alcohol taste and smell, and that’s what makes Anestasia Vodka unique.”

That and the bottle, a stunning, sculptural design in recycled glass that looks as if it were chiseled out of a block of crystal-clear, Arctic ice. Even consumers with a poor memory for names will remember the award-winning bottle designed by Karim Rashid.

Craft Market Growing
Although the trend of flavored vodka has subsided, the market for craft spirits is rising. “Around the world and the U.S., the specialty vodka market is still growing and growing rapidly,” Mamontova observes. “So there’s definitely space for more vodkas here in the market, and that’s what our sales have shown, especially for crafted, more small-batch domestic and super-premium spirits. People tend to lean toward more quality products and appreciate a better-quality vodka.”

Not that Anestasia Vodka is out of reach of the average consumer. On the contrary, Mamontova places it in the premium but not super-premium category. It is distributed in approximately 25 states and 12 countries. “We’re approached on a daily basis by interested distributors and importers who want to distribute in their territory,” Mamontova asserts. “A lot of entrepreneurs and capitalists are attracted to the vodka business because you don’t have to age vodka. You just make the distillate – the mash – fermentation takes a couple days, and then there’s a distillation process. So it’s pretty fast.”

This enables Anestasia Vodka’s contract distiller – which makes its own and several other brands – to ramp up production quickly and provide additional production capacity. The simple ingredients – corn, yeast and Cascade Mountain water – and the filtration are the major production inputs. “We use crystal filtration,” Mamontova notes. “It adds to the overall smoothness of the vodka that is produced by the filtration.”

Marketable and Desirable
Between Anestasia Vodka’s smoothness and its bottle, it practically markets itself. “The beauty of this particular product is that the marketing is pretty embedded into it, especially in the design of the bottle,” Mamontova says. “It’s easily marketable and easily desirable, so luckily, we haven’t been doing that much marketing to achieve the sales that we have. We do the basic stuff – we sponsor events and do social media and reviewers’ articles – but nothing like a major celebrity endorsement or huge billboards everywhere. We do wrap some trucks with ads, but really on a minimal scale.”

Once tasted, Anestasia Vodka pretty much sells itself, Mamontova declares. It was rated a 94 out of 100 by the Beverage Testing Institute’s judges, which Mamontova calls “prestigious and exceptional. The vodkas we were competing with – we topped them all. Many premium vodkas were rated much below ours.”

Mamontova plans to expand distribution of Anestasia Vodka through distributors that have a strong commitment to it. “From my experience, the mid-size distributor is the best,” she declares. “They have a footprint and the retail space, bars and the rest, but they don’t have that big a portfolio that we can get lost in. Big distributors have so many brands in their portfolio that they won’t be able to pay attention to you. A small distributor can give you tons of attention and be very passionate about you, but they don’t have that much of a distribution network. They don’t have relationships with retailers.”

Mamontova is a third-generation vodka producer – her mother is from Ukraine and her father from Russia – so Anestasia Vodka is made in America with skills and know-how developed in eastern Europe. “People know how to make good vodka in Ukraine,” she emphasizes.