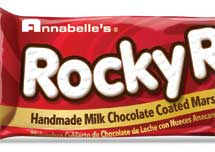 In many ways, California-based Annabelle Candy Co. is a throwback to times long gone. Before massive candy companies, smaller regionals dominated the landscape. Although many have ceased operations or been acquired by competitors, Annabelle Candy has found a niche for itself in the western United States and is now embarking on a journey to broaden its reach.

Sam Altshuler, a Russian immigrant who came to the United States in 1917, founded Annabelle Candy in 1950. The company found its footing with the Rocky Road candy bar, a handmade chocolate-covered marshmallow treat with roasted cashew nuts and crunchy malt. It remains the staple of the company and is among the 40 top-selling chocolate bars on the West Coast.

After Altshuler passed away in 1971, his daughter and company namesake, Annabelle Altshuler Block, took the reins. Annabelle’s son, Gary Gogol, managed the business for a while. Now her daughter, Susan Gamson Karl, is president and CEO. Based in Hayward, Calif., Annabelle Candy is family owned and operated and is one of the nation’s largest independently owned candy bar manufacturers.

“Our facility is 60,000 square feet and we have about 60 employees,” Karl says. “Our people are loyal and stay with us for a long time. We are strong in the western part of the country and have footholds in other parts of the country. It is a challenge to compete with giants, but we have taken on an eastern regional sales manager and have broadened our distribution.”

Annabelle Candy followed that up with the acquisition of the Cardinet Candy Co. in 1978, which made U-No and Abba-Zaba candy bars. Abba-Zaba is thick, rich chewy taffy with a rich creamy peanut butter filling in the center. U-No has a smooth, rich, chocolate truffle-like center with crushed almonds, covered with creamy rich milk chocolate.

Although the company hasn’t launched new brands, it does bring out new versions of existing brands on a regular basis. In 2008, it launched two king-size Rocky Road-inspired bars, Supreme Mocha and Supreme Peanut Butter, which have since been retired. Members of the Abba-Zaba family have included Chocolate and Sour Apple versions. This year, the company brought out a new line of Abba-Zaba with strawberry taffy and a Rocky Road S’Mores bar, both showing early signs of success.

Annabelle Candy has stayed true to the original formulations of its product line, a lot of which requires a great deal of handmade manufacturing in the process. This is the case because the company doesn’t want to compromise the quality it has become known for.

“We’re not like plants that have everything computerized and automated,” Karl says. “Our facility handles manufacturing and distribution. We’ve upgraded machinery in smart and economical ways. Slightly used equipment will work well for us. We are also very conscious of earthquake safety and retrofitted the building for that. In addition, in 2011, we installed solar panels on our roof, and about 95 percent of [our] electricity is powered by solar.”

Tapping New Markets
Annabelle Candy distributes product through a network of brokers. Along with Karl, the company’s director of sales, director of marketing and eastern regional sales manager work with brokers to establish and maintain good relationships. The company’s facility has enough capacity to support growth as its products expand their footprint.

“We will never compromise the quality and service we give to current customers,” Karl says. “But we can meet the manufacturing needs as we get larger by doing more shifts, and maybe opening another facility if needed.”

Karl has a positive outlook on the future. The eastern regional sales manager has only been on board for about a year and the company has already taken on many new customers in the East and Midwest. The company also wants to go international, having taken on a broker that sells to South Korea.

In addition, the company has an interest in expanding into Latin America. Its products are already available in Mexico in Costco, and its sales team recently attended a candy show in Mexico City and plans to attend another in the city in July.

Annabelle Candy won’t rule out product expansion through either acquisition or new brand development. Although it competes against large companies, it is confident that product quality will carry it to new heights.

“I see a period of good growth in the future because there are a lot of untapped markets for us,” Karl says.