Back to Profile Gallery > Annabelle Candy 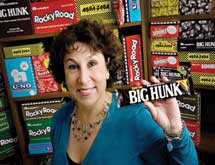 If you were lucky enough to grow up in the western United States, you may have had the opportunity to sample one of the delectable candy bars handmade by the folks at Annabelle Candy. Since 1950 – when candy bar creator Sam Altshuler introduced his first creation, Rocky Road – Annabelle Candy has expanded its sweet offerings to include additional candy bars.

“My grandfather actually began making the candy bars in his kitchen and selling them from a push-cart outside of movie theaters before they had concession stands,” President and CEO Susan Karl says. “I used to visit my grandfather at his factory when I was a little girl.” He wisely instilled his love of candy making into his daughter and the company’s namesake, Annabelle Altshuler Block, who took over operations in 1971. Currently, the family’s the third generation, including both Karl and her brother, Gary Gogol, have ushered Annabelle Candy into its sixth decade.

The company’s flagship candy bar is Rocky Road, which has a marshmallow center topped with roasted cashews and crunchy malt, all covered with milk chocolate. Two additional versions are available in dark chocolate and mint dark chocolate.

“All Rocky Road candies are hand-made in small batches,” Karl asserts. “There is a unique swirl on each bar made by skilled candy makers to give each bar its own personality.” She adds that the company takes pride in its signature marshmallow recipe. “Our marshmallow is especially light and fluffy – no one makes marshmallow like Annabelle Candy.”

In 1978, Annabelle acquired the Cardinet Candy Co., makers of the U-NO and Abba-Zabba candy bars. U-NO features a choc­­olate truffle-like center with crushed almonds that is covered with milk chocolate. Abba-Zabba is made of chewy taffy and filled with peanut butter. Other versions include Abba-Zabba Choco­laty Center and Sour Apple.

Karl believes one of the major reasons the company has remained successful is that it has kept true to its original recipes and hasn’t wavered in maintaining a high standard of quality in the ingredients it uses. “In looking for suppliers, we’re always very careful that the ingredient we use matches or exceeds the taste standards we’ve set,” she claims.

“There is a psychological aspect to how we remember a candy bar from childhood,” Karl explains. “When a child eats a candy bar, there is a sense of wonder when that person becomes an adult, he or she may lose that wonder if the candy doesn’t taste the same.” This is one of the main reasons why the company hasn’t varied from its hand-made production processes or anything that will affect the candy’s flavor. “One thing we are changing is the packaging to give the candy a more modern look,” Karl says. “But we’re not changing anything that goes inside the candy itself.”

“The Rocky Road is still made by laying the marshmallow out by hand,” Karl says. “The chocolate and cas­hew topping is also layered on the marshmallow by hand.” She adds that Annabelle’s brand is very unique. “For instance, no other company makes a candy bar like Abba-Zabba – a taffy bar that’s filled.”

Dave Klabunde, director of marketing, adds that other companies have met with drastically decreased sales when they deviated from their original recipes. “In an effort to save costs, one company used a coating for its candy bar that looked just like the original chocolate coating, but it didn’t taste the same, which resulted in a sharp decline in sales,” he says. “Though the candy’s still available, it’s not nearly as popular as it once was.”

At one time it concentrated its efforts only in states west of the Mississippi, but today Annabelle Candy is working with other vendors to extend its distribution channels farther to give consumers across the United States a chance to become fans of its unique confections. “We want to increase our national distribution channels, so we’re looking into grocery and drug store chains, and even some of the bigger box stores to sell our products,” Klabunde says.

Karl claims that another area of the company’s success lies in its quick response to its customers. “We receive e-mails and letters from consumers which we respond to immediately,” she says. “If there is a complaint about a product, we investigate it right away to make sure the issue doesn’t arise in the future.”

Additionally, the company also tries to accommodate its vendors’ display and packaging needs. “A vendor may request a unique display for a store,” Karl says. “We’ll work with our display techs who will design something different.”  Or, if a customer sells more of one particular candy bar, Annabelle will try to customize a shipper pack just for that particular vendor.

Toward the future, Karl says she will take advantage of new media outlets such as Annabelle’s E-Club, which is in devel­opment to get input directly from consumers. “We’re considering getting con­sumer input to come up with a new version of the Abba-Zabba bar,” she says.

“One thing about candy,” Klabunde notes, “even in a bad economy, it’s still an affordable treat.”