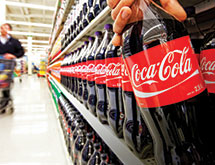 Four years after Arca Continental was formed from the merger of Latin America’s two most important players in the food and beverage industry, the company continues to follow an active growth strategy that has helped it gain marketshare, add new products and improve its operation. “Arca Continental has established itself as a platform for profitable and sustainable growth,” the company says.

Embotelladoras Arca and Continental Group joined forces in 2011 to form a single company based in Monterrey, Mexico.

Today, Arca Continental is the second-largest Coca-Cola bottler in Latin America. The company produces, distributes and sells non-alcoholic beverages under The Coca-Cola Co. brand in Mexico, Ecuador and Argentina.

Arca Continental also produces and distributes salty and sweet snack foods in Mexico under the Bokados brand, as well as in the United States under the Wise Foods brand and Inalecsa in Ecuador.

Through its joint venture in Jugos de Valle, and in partnership with The Coca-Cola Co. and other bottlers of Coca-Cola in Mexico, Arca Continental began distributing dairy products in 2012 throughout the country. In 2013, Arca Continental acquired a significant stake in Nogales bottling plant in northern Mexico, which was adjacent to its territories and helped improve its capabilities of distribution and operation in the area.

Today, Arca Continental operates 22 bottling plants and 115 distribution centers that allow it to serve nearly 53 million residents throughout its territories. At the end of third-quarter 2014, Arca Continental reported 14 consecutive quarters of growth.

“Our proven capability of execution at the point of sale, the continuous search for efficiency in our operations and the absolute commitment of our team to confront a challenging consumer environment, have been key factors in maintaining a sustained growth trend in the competitiveness and profitability of the company,” CEO Francisco Garza Egloff says.

Dedicated Service
Arca Continental is focused on improving its customer satisfaction and decreasing its serving costs. To do so, the company implemented what it calls a Route to Market system that allows it to optimize the marketing and distribution of its products for each type of customer through micro-segmentation of the market.

The company prides itself on being innovative when it comes to its service models, and recently developed what it calls a direct-to-home program. Arca Continental delivers products from its portfolio of beverages, which includes soft drinks, non-carbonated beverage water jugs and Santa Clara dairy products, directly to the home of more than 600,000 customers in its direct-to-home program.

“As for the portfolio, we continue serving the dynamic needs of consumers through our high-quality products and great taste that satisfies their different occasions of consumption based on their lifestyles,” the company says.

To strengthen the bond between Coca-Cola and its consumers, last summer Arca Continental took part in Coke’s “Share a Coke” campaign. Millions of cans were produced with the names of purchasers in Arca Continental’s market and distributed with its own creative spin, but preserved the simple invitation to “Share a Coke with (insert name).”

Arca Continental is also getting consumers’ attentions by launching new products and offering a wide and solid price-package structure, which allows the company to offer the best combination of price, product and packaging for every consumption opportunity. This packaging structure boosts the use of returnable packages that help maintain affordability of the entire portfolio.

In 2013, Arca Continental launched Coca-Cola Life in Argentina and last year in Mexico, which is a low-calorie option naturally sweetened with sugar and Stevia.

Operational Excellence
All of Arca Continental’s achievements were made possible because of its efficient production plants, which are focused on quality and continuous improvement, as well as safety for its employees and the community. Two of the company’s manufacturing plants were the first of all Coca-Cola manufacturers to be certified as reference centers for Operational Excellence.

Arca Continental’s South America business unit is improving its plants to meet increased demand. Its plant in Argentina installed a new production line: Hot-Fill, which will meet the growing demand for beverages in the country allowing the company to increase its production. A new bottling plant is under construction in the province of Machachi in Ecuador that will be built under the highest standards of quality and sustainability.

Sustainable Measures
In 2014, Arca Continental was recognized for its 11th consecutive year as a socially responsible company by the Mexican Center for Philanthropy. “As part of the business strategy of Arca Continental we have advanced our goals of sustainability and social responsibility consistently in all territories in which we participate,” Corporate Communications and Social Responsibility Director Guillermo Garza says.

This year, the company plans to reduce its carbon footprint and become more energy-efficient by adding wind turbines to its operations in Mexico, for example. “We will be integrating 36 percent of the energy we consume in Mexico from renewable resources,” Garza says.