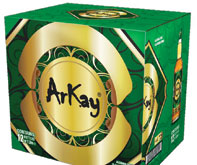 At cocktail parties, designated drivers, teetotalers and pregnant women often are limited to drinking soda, water or juice – options that can become incredibly monotonous. A new beverage in the market is about to shake things up and open a world of possibilities, giving everyone a chance to enjoy all the flavor of whisky with none of the alcohol, calories, sugar or sodium.

ArKay is a whisky-flavored beverage, which means it tastes like whisky, looks like whisky, smells like whisky, but has never been fermented or aged in a wooden cask and contains no alcohol. This version of the popular spirit is ideal for anybody who – for personal, philosophical or religious reasons – cannot drink alcohol or simply doesn’t want to indulge.

Imbibing Responsibly
The scotch-flavored drink was developed in Switzerland after five years of intense research and a $5 million investment. Currently, it is the only product of its kind in the world. Owner and President Reynald Grattagliano wanted to create a different drink for people who like spirits but cannot drink alcohol, whatever their reason might be.

Jean-Paul Benizri, vice president of U.S. operations, explains how the appeal of this beverage is truly versatile. “The way you can use ArKay is quite unique,” he says. “When you drink it, it’s like you are drinking whisky, and if you mix it with cola, it’s just like a whisky-and-cola mixed drink. People like it because they can drink as much as they want without getting drunk.”

Benizri admits that serious whisky drinkers will not be drawn to ArKay. “This is not for scotch drinkers that enjoy having an 80 percent-proof drink,” he admits. “This will not satisfy them because our product has no alcohol. You don’t get the buzz that you get from alcohol, but you get the same taste in your mouth. That is why it has become so successful for people who have been drinkers and won’t drink anymore, or for those who cannot drink for whatever reason.”

International Growth
The product was introduced to the public three years ago and has experienced consistent demand.

“We soon realized it would be a huge success because people were not only ordering, they were re-ordering – a sure sign they liked the product,” Benizri explains. “The demand has been tremendous, first from consumers through our website and then from retailers. Stores like 7-Eleven, major grocery stores and large chains such as Walmart are interested in this product because of its non-alcoholic content.”

ArKay is distributed in more than 27 countries. “We have requests from Japan, from Thailand, South Pacific islands and Nicaragua – from all over the world,” Benizri explains. “We just signed up a distributor in Russia who will cover Russia and several other Eastern European countries, such as Latvia and Ukraine.

“Our product is going to be all around the world because we are creating something that nobody has ever done be¬fore,” Benizri continues. “We have given people an alternative that did not exist before.”

Steady Growth
Although the company has only 12 employees in its headquarters in Fort Laud¬erdale, Fla., it occupies a 5,000-square-foot office space in anticipation of its imminent growth. Benizri is setting up a network of major distributors covering the entire United States, from Hawaii to Maine.

“We are available in several states, and we are expanding and signing contracts with nationwide distributors,” Benizri ex¬plains. “We want distributors who carry soft drinks, beers, even alcohol distributors – anyone with enough presence in the market.”

Grattagliano has planned this growth carefully over the last five years. “Our CEO was waiting to put the right people in the right place,” Benizri explains, who himself is a 15-year veteran of the beverage industry. “We wanted to be able to launch our product in a professional way, to give it the look and feel of a very real beverage company. We are not a gimmick launched by marketing people – we have a solid product.”

“We’ll introduce mixed drinks, starting with ArKay Cola and extend it from there,” Benizri says.

ArKay is also looking to venture into developing alcohol-free versions of other popular spirits. Once its whisky-flavored beverage has a solid distribution and presence in the market, ArKay will introduce al-cohol-free vodka, rum and tequila, making it a bit easier for everyone to enjoy margaritas, vodka-cranberries and gin and tonics with all the flavor and none of the alcohol. These new additions to the company’s offerings will allow everyone to drink re¬spon¬sibly while still having fun.