Back to Profile Gallery > Arooga’s Grille House and Sports Bar 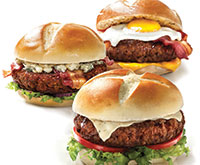 Arooga’s Grille House and Sports Bar is the place to be in Pennsylvania for the big game, date night or night out with friends. “We are a non-traditional casual sports bar with a focus on quality food and offering a great value to our guests,” Co-Founder and President Gary Huether Jr. says.

The Harrisburg, Pa.- based company was founded in 2008 by Huether and Mike Murphy and offers a diverse menu. The highlights include fresh antibiotic and hormone-free Kobe/Wagyu burgers, its signature Maryland Crab stuffed pretzel cheesesteaks, salads and flatbread pizza, but the restaurant is best known for its extra large wings, Huether says.

Arooga’s offers more than 100 signature sauce combinations, as well as bone-in, boneless, “skinny” and twice-baked wings. “Our food sets us apart,” Huether says. “Our menu is unique and we focus on fresh, never frozen.”

Guests also are enticed by the wide selection of sports available on more than 100 televisions in each of its nine locations. “It’s a sports bar on steroids,” Huether jokes. “We are able to compete with casual dining during the day, local bars in the evening and, when you want to watch sports, there is nowhere else to watch sports other than Arooga’s.”

“We are excited to announce this agreement with the Mohegan Tribe,” says Keith Swade, franchise development. “They are a world-class organization and a leader in the hospitality and gaming industry. We could not ask for a better partner to develop the New England market for Arooga’s.”

Construction on the brand’s first franchise restaurant began the summer of 2014 and is located adjacent to the Mohegan Sun in Uncasville. “We are thrilled to bring this incredible sports bar concept to the New England area,” Chairman of the Mohegan Tribe Kevin Brown says. “Arooga’s reputation for being the next great restaurant franchise is well-earned and we are privileged and pleased to have them as an important part of our organization.”

Appealing Additions
Arooga’s new Buzztime tablet features a seven-inch touchscreen. The tablets are connected to a network that delivers single or multiple player games, such as trivia and Texas Hold ‘Em, and are pre-loaded with more than 25 arcade games for guests.

The tablets allow for a more customized dining and entertainment experience at Arooga’s. “Technology is important and the millennials embrace it,” Huether says. “The tablet will attract guests to us. We do see that when people are involved in the games, they stay longer. That means extra food or an extra beer.”

Arooga’s will be releasing a new menu in third-quarter 2014. “Organic and all-natural is the next step and these aren’t traditional options at a sports bar,” Huether adds.