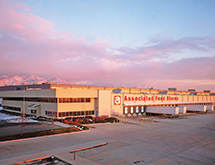 As a member-owned business, grocery wholesaler Associated Food Stores operates as a cooperative. With no stockholders, the company is free to prioritize the needs of its customers. “I’m most proud about what we as a company do for the independent grocery store operator,” Vice President Bob Obray says. “Everything we do is for the benefit of our member-owners.”

For the past 75 years, Utah-based Associated Food Stores’ mission has been to strengthen and support its independent members. The wholesaler now services nearly 500 stores, including 42 corporate-owned locations that are part of Associated Retail Operations, a subsidiary company. Associated Food Stores’ independent members are found in Oregon, Idaho, Wyoming, Montana, Colorado, Utah, Nevada and Arizona. The average store is 40,000 square feet, but Obray says its members range in size from as small as 5,000 square feet up to 80,000 square feet.

However, Obray says maintaining the separate brands creates some redundancy in marketing and makes efficiency more difficult. “There is really not a lot of overlap when it comes to the different brands in different markets,” he says.

Supporting Members
For Associated Food Stores, meeting its members’ needs is about much more than simply being a wholesaler. “We do much more than just sell product,” Obray says. “The entire concept that we operate on is we can provide not only product, but services that are more tailored to [customers’] operations than others. We feel like we can do it at a better price, also.”

Associated Food Stores achieves those goals by using aggregation to leverage the size of its customer base. Through economies of scale, the company provides a number of ongoing services to its members, including retail pricing, marketing, technology, retail accounting and assistance with schematic designs.

Each independent member has its own way of thinking and doing business. To most efficiently serve its customers, Associated Food Stores standardizes processes and operations wherever possible. Installing the same front-end systems or implementing similar loyalty platforms across its network streamlines those services.

Its efficient supply chain helps Associated Food Stores streamline its operations, too. The company has two distribution centers. The primary one is a-1.3 million-square-foot facility about 45 miles north of Salt Lake City in Farr West, Utah. The building is a former Rite Aid facility that Associated Food Stores acquired and expanded into a state-of-the-art distribution center.

The Farr West center serves all eight states in the company’s market and ships an average of $4.6 million in product each day. “We move product all the way to the northern border of the United States out of that facility,” Obray says.

Many products are ordered and delivered to customers by the next day thanks to Associated Food Stores’ in-house fleet of more than 100 trucks. That speed has become critical to competitiveness. Products that were once handled by outside distributors, such as organic foods, are now in high demand and must be quickly moved through the supply chain. To keep up with those trends, Associated Food Stores constantly reviews its SKUs and makes sure its warehouses have the right products inventoried. “As the mix changes, the product in the grocery store changes,” Obray says. “We have to move faster and adapt.”

The category management department of Associated Food Stores is responsible for managing those brand relationships and acquiring new products for member stores. By reviewing customer feedback and market data, the category management team seeks out the products that are available and matches them with consumer wants. It’s not a depth of selection Associated Food Stores is ultimately after, but rather quality. “We can operate at a level well above some of the value-type operators,” Obray says.

Associated Food Stores is reinforcing that commitment to quality through its development of “groceraunt” offerings in corporate and member stores. The groceraunt concept was created to sell fresh-made items that can compete with restaurant meals, such as oven roasted chickens and other ready-to-eat offerings.

Groceraunt products are becoming increasingly popular with customers looking to pick up a complete meal on their way home from work, Obray explains. “I think you’ll see in the grocery store industry more of a move toward groceraunt,” he predicts.

Although such concepts have been a hit with consumers, Associated Food Stores is not ready to bring those offerings to new territories yet. Instead, the company wants to grow into new markets within its existing footprint. Ideally, Obray says the company’s independent members will spearhead that growth.

Associated Food Stores identifies prospective locations and then works with members to explore an opening. “Our first priority is to see if we can get a member to build a store on that site,” Obray says. If not, then the company will entertain a new corporate-owned location, such as the one under construction in St. George, Utah – Associated Food Stores’ second store in that market.

New locations aren’t the only area where the company provides assistance. Associated Food Stores also helps its members expand and remodel their existing stores to provide better service and new products to shoppers. Investing in customers helps them generate more business and ultimately increase demand for Associated Food Stores’ products. “We’re only as strong as our retail customers,” Obray says. “The more they grow, the more we grow.”