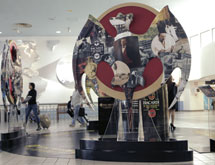 The days when Joe the bartender would slosh a little whiskey in a glass with ice and cola and call it a cocktail are long gone. Today’s mixologists are lionized like the latest top chef, and their creations gain the attention formerly reserved for main entrees – which their price tags can resemble.

Nurturing this cocktail culture are the premium brands of Bacardi U.S.A. Inc., the United States import and distribution arm of Bacardi Ltd., the largest privately held spirits company in the world. Leading brands include Bacardi rum, Grey Goose vodka, Bombay Sapphire gin, Dewar’s blended Scotch whisky and Cazadores tequila, among others. Founded Feb. 4, 1862, Bacardi celebrated its 150th anniversary with parties worldwide in February. The company’s biggest promotional extravaganza celebrating its 150th anniversary was tied in with the one of the world’s biggest events, the Super Bowl.

Bacardi kicked off 150th birthday parties for consumers from Berlin to Miami with celebrities and VIPs. Magazine publisher Conde Nast hosted a commemorative event for Bacardi rum in New York. The Bacardi 150th anniversary festivities will continue throughout 2012 as Europe, Latin America, Asia-Pacific and the Middle East host their own celebrations.

“Hosting the best parties – that’s what Bacardi has always been about,” insists Guillermo Rodriguez, vice president and managing director of Bacardi’s largest U.S. business unit. It covers distribution and sales in 14 markets, including New York and Florida, two of the nation’s largest for spirits sales. “The best party starts with Bacardi,” he adds.

More Variety
In its seventh generation of family ownership, Bacardi employs nearly 6,000 people worldwide, manufactures its more than 200 brands and labels at 27 facilities in 16 markets on four continents and sells them in more than 150 countries. “We compete in rum, vodka, tequila, scotch and gin – all the five major categories in spirits – around the world,” Rodriguez notes. “Our brands are really the leaders in their respective categories.”

Acquisitions and innovation at Bac¬ardi is consumer-driven. “The consumer today is changing a lot quicker than as recently as five to 10 years ago,” Rodriguez observes. “Maybe 20 years ago, you could count on one hand, maybe two, the number of mega-brands that really drove the industry. You had five to seven brands that probably did the overwhelming majority of the business in the United States. Today, that is very different.”

Differences in demographics contribute to that variety. “We’re constantly looking at the consumers, where they are going even outside spirits,” Rodriguez adds. “Soft drinks, food, condiments and flavors play a big role for the consumer today. People really want new things and constantly want to be trying new products.”

Bacardi’s responses to this variety-seeking culture include its 1995 introduction of Bacardi Limón, the first flavored rum, which when introduced was hailed by the industry as the most successful new spirit launch of all time. “Today, Bacardi Limón is still the leading flavored spirit brand in the United States,” Rodriguez points out. “When you focus down to the consumer and what they’re looking for – and if you’re willing to understand that you’re not creating products that are for everybody, but really targeted products for a certain segment of consumers – it allows you to understand what consumers are looking for and make a premium product that really is a longer-term build. That allows you to focus in on the consumer and build a lifelong relationship versus an in-and-out product that is here today and gone tomorrow.”

Bacardi’s brands are here for the long-term, Rodriguez declares. “We understand we can’t be all things to all people, but we do understand how to reach our customers,” he notes. “The companies that have 25 different flavors in one brand, as an example, are companies that are trying to establish a relationship with the consumer, where we feel we already have iconic brands – we need to enhance that relationship with the consumer.”

High-end Mixology
Unlike some competitors, Bacardi focuses more on the high-end brands. “We think that is our playground, if you will,” Rodriguez remarks. He says the company builds relationships with trend-setting mixologists who use its products behind the bar, so when consumers want the same cocktail at home, they reach for those same super-premium Bacardi brands.

The distributors’ sales forces frequently train several mixologists in one market or do it bar-by-bar, Rodriguez says. In one case, Bombay Sapphire gin sponsored a search for the most imaginative bartender in the United States, which was featured in GQ. “Through the program, the United States Bartenders Guild and GQ brought bartenders together for a mixology summit where bartenders received training and showcased their talents creating new and inspired Bombay Sapphire cocktails,” Rodriguez relates.

The company’s distributors promote Bacardi’s brands based on what their individual regions and states allow. “We do have promotional teams that, where legal, do promotions in bars and restaurants,” Rodriguez explains. “The on-premise promotions are the best vehicle for people to try our products.”

Customers will receive a small sampling cup of the cocktail of the evening that features a Bacardi product, with the ultimate goal of making the consumer a believer in the brand. “For us, we see it as an investment,” Rodriguez notes. “It comes down to the amount of people you can touch and how effectively you can touch them. On-premise promotion is something we do very regularly. It’s key because it drives consumer choice in off-premise retail stores. We believe the on-premise is one of our strengths because of our iconic brands and legendary cocktails. We believe the quality of our cocktails will always win out.”

Started Young
Rodriguez started with Bacardi in April 1994. “I grew up in South Florida, and Bacardi is really an icon as far as the industry goes here,” he recalls. Bacardi was founded in Cuba but has had a long presence in South Florida since 1964. That was when it moved its U.S. headquarters from New York to Miami following the Cuban revolution and the exile of many Bacardi family members and employees to Miami.

“Bacardi was the company that you always knew somebody who worked for if you spent any time in Miami,” Rodriguez remembers. He had what he calls the “unique opportunity” of applying for a position with Bacardi in Boston. “Two days later, I was on an airplane flying to Boston for an interview,” he says. He started in the lowest position in the company at that time – a merchandiser and sales representative.

“I started up in Boston and did that for a few years,” he relates. “I really learned how our industry worked at retail. That was the retail training ground for the company at the time.” From there, he moved to Los Angeles and was responsible for running the northern part of Southern California from Santa Monica to San Luis Obispo. Then he became a district manager in San Diego.

“In 1998, I had a desire to go international, and I had what was probably the most incredible professional experience of my life,” Rodriguez recounts. He moved to the Dominican Republic and brought along two brands Bacardi acquired – Dewar’s and Bombay Sapphire – in June 1998. He opened Bacardi’s wholly owned distribution company in the Dominican Republic, which he says was a huge success.

Rodriguez became the commercial director responsible for sales and marketing there, and in 2001 moved to Puerto Rico, where he was vice president of sales and operations for Bacardi’s Caribbean company. “When you think about Bacardi, you think about the Caribbean,” Rodriguez says.

The Best People
Rodriguez believes in building a good team. “You learn that you’re really only as good as the people you surround yourself with,” he emphasizes. “You have to surround yourself with the best people. What that means can be different for different positions. It’s not just the smartest man or woman – it’s personality, it’s intelligence and it’s personal accountability that drives success in our company.”

As a manager, Rodriguez believes in treating everyone on his team fairly but not necessarily with the same management style. “The way I might treat them will be a little different based on what motivates them and what they respond to,” he asserts. “For the person who is delivering and going the extra mile, the best way to be fair to them is to make sure that the person who is not delivering is held accountable.”

A Second Family
Rodriguez emphasizes that Bacardi employees are like a second family. “Although it is an extremely competitive environment, it also is a very nurturing one,” he maintains. An example of this is the mentoring he received from the then-CEO of North America. “He used to bring in all the new employees to see him, no matter what their position,” Rodriguez remembers. “He used to bring you in before your first day. He called me in his office and gave me a little bit of a speech regarding the company, how it really is a privilege to work at this company and how important it is to value that.”

He then made Rodriguez an offer. “[He said,] ‘I’m going to give you a tool that will be the most important tool you ever use in this industry and that will teach you the most about how to be successful in this industry,’” Rodriguez recalls. “I was a young man about 24 years old, and I was wondering what this tool was going to be. He pulled out of his desk a branded box cutter, which I still have to this day. ‘This will help you learn what moves the consumer,’ he said. ‘Get out there, get in the store, cut boxes and build displays, and you’ll learn what this industry is all about.’ That was one of the best mentoring moments I’ve had in this company. His name was Juan Grau, and he retired many years ago.”

Rodriguez says he spent the first two years of his career cutting boxes. “Since then, I get out quite a bit and love to be in stores and love to continue to have that direct contact with the retailers,” he says.

“This is not a 9-to-5 job,” Rodriguez emphasizes. “When you work for Bacardi, you really get passionate about the brands, and you become very loyal to the brand and the company. It really becomes part of you. Very few people go home at 5 and forget about it.”