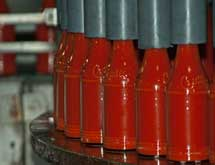 After working for years to establish a successful business, it can be devastating to see it destroyed. It also can be exhausting to try to rebuild it, but Baumer Foods Inc. has succeeded at that challenge, President and CEO Al Baumer says. Based in Metairie, La., the company manufactures its trademark Louisiana Crystal Hot Sauce as well as its Worcestershire, steak and wing sauces. In addition, the company is the manufacturer of the Ditka’s line of sauces, the official brand of former NFL coach Mike Ditka.

Baumer says his family’s involvement in the company goes back to 1923, when his parents purchased it from a private owner. Although Baumer Foods originally focused on manufacturing snowball syrups, it changed gears when Baumer’s father discovered its recipe for Crystal Hot Sauce in the company’s archives. “My father took that and ran with it,” the younger Baumer says.

“We have advertising that goes on during the Saints’ games and in the area during the Hornets’ games,” he says, adding that Baumer Foods also advertises on LSU’s radio station.

Baumer credits the company’s longevity to the high standards it has followed in its products and services. “We give the customers the right service [and] deliver on time,” he states.

Road To Recovery
Baumer Foods has spent the past few years recovering from Hurricane Katrina’s destruction in August 2005 of its former headquarters in New Orleans. Baumer’s family also suffered a more personal loss that year.

“We lost our home and everything in it,” Baumer says, adding that he had to wait two weeks for the water level to drop before he could re-enter the city.

While waiting, Baumer searched for a new headquarters for Baumer Foods. Ultimately, he chose its current location in Metairie, at a former plastic bottling plant that spans approximately 192,000 square feet.

“We had to go through a rehabilitation to get that to be a food manufacturing plant,” Baumer continues, adding that the current building is approximately eight feet above sea level. “It had a very solid foundation.”

After months of work, Baumer Foods’ products finally hit store shelves again in January 2007. How¬ever, “We lost some ground, just because we were dealing with co-packers,” he admits.

Fortunately, Baumer Foods has maintained a strong customer following. “Our customer bases were very loyal to us,” he says. “They understood [our situation] and they stayed with [us].”

Baumer Foods also has enjoyed more efficiency in its new facility. While its previous location had production lines that ran in circles, “[Our] production lines are [now] in a straight line,” he says.

In addition, conditions are better in the newer plant. “Because the floor in the old plant was so bad, we could not use the electric lifts,” Baumer recalls. “Now we all use electric forklifts.”

According to Baumer, the work of his wife, Wakefield, Holpzalaw and Kabanni was critical to the company’s recovery. “They helped us pick up the pieces,” he says. “[They] stayed for the full recovery.”

Baumer says he sees more success ahead for his company. “We just want to continue to keep growing on solid footing and keep expanding our brand,” he states.